In 2019, Mauritius ranked 13th out of 190 countries in the Ease of Doing Business report released annually by the World Bank. It is the highest ranking achieved by the island nation since the first release of the report in 2003, and the highest of any African nation.

The World Bank cites reforms by the Mauritian government as the key reason for the jump in ratings, particularly its modernisation of the economy through automating public services, reviewing licensing procedures and introducing regulatory amendments in 2017 and 2019. Regulation around construction permits and business and property registration, and the efficiency of the tax system, among other improvements, are also noted.

‘This consolidates the country’s ongoing efforts to make Mauritius the leader in business facilitation in Africa and to be among the most business-friendly countries in the world, along with other jurisdictions such as New Zealand, Singapore, Hong Kong, the United States and the United Kingdom,’ according to a press release by PwC.

Robin Smither, head of corporate banking at AfrAsia Bank, explains that Mauritius offers both SA and global businesses the opportunity to invest in a dynamic economy and regional centre that provides direct access to the Africa-Asia corridor. The established infrastructure and investment options for foreign investment make it a choice destination from where international companies can operate their regional offices or expand their operations.

Mauritius’ Economic Development Board (EDB) is a secure platform for the global investor community. ‘It has also built a viable financial sector with local and international banks that are well placed to support activities of this nature,’ says Smither.

There are two factors that contribute to the attractiveness of the island and have drawn investors from around the world. ‘Mauritius has an investment-grade rating of Baa1 on the Moody’s rating scale, and ranks highest on the World Bank’s Ease of Doing Business index on the continent, as well as on the Ibrahim Index of African Governance,’ he says.

According to Richard Neal, MD of Sovereign Trust (SA), the combination of typically lower taxes and an efficient business-operations environment makes for an attractive arena for new ventures.

Incentivised areas include agriculture and food-processing; art and film; financial services, ICT and business process outsourcing; logistics; manufacturing; the ocean economy; and real estate and hospitality. Most of these industries receive some form of rebate or fiscal incentive from government.

Mauritius relies massively on imports and more than a quarter of its total imports are sourced from Africa, says Vidish Jugurnauth, client services director for Sovereign Trust (Mauritius). SA is one of its major trading partners. ‘It is mainly due to the proximity and trade agreements entered into between the countries,’ he says. ‘The financial services sector has also attracted a lot of interest from South Africa, especially to use Mauritius as a base to invest or do business in other parts of Africa, particularly the French-speaking African countries.’

Jugurnauth notes that the current economic drivers in the country are zero exchange control, political stability, regulated jurisdiction and an effective banking system, among others.

Since 2018, SA has been the leading export destination for Mauritian apparel products, ahead of the US, UK and France. Last year, export figures amounted to Rs5.28 billion, which represents 88% of its total exports to SA, according to ITC Trade Data from the EDB. After China, Mauritius has positioned itself as the second-biggest supplier to SA for light-knit products, including T-shirts and sweatshirts.

‘A series of regulatory developments is also positioning Mauritius as a fintech hub embracing blockchain and other disruptive technology,’ says Smither. ‘The establishment of the Mauritius Africa Fintech Hub aims to position Mauritius as the gateway for investment into and out of other African countries.’ A regulatory sandbox licence is also offered as a means of conducting business activities for innovative projects for which there is no, or an inadequate, legal or regulatory framework in the country.

As an international financial centre (IFC), Mauritius is an important recipient of investment funds and private wealth. IFC activities contributed almost 12% to the GDP in 2019, with a growth rate of 5.2%, notes Smither. 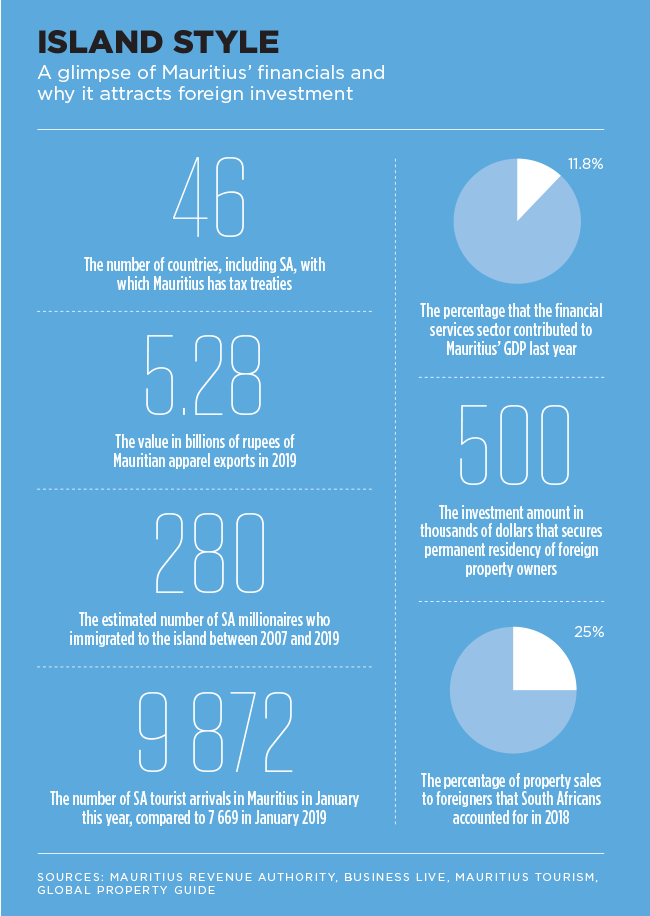 A more lenient tax system has also seen an influx of business into the country, according to Neal. Corporate and personal tax is fixed at 15%, but companies that hold a global business licence may, subject to certain conditions, benefit from incentives, such as a reduced corporate tax rate, which can be anything from 0% to 3%. These incentives also include tax holidays of up to five to eight years, access to a double taxation treaty network, and residency permits based on investment. Capital gains tax does not apply in Mauritius.

Aditi Boolell, lead advisory at Mauritian-based Temple Group (which comprises companies that specialise in legal, training and finance), explains that creating a holding company in Mauritius with a minimum of three subsidiaries outside the country allows for an eight-year tax holiday and – under the double taxation avoidance agreement – also allows for 3% effective tax for subsequent years. Along with zero capital gains tax, there is no withholding tax nor any tax on alienation of shares. Inheritance tax also doesn’t apply.

David Seinker, CEO of the Business Exchange, an SA coworking-space company, explains in an opinion piece his reasons for expanding into Mauritius. ‘We have found it to be exceptionally welcoming to foreigners, and it’s already racked up a number of African firsts in terms of international business achievements,’ he says.

These include a Top 10 spot in the Fraser Institute’s Economic Freedom of the World (2017) and a place in the Top 50 in both the 2017 Forbes Survey of Best Countries for Business and the Global Competitiveness Index (2017–2018).

‘As a property ownership destination, it has proven its worth for a number of years now, initially for holiday and second homes but, today, increasingly for residency, relocation and retirement,’ says Seinker. 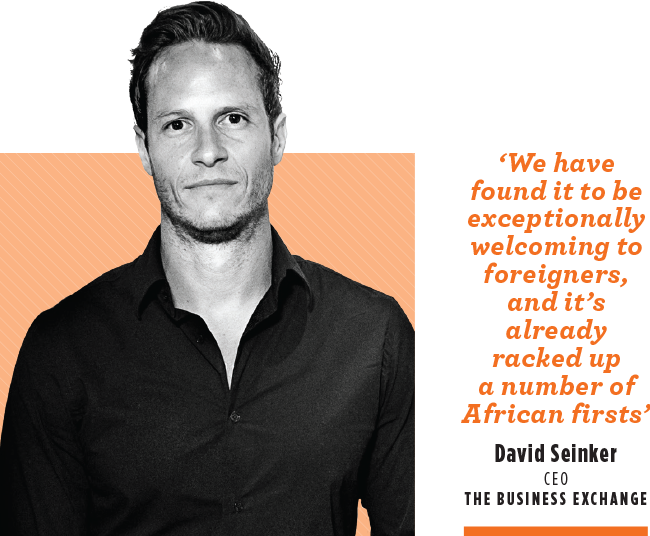 ‘A huge attraction for investors, in particular those looking to attain passive rental income, has been its property development schemes [pds] for foreign non-citizen investment. An investment of $500 000 or more in a PDS will also grant an investor permanent residence status.’ Seinker adds that aside from investing in the country, his company also plans on using it as a springboard for investments into the rest of Africa.

Mauritius currently attracts around 1.4 million tourists per year to its picture-postcard beaches, according to the latest data from Stats Mauritius, and the government plans to increase this to 2 million per year by 2025. As noted by Africantransformation.org, Mauritius has always promoted high-end tourism, directed mostly at the European market. ‘It is now moving beyond its traditional beach-resort tourism into a broader phase of tourism development with hospitality and property development.’

This includes hotels, leisure parks, green and medical tourism, restaurants, tour operators, training institutions, international conferences and airline companies. ‘Property development has the potential to attract a range of developers seeking cross-border opportunities,’ the institute states. It does, however, cite as potential issues a scarcity of beachfront sites for further hotel development and an ever-growing need for skilled manpower.

The IMF projects 3.8% GDP growth for 2020, along the same stable trend as the last few years. There’s a trove of solid data that hints at a continuation of this trend, if not increased growth.

The country ranked as the second-fastest-growing wealth market worldwide, recording an uptick of 124% between 2008 and 2018, according to the 2019 AfrAsia Bank Global Wealth Migration review.

The report attributes this growth to the nation’s security and safety, strong ownership rights, solid economic growth, a well-developed banking system, ease of investment and low tax rates. Build it and they will come, as they saying goes.