He once fit the profile of a typical youth-unemployment statistic – a matric failure with limited work prospects – but Shadrack Dhlangamandla bucked the trend. A friend recommended he enrol in a programme at Sparrow’s FET college in Sophiatown, Johannesburg. After six months of training in floor-covering installation, Dhlangamandla was placed with a company and soon became a full-time fitter, before being promoted to the position of assistant store manager.

This is the success story of just one of thousands of youth who have benefited from a Sparrow Schools programme and avoided becoming a statistic of SA’s skyrocketing unemployment problem.

Sparrow Schools was the brainchild of educationalist Jackie Gallagher. She launched the school around 25 years ago and has watched it develop from teaching just four children a week into an organisation that helps thousands of youth from impoverished communities. Today, the organisation supports 600 children and youth. According to Gallagher, it helps students complete their basic education, graduate to attend an FET college and eventually help them find employment. The positive impact is evident. In 2014/15, 70% of Sparrow’s FET college trainees found jobs, with the support of industry and corporate sponsorship, as well as corporate skills and enterprise development spend.

The institution is also one of the CSI programmes supported by Old Mutual as part of its focus on skills-capacity development. According to the company’s website: ‘The shortage of skills is one of the most difficult aspects facing South Africa’s economic future. Our interventions in this area seek to provide skills that will lead to job placement or increase the capacity of projects to create sustainable jobs.’

CSI analytics company Trialogue devoted a chapter to youth skills development in the latest edition of its CSI handbook.

‘Youth can play a key role in driving positive social change and growing the economy, but unless South Africa adequately equips its “demographic dividend” to reach and effectively channel that potential, two-thirds of our population will prove a detriment, rather than our greatest asset,’ it states.

To address the escalating unemployment rate and the extent of the skills shortage in SA, the private sector is partnering with government to identify gaps, improve on these, promote entrepreneurship and contribute towards the country’s NDP to increase employment prospects. 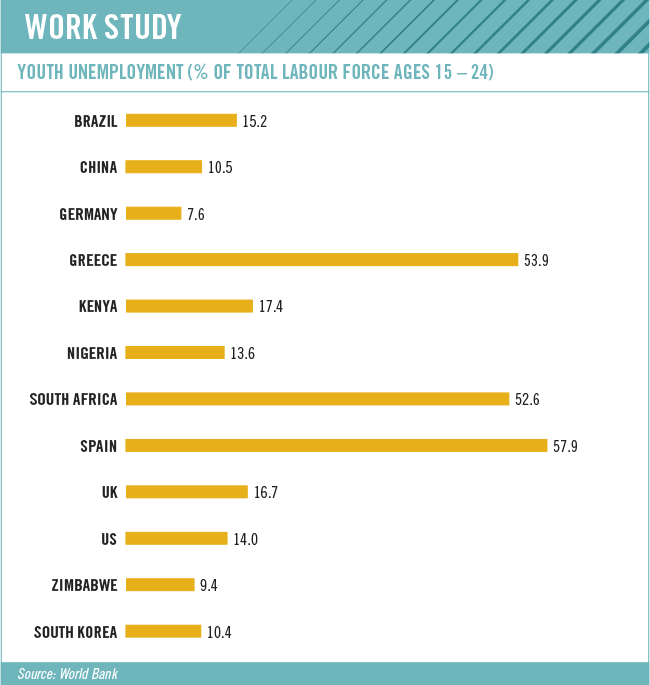 Nedbank is one of the financial institutions pooling their resources with various organisations in an effort to provide youth skills development opportunities. Its collaboration with the National Economic Education Trust – which develops skills in the ICT and marine sectors – aims to equip 40 young individuals with ICT skills and, upon graduating, ensure that they become permanently employed with Samsung or T-Systems.

ReadytoWork, created by Barclays Africa, is a pan-Africa initiative aimed at empowering young people with the skills needed to transition from basic education into the working world. It’s run through a free training curriculum available online and through facilitated sessions by trainers using the content with a focus on work, people, money and entrepreneurial skills. In partnership with several educational institutions, ReadytoWork is active in SA as well as Kenya, Mauritius, Zambia, Botswana, Seychelles and Zimbabwe.

The interactive e-learning portal is open to all and can be accessed via computers, tablets and smart phones. Over 4 500 users have registered, with about 64 000 learners over 300 schools also accessing the curriculum through a partnership with Gauteng’s Department of Basic Education.

‘This flagship initiative forms part of Barclays Africa’s plans to invest R1.4 billion in education and skills development across Africa over the next three years,’ says Sazini Mojapelo, Barclays Africa head of citizenship.

‘With more than 50% of South African youth unemployed, the ReadytoWork initiative helps train and equip young people with the necessary skills they need to enhance their employment and self-employment prospects.’

Retailer Pick n Pay is also seen as a leader in developing the skills of youth. A critical part of the company’s investment into SA has been its support for entrepreneurs – primarily through the Pick n Pay Enterprise and Supplier Development (ESD) programme and the Ackerman Pick n Pay Foundation.

Suzanne Ackerman-Berman, board director and chairman of the Ackerman Pick n Pay Foundation, says that building small business is key to the country’s economic and social development. The foundation supports community-based organisations that focus on sustainable job creation and income-generation projects.

The ESD scheme is uniquely positioned to develop entrepreneurs and small businesses by helping them understand and manage retail and industry demands – from food safety to general merchandising and accounting practices.

The retailer has consequently compiled a small-suppliers’ toolkit. The step-by-step guide is designed to help small businesses develop their product so that they become successful Pick n Pay suppliers.

‘We believe large retailers have a responsibility to support local small-business development. In the 2015 financial year, we spent over R40 billion in supporting South African suppliers, with 94% of our fresh-food products being procured from local suppliers,’ says Ackerman-Berman.

Additionally, Pick n Pay partners with training institutions that give young people the chance to develop the skills they need to find work.

The mining industry has also been instrumental in trying to bridge the skills gaps, although in many cases its efforts are stymied by falling metal prices. Platinum miner Lonmin, for example, offers innovative skills upliftment programmes. However, some of these are on hold as they seek funding to continue operating in the current environment. 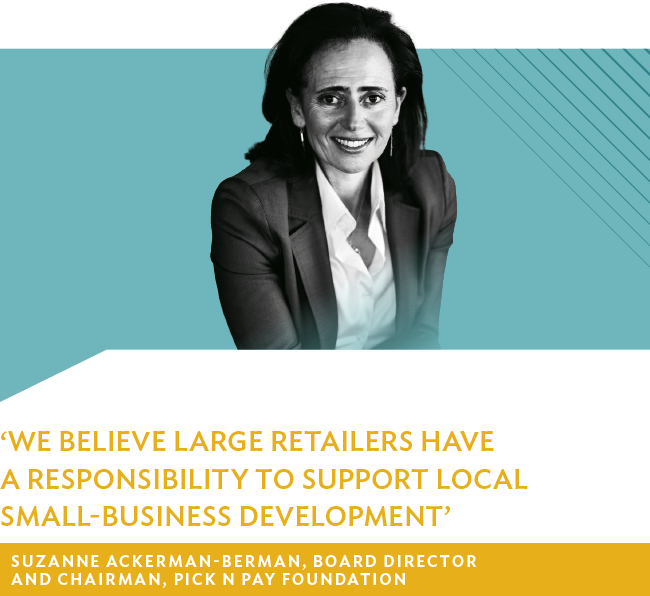 Lonmin is in discussions with the Mining Qualifications Authority (a sectoral education and training authority) to co-fund community skills development programmes and projects. In June 2015, Lonmin – as part of South Africa’s Youth Month – intensified its own efforts by committing to training 500 young people from the Bapo ba Mogale traditional community in the North West in entry-level mining skills. Its aim is to prepare the trainees for jobs at its Brits, Rustenburg and Marikana mines.

Anglo American is another miner with skills training at the heart of its CSI focus. It takes its skills training a step further by reaching out to communities that aren’t necessarily involved with its mines. Kumba Iron Ore, for example – via its Tshipi Skills Training Centre (through Sishen mine in the Northern Cape) – has trained thousands of young people in fields such as carpentry, plumbing and masonry.

Ithala Development Finance Corporation also has a range of learning and skills development programmes. Work experience is provided by internships and in-service training offered to students, giving them a chance to experience the working world in their chosen field of study.

‘Many learners have graduated through Ithala’s participation in the Bankseta learnership programme, the focus of which is to contribute to the objectives of the Financial Sector Charter by developing the competencies of learners from previously disadvantaged backgrounds in KwaZulu-Natal,’ says Themba Mathe, Ithala executive for HR, communications and marketing.

Not only are corporates creating their own intiatives, they’re also using their collective power to make a difference. The Harambee Youth Employment Accelerator is one programme proving to be successful at tackling the demand-supply mismatch in SA with its innovative market and social solutions – bridging the gap by recruiting candidates, assessing their competencies and matching them to jobs where they are most likely to succeed.

The numbers speak for themselves. Harambee now serves more than 100 corporate employers across diverse sectors and has already created jobs for more than 10 000 people – a target it hopes to achieve on an annual basis while bringing 500 000 young people closer to the labour market by 2020.

At the release of the World Bank’s 2015 South Africa Economic Update, lead economist for SA Catriona Purfield said that if the youth could find jobs, the economy could win big. ‘When there are more people working in the age bracket 15 to 64, there are less children, less old-age people to support, people are working and there is more space for savings.’