Next in line - JSE MAGAZINE

Apparently the US is on the edge of a $30 trillion transfer of wealth from baby boomers to Generation X and millennials, which creates all sorts of issues – from the use of technology in investing, a distrust of the financial system, and the vulnerability of the wealth management sector in general.

Fragmentation is one of the main culprits in the ebbing of intergenerational wealth, meaning one piece of the inheritance pie often has to feed many an heir. Poor investment decisions, bad tax planning and intra-familial politics are also little gremlins that can eat away Pacman-like at substantial wealth, which often doesn’t stretch beyond the next generation. Increasingly complex tax, estate planning and exchange controls have also added kindling to the fire. This is according to Marc Romberg, joint head of wealth management for Investec Wealth and Investment South Africa.

At a series of events, Investec asked a total of 1 331 clients what was more important to them when it came to wealth transfer – ensuring heirs are better off; or contributing to the community, society at large, or the environment. At 76% the audience voted resoundingly in favour of their heirs, with 24% saying they wanted to contribute to the greater good of society.

The timing of the wealth transfer requires careful consideration, says Elana Nel, director in the tax advisory division at Stonehage Fleming. ‘A transfer when the next generation is not ready for the responsibility can do substantial damage, but waiting too long can also be detrimental to the growth of wealth and family relationships.’ Thorough and successful wealth planning starts with open and transparent conversation as early as possible. ‘Families who transfer wealth positively are the ones who start the conversation early,’ says Romberg. ‘They educate and mentor.’

It seems an obvious point to talk to heirs about the responsibility of inheriting wealth that could span generations but it seems that testators are content with silence even among their peers. A 2018 survey by Merril Private Wealth Manage-ment found that 64% of wealthy individuals have not discussed with family members how they plan to transfer their assets. While 48% plan to communicate this information eventually, or assume family members already know, 10% say they will never divulge the details of their estate plan as they consider it a personal affair. Nel agrees with Romberg in saying that insufficient preparation, including communication and education of the next generation, is the nexus of future issues in the transferral of wealth. 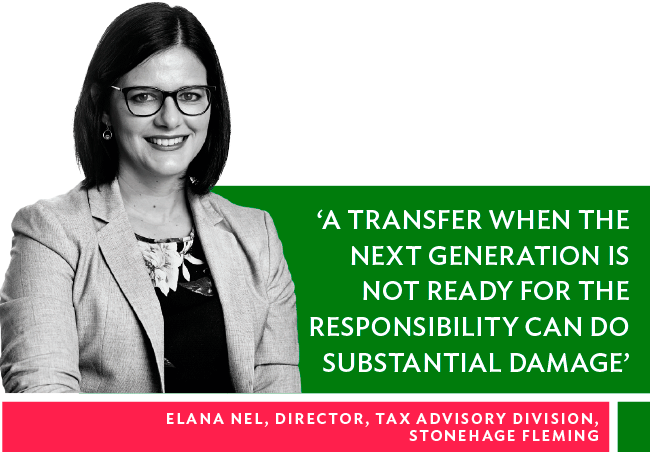 Families must be transparent about their assets, and the maintenance and growth thereof. A limited alignment of goals defining a unified mission for current and future generations, including the purpose, vision and values for the family is essential, she explains. Culture, family dynamics, along with other issues of suitability and willingness of heirs are other thorny issues to contend with. In other words, focus on the politics and the means of transfer. ‘Perhaps the most important consideration in deciding which option to choose is whether your heirs have the financial wisdom to manage their inheritance. Do they have the skills to draw up a monthly budget and stay within the budget? Will they maintain an emergency fund, save money every month and avoid overspending? Will they engage with a skilled adviser to make investment decisions?’ asks Elbe Thatcher, a fiduciary specialist at Old Mutual Wealth. The way you transfer your wealth will depend on the answers to all of these questions.

Thatcher lists the following options and explanations for wealth transfer. The family can donate wealth over time to heirs in a tax-efficient way, or make a direct bequest in a will, which is a simple and effective method if they are satisfied that heirs have sufficient financial knowledge and will not squander the inheritance but manage it wisely. Otherwise, there is the option to bequeath the inheritance to a trust for the benefit of the heirs, wherein the trustees act as gatekeepers, administering the funds on behalf of the heirs. A combined approach is another option where family can donate a small amount directly to the heir and place the balance in trust for their benefit.

The family can also bequeath the inheritance to an incentive trust, in which the trustees will reward the beneficiaries with income or capital distributions, provided they comply with certain incentives as stipulated by the testator. This can include ‘achievements’ such as getting a degree, securing full-time employment or reaching savings goals, Thatcher explains. However, she adds, if you as testator were not able to instil financial wisdom in your heirs in your own lifetime, you should not expect trustees to enforce it when you aren’t around anymore.

How families decide to transfer wealth is dependent on the unique circumstances of each family. ‘No single method applies in all situations,’ says Shaun Kotwal, head of wealth and investments at Standard Bank. However, having said this, one of the best-known yet not necessarily widely used means of transfer is through a will, which has the simple advantage of no estate duty for transfers between spouses, and for roll-overs, he explains.

In other instances, the size and complexity of the transfer often call for a trust or company structure. ‘A benefit of the trust structure is that beneficiaries can benefit from the trust with immediate effect,’ says Kotwal. ‘It ensures liquidity when it is needed most.’ On the other hand, an estate administration process can be lengthy. Fees, including executors’ fees, can also be avoided when using a trust. Set up the trust as soon as possible, he says. ‘It’s often best to set up the trust at an early stage to avoid additional tax liabilities, and not only once you have already built your wealth in a personal capacity.’ 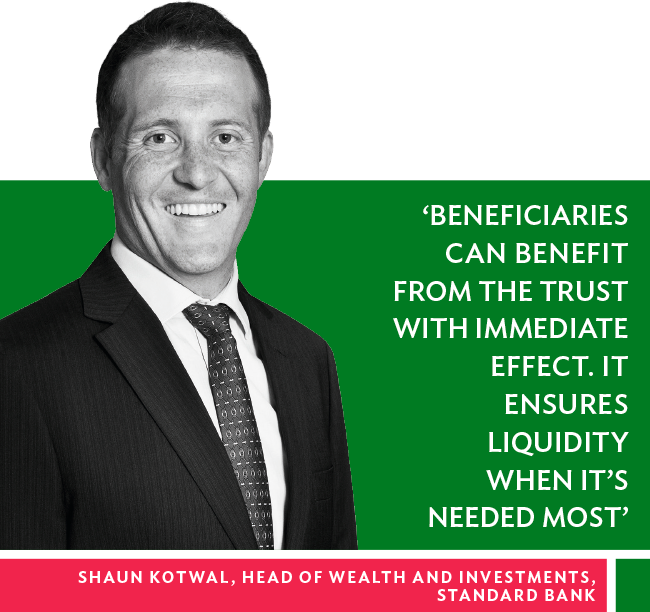 Other considerations include business continuity, which is a major concern for families with operating companies. The appropriate structures to leave a legacy for philanthropic purposes often requires professional advice, he explains. Many wealthy families have adopted a family constitution as a way of instilling values and managing conflict. While a family constitution is a non-binding document that can take many forms, it is a robust way to manage the intergenerational wealth transfer and build consensus around key issues, including who runs the family business; key ethical and moral issues; investment strategies; and the family’s philanthropic vision. ‘The family constitution can be as detailed and formal, or short and simple, as you like, provided it clarifies and supports the family’s key philosophies,’ says Romberg. Where families reside and the location of their assets must also be considered in the drafting of a will.

Kotwal warns clients against restrictive provisions clauses in a last will and trust deeds. ‘Outdated or inflexible structures may not stand the test of time, and regulatory changes may lead to the unintended consequences the family never planned on,’ he says. ‘Often the lack of liquidity to fund expenses, [pay] taxes or support heirs requires assets to be sold and unfavourable prices achieved.’

He goes on to explain that highly complex and convoluted structures aren’t always practical, and while tax mitigation and planning is important, they should not be the sole purposes for planning. ‘Tax laws are amended from time to time and therefore suitability, commerciality and practicality should have preference in planning.’ Nel, meanwhile, says the value of assets and the base cost of assets will play a role in deciding the method of transferral. For instance, assets held in a trust may not require a physical transfer, and simple changes in the decision-making structures may be sufficient.

These transfers can potentially trigger various taxes, such as capital gains tax, donations tax, transfer duty and securities transfer tax, depending on the type of assets being transferred and the method of transfer. Estate duty (on death) and donations tax (during a person’s lifetime) carry the same tax rate but for immovable property specifically, says Nel, whereas transfer on death could be more cost-effective than transfer during the owner’s lifetime.