A recent survey of UK teenagers, carried out by gaming accessories firm HyperX, produced a whoppingly unsurprising result: the majority of respondents (55%, all of them teens) said they wanted computer gaming to be added to the school curriculum. It’s not just fun and games, though. As Dieter Declercq, a lecturer in film and media studies at the University of Kent, pointed out when the survey results were published, there is ‘an educational value inherent in modern gaming’.

Glenn Gillis agrees. Pointing to skills such as problem-solving, creativity, design, strategic thinking, self-awareness, and socio-emotional and communication skills, Gillis – the founder and MD of Cape Town-based gaming and augmented reality studio Sea Monster – says these can ‘be very effectively taught using smartly designed technology that takes a radically different and broader approach to education’, including digital learning content, apps and experienced-based learning. ‘We need only look at the success of online games like Fortnite to see the potential here,’ says Gillis. ‘Why not apply that in our education system and even further, into the corporate education space? For example, an online game or app could give the learner feedback on how they’re doing on foundational skills like decision-making or communication, and suggest strategies for greater success in those areas.’

Survive the Century provides a planet-saving example of exactly that. A text-based game, launched in May 2021 by UCT’s African Climate and Development Initiative, Survive the Century challenges players to take on the role of editor of a popular newspaper and choose headlines that influence public opinion and political responses to climate change (including a ‘green’ recovery from the COVID pandemic). In interactive, choose-your-own-adventure style, your choices shape the future. The scenarios that result are based on science, from rolling out COVID-19 vaccines to funding tech that could either restore order or trigger anarchy. It’s fun, it’s funny, and it incorporates short fiction from sci-fi novelists including Lauren Beukes, Rajat Chaudhuri and Maria Turtschaninoff.

‘This is a game for everyone, but particularly for climate nihilistic Gen Zs who know about climate change, and feel hopeless and frustrated at the inaction they are seeing,’ Samantha Beckbessinger, one of the game’s creators, told Thomson Reuters. ‘We wanted to engage them with a sense of hopefulness that the future is long, and there are a lot of choices ahead of us.’ At the end of the game, players are directed to a climate organisation near them.

‘Play can be an incredibly powerful way to engage people, and it isn’t didactic,’ adds Beckbessinger. ‘It doesn’t aim to tell you facts and things to do. It lets you play and explore.’

SA banks are wise to this and are using online games to promote financial education among their customers. While Sanlam premiered its Moola-Money Family Game Show on eTV this past April, a handful of rival banks and financial services providers have been going the gaming route – arguably with greater impact.

Old Mutual’s Moneyversity – developed by Sea Monster and now in its second iteration – gamifies the basics of financial education, with a series of animated courses and tests pitched at beginner, intermediate and advanced levels. Players (or, in this case, users) are rewarded with badges and certificates as they work their way through each level, staying motivated and engaged as they play, learn and conquer their fears of what is an important yet, for many, fairly dull subject. According to Sea Monster, Moneyversity has shown positive player adoption. ‘Careful consideration has been given to designing the courses in a way that makes it easy for players to navigate through the challenges that the learning platform offers,’ the company states on its website. ‘And as a result it’s a regular topic at edtech forums.’ 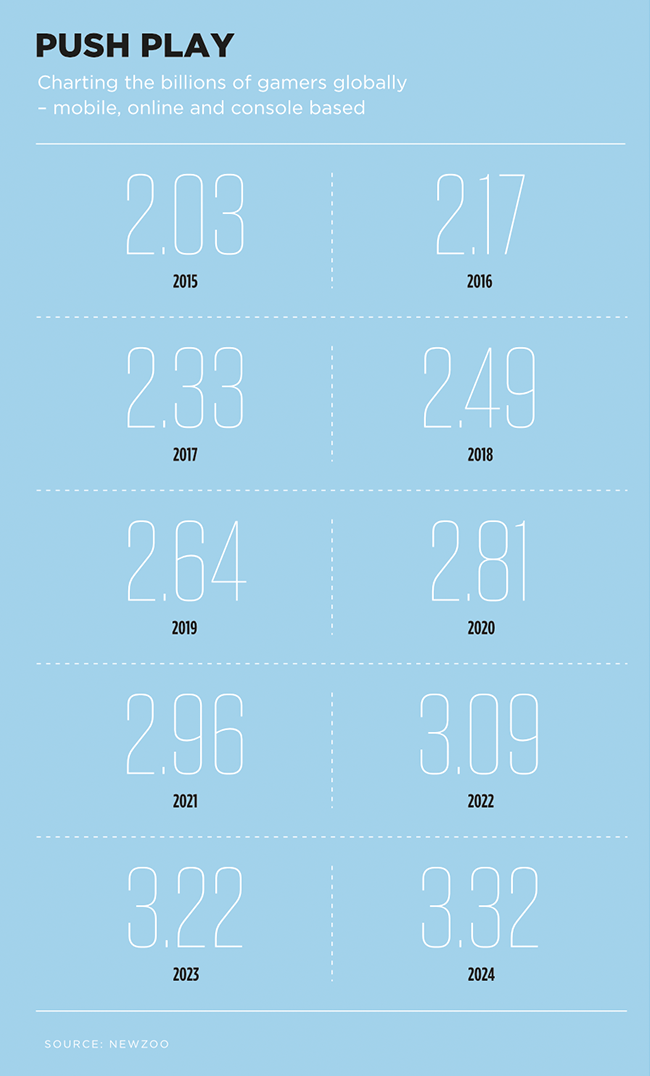 FNB’s Fundaba – another Sea Monster development – takes players/users through 12 modules across four life-cycle stages of an SME: incubate, start, run and grow. The game follows an entrepreneur’s journey as he builds his first business, Lebo’s Bakery, with practical business problems unpacked through advice and education.

Then there’s Capitec’s Livin’ It Up – a mobile game that teaches players how to balance their daily money decisions against their long-term financial goals; while the same bank’s Budget Champs is pitched at Grade 7 to 9 learners, and teaches financial concepts in a fun, accessible way.

Consider all of that against a backdrop where, according to market researchers GameAnalytics, the monthly number of mobile gamers worldwide grew from 1.2 billion to 1.75 billion during the first quarter of 2020 alone, marking an increase of 46%. In SA, the total revenue generated from the video industry was estimated at more than R3 billion in 2017; and that number is expected to grow at a CAGR of 15% to reach R6.2 billion by 2022.

South Africans are gaming. It makes sense to reach – and teach – them via games. The key, however counter-intuitive this may seem, appears to lie in emphasising the gaming over the learning.

‘Just sprinkling game design on top of learning content doesn’t make it a game,’ says Henrike Lode. ‘It is still a multiple-choice test if you take away all the effects and visuals.’ Lode heads up the Serious Games course, offered as part of the Wits University’s game-design degree. ‘I struggled with education and authority in high school,’ she adds. ‘It killed my love for learning because it was about authority, and not about the excitement of finding out more. Gaming can transform education with joy.’

Yet take another look at the name of Lode’s course: Serious Games. As she told Wits research magazine Curiosity, ‘serious games’ are those that have an educational or informative narrative, without compromising the quality and enjoyment of the gameplay itself. Importantly, though, these kinds of games bring empathy to other human experiences, helping people understand what it’s like to be someone else by exploring themes such as sexual identity, language and privilege.

Recent course alumni have produced ‘serious’ games such as Time’s Up!, in which players use electrical components to create a closed circuit with a specific set of components and requirements; or birthright (with an intentional lower case), which explores weighty topics – gender and racial privilege among them. Here, players start the game with a roll of the dice that determines their race and gender. ‘I learnt so much about social context when I arrived at Wits, and it was important to me as a white, Afrikaans person to explore and learn more about the concept of privilege,’ says birthright creator Janharm Labuschagne. ‘This can be a difficult concept to talk about, but hopefully my game allows for this concept to be explored through play.’

Grappling with climate change in Survive the Century. Starting a small business in Fundaba. Learning a language in Ambani. Exploring social dynamics in birthright. These games may not have the bangs and whizzes of Fortnite or FIFA 22, but they land an impact… And, as SA’s major banks are showing, playing is serious business.