Dubai is home to the Burj Khalifa, the world’s tallest building. Neighbouring the Burj is the Dubai Mall, the world’s largest shopping centre, in terms of total area. And there, in the faded denim-blue waters of the Persian Gulf, is the group of man-made islands shaped like a world map. Dubai, and a big part of the UAE, is an ode to extravagance and opulence. An empire dedicated not so much to the accrual of wealth but an audacious exhibition of it. So, who else then to host the world’s first global expo?

Expo 2020 was to welcome 192 countries, including businesses, multilateral organisations and educational establishments in October this year. The ‘global mega-event, a once-in-a-lifetime celebration’ would have been ‘the largest event ever staged in the Arab world’. Hyperbole aside, it was a huge undertaking even in UAE terms, an event that required its own infrastructure and buildings much in the same way that countries prepare when hosting the Olympics. Expo 2020 had its own city built just for the occasion. And then came COVID.

The pandemic has left organisers with no choice but to postpone the event to 2021. It has been much of the same for, well, almost everything across the globe. Business, trade, events, tourism, cigarette smoking… Everything has had to take a back seat while the pandemic runs its course, and runs amok doing so.

‘The global mega-event will now run from 1 October 2021 to 31 March 2022, a delay that allows all participants to safely navigate the impact of COVID-19, and allows the World Expo to focus on a collective desire for new thinking to identify solutions to some of the greatest challenges of our time,’ the organisers explain in a press release.

27 April, 2020. All 829.8 metres of the Burj Khalifa were painted with light in the colours of the SA flag – the flag’s black triangle on its side framed by yellow and green at the base of the world’s tallest building in commemoration of Freedom Day in SA. 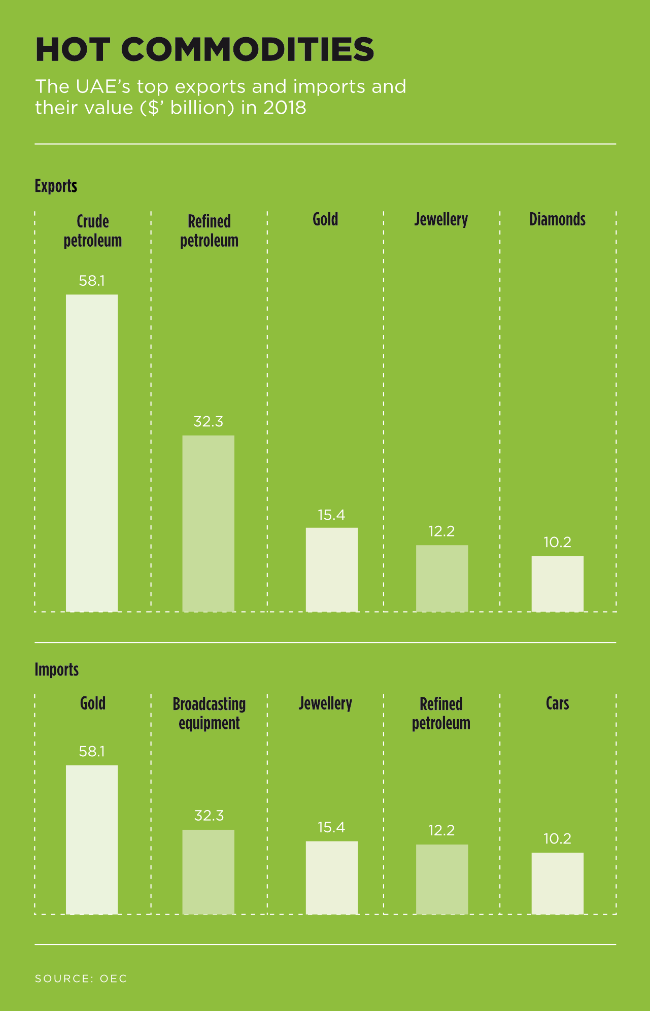 The UAE has seen a growing community of South Africans, lured there in part by a growing demand for SA labour, especially in construction, hospitality, financial, medical, retail management and education.

‘Local employers have come to know and appreciate the quality and professionalism of SA expatriates,’ says the SA government on the Department of International Relations and Co-operation website.

It is largely due to an intensive diversification strategy by the UAE that the region has dramatically decreased its reliance on oil in the last decade. SA household brands such as Nando’s, Butcher Shop, Mugg & Bean, Meat Co, Mediclinic, Standard Bank and Debonairs Pizza have established businesses in the region, along with companies based in the energy, engineering, travel and hospitality, trading and HR consultancy sectors.

SA company Provantage Media Group was recently awarded the rights to all airport advertising management at Sharjah International Airport in the UAE for eight years. Mzukisi Deliwe, deputy CEO of Provantage, explains that the UAE has become a vibrant and targeted business investment destination for companies involved in the broader oil business value chain, along with becoming one of the world’s top tourism and shopping destinations. (The total contribution of the travel and tourism sector to the UAE’s GDP was $43.3 billion, 12.1% of total GDP.)

‘The UAE has launched several initiatives to further boost the travel and tourism sector, and this clearly shows a lessening of the reliance of oil as a revenue driver,’ according to Deliwe. ‘Thus, for companies looking to invest outside of South Africa, the region is an increasingly attractive one for any number of industry verticals.’

Speaking about Provantage’s business at Sharjah International, he explains that the company aims to utilise the airport rights as a base, and look for other appropriate opportunities. Sharjah Airport is a springboard to introduce other business unit offerings, such as billboards, malls and transit in the city and further into the UAE and the broader region.

‘The region should certainly be seen as an investment destination,’ he says. ‘Being present in the UAE can also be seen as a springboard into the international environment. For instance, now that we are present in Sharjah, we are better able to evaluate other appropriate opportunities within the UAE, North Africa and Asia.’ Provantage has been invited to showcase proposals for other opportunities in the region, the Queen Alia International Airport in Amman, Jordan, being one of them.

Deliwe explains that having business operations in the UAE also makes sense from a strategic geographical perspective. ‘Globally, it is more central than South Africa,’ he says. ‘Being there enables us – and any company investing in the region – to be in touch with opportunities in the UAE but also other desirable investment destinations, including the broader Middle East area, Australasia, India, Europe and the UK.’ 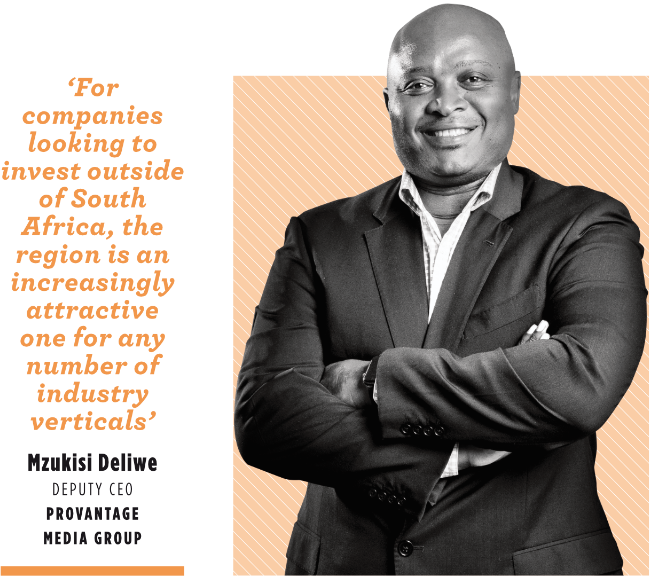 Richard Harris, president of the South African Business Council in the UAE, also notes Dubai’s strategic location. ‘South African companies can come and set up a branch here and access not only North Africa, but indirectly into Europe and the Asian markets,’ Harris told How We Made It In Africa.

According to the Observatory of Economic Complexity (OEC), the UAE ranked 28th in the world in terms of GDP, and came in at 55 in the world for the most complex economy in the Economic Complexity Index in 2018. Top exports in the same year included crude petroleum, refined petroleum, gold, jewellery, and diamonds. The top imports were gold, broadcasting equipment, jewellery, refined petroleum and cars.

The top opportunities for the UAE in terms of exports are mostly in the form of natural resources and agriculture, including ammonia, wheat flours, raw cotton, other oily seeds, and non-fillet fresh fish, says the OEC, which measures opportunity based on ‘relatedness’ – the distance between a country’s current exports and each product.

While the impact of the crisis hasn’t been as severe as in other parts of the world (Dubai’s GDP showed a 3.5% drop in Q1 2020), the tourism industry has been hard hit.

As reported by the Gulf News, the hotel, and food and beverage industries in Dubai were down 14.8% from the same period in 2019. They contributed 5.1% to the economy last year. ‘The decline was expected, given the movement restrictions in place during the height of the lockdown as well as the prohibition of foreign and domestic tourism, and the temporary closure of hospitality establishments,’ according to the Dubai Statistics Centre.

Dubai’s tourism numbers at the beginning of the year were proving better than 2019 over the same period, recording 3.27 million international guests in 2020 against 3.14 million in 2019, according to the Tourism Performance report by Dubai Tourism.

In June this year, Helal Saeed Almarri, director-general of Dubai’s Department of Tourism and Commerce Marketing, said that ‘with travel behaviours remaining fluid and travellers set to become even more discerning and prudent in their travel choices, we welcome the commitment shown by our partners to work together to help prepare the ground for a meaningful tourism restart so that the industry is well positioned to capture growth when the situation improves’.

Dubai reopened its borders to international visitors and tourists on 7 July. While it would be foolhardy to make a call on the extent to which the tourism industry in the UAE will claw its way back from the corona crater, the rest of the economy serves as a reminder that healthy – and wealthy – nations have a better fighting chance.

It is hoped that the SA flag shines bright in Dubai and the rest of the UAE in future, beginning with SA’s pavilion at the Expo 2021.