When a plane crashes, the pilot loses their life along with the passengers and crew. But when a company crashes, often the chief executive walks away mostly unscathed. Henley Business School Africa dean Jon Foster-Pedley uses this example in a newspaper article to argue that captains of business need better situation awareness and accountability. ‘The only way we can change this is to create a society where those captains feel the full brunt of the consequences of their actions – to their reputations, to their careers and to their liberty,’ he says.

This is already happening in SA, where recent corporate scandals have brought ‘delinquent’ directors into the spotlight and caused a public outcry to ‘make them pay’ for their actions. As a result, there’s now intense scrutiny of all directors in SA – including the vast majority who are leading their organisations with due diligence. Pressure is mounting from all sides, expecting directors to drive financial profit while leading their organisations responsibly regarding environmental, social and governance risks, and satisfying the ever-growing demand for more transparency and accountability. ‘Increased focus by regulators is leading to a greater risk of investigation and enforcement action,’ says Alexandra Blair Schudel, head of financial lines at Chubb SA. ‘At the same time shareholders are becoming more active in their scrutiny of management performance, and more willing to sue when they feel it falls short.’

SA law is clear in that directors are personally liable and can be punished severely if found guilty of misconduct. ‘Directors could be subject to criminal sanctions like fines, jail time and even disqualification from serving as a director in future if they have failed to perform their duties,’ according to Parmi Natesan, CEO of the Institute of Directors in Southern Africa (IoDSA). ‘It is now well established that directors bear the ultimate responsibility for any unethical behaviour that occurs within their organisations. We have already seen some examples of directors falling on their swords when corruption becomes apparent, and we can expect demands for this level of accountability to intensify.’ 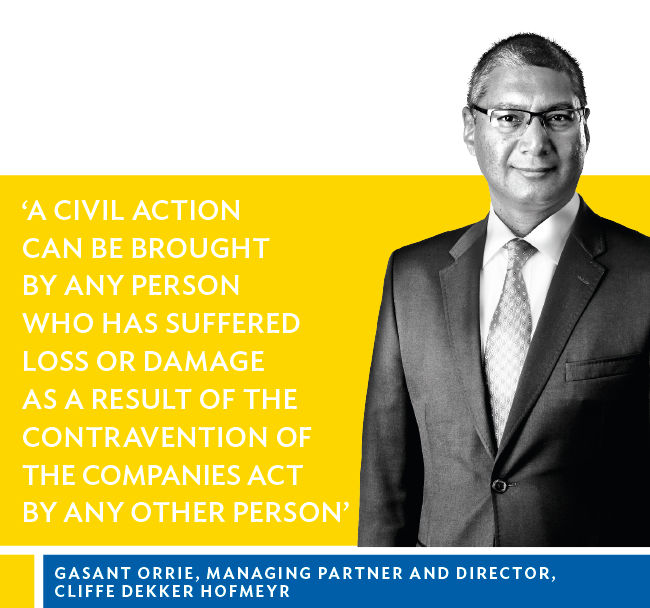 Natesan explains that directors’ duties as set out in SA’s common law and in the Companies Act include the fiduciary duty to act in good faith and for a proper purpose in the best interests of the company, and also acting with due care, skill and diligence. That said, broad terms such as ‘good faith’ and ‘due diligence’ can be open to interpretation, and directors are concerned about their liability risk. ‘With the improvements made to the Companies Act and the developments in our corporate governance codes and practices, it is becoming easier for stakeholders to bring allegations of wrongdoing against directors,’ says Philip Hobson, head of financial lines at AIG South Africa. ‘In addition, the business environment is as tough as it has ever been and directors are faced with decisions on a daily basis where external and internal factors outside of their control can play a role in the outcome of their decisions.’

The Companies Act makes various provisions for a company, creditors and third parties who have suffered loss to hold directors personally  liable, according to Gasant Orrie, Cape managing partner and director in corporate and commercial at law firm Cliffe Dekker Hofmeyr (CDH). What’s more, he adds, ‘Section 218 of the Companies Act provides that a civil action can be brought by any person who has suffered loss or damage as a result of the contravention of the Companies Act by any other person, including directors. This essentially provides a civil remedy for third-party loss’.

His CDH colleague Justine Krige, who is also a director in the corporate and commercial department, explains that directors can be held personally liable if, for example, they are acting on behalf of the company without having the necessary authority; if they are trading recklessly, with gross negligence or the intent to defraud or for fraudulent purposes; if they authorise the publication of ‘materially false’ financial statements; or if they fail to vote against unauthorised company decisions (such as the issuing of unauthorised shares or securities, or providing unauthorised financial assistance, among others).

Natascha Harduth, director at Werksmans Attorneys, adds that directors can be found guilty of a criminal offence if they were ‘knowingly party to an act or omission by a company calculated to defraud a creditor or employee of the company, or a holder of the company’s securities, or with another fraudulent purpose’.

Directors also have to consider the environmental impact of their decisions, particularly in the extractive industries, and increasingly in waste, chemical, steel and metals, too. Directors, board members, executive committee members, as well as contractors and senior managers can be held personally liable under the National Environmental Management Act – with environmental transgressions leading to fines of up to R10 million and a maximum 10-year jail sentence. ‘Application of this principle was demonstrated in the landmark Blue Platinum Venture case in terms of which a director was criminally convicted and sentenced to five years imprisonment for environmental degradation arising from clay-mining activities,’ says Garyn Rapson, partner and environmental lawyer at Webber Wentzel. ‘The sentence was, however, suspended for five years on condition that the affected areas were rehabilitated within a period of three months. The costs of rehabilitation were estimated to be in the region of R6.8 million. The Blue Platinum and similar prosecutions are a clarion call for directors and other company officers across all sectors to exercise a higher degree of vigilance and compliance with environmental legal obligations, ultimately contributing towards the minimisation of environmental harm.’

As a result of stricter investigations and mounting allegations against directors, the premiums for director and officer (D&O) liability insurance are increasing, with terms and conditions tightening. This is a worldwide trend, set by the US, followed by the UK and Europe, and now SA. ‘With the recent proliferation of corporate scandals in South Africa and abroad, interest in D&O liability insurance is growing – both within the insurance industry and among the companies and individuals that D&O insurance protects,’ according to Blair Schudel. ‘This is why it is a good time for companies to review their D&O arrangements and ensure that they have the right coverage in place. For companies that trade across several countries, it’s also important to ensure that their insurance programme is designed to perform effectively across different jurisdictions and meet local regulatory and tax requirements.’

Although the company pays the premium, D&O insurance does not protect the company but is specifically aimed at directors and officers, including management and company secretaries. It serves as a catch-all against any imaginable personal breach of fiduciary duty, covering – alleged or actual – breach of trust, omission, error, misleading statement, neglect of duty, employment-related issue or any other matter claimed against the insured director. But it draws the line at deliberate or fraudulent misconduct. ‘The policy cannot indemnify a director where there is found to be criminal conduct, such as fraud or sexual harassment,’ says Hobson. ‘In such cases, should a defence have been afforded to a director prior to the conduct being found to be criminal, the insurer will look to recover these funds from the director.’

He adds that some sectors have a higher liability risk than others from an exposure perspective. ‘An insurer would need to look at the underlying risks that are inherent to a particular sector or business. Key factors that are considered in the underwriting process are financial health, type of shareholding, services provided, geographic exposure and corporate governance. Companies that have any US exposure, are publicly listed, or have a potential to find themselves in financial difficulty, would be at a greater risk,’ says Hobson. 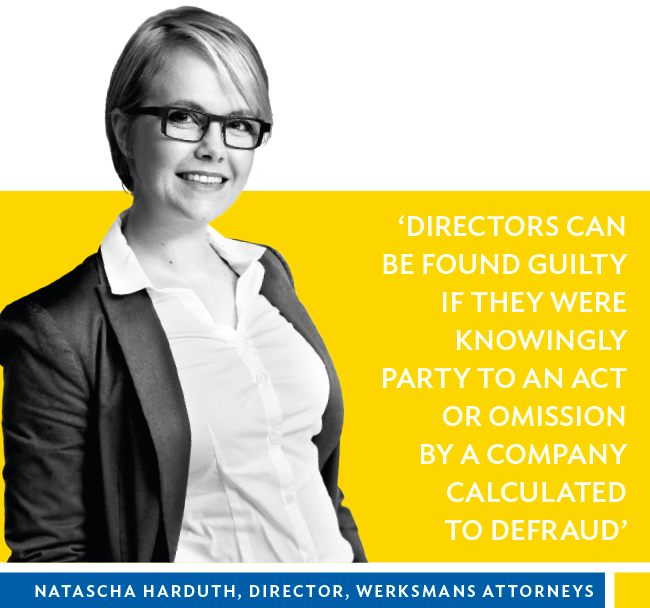 However, it’s a business reality that some decisions made in good faith turn out to be wrong or result in loss. Therefore directors shouldn’t automatically become scapegoats for everything that goes wrong – for instance, when the share price drops. Harduth quotes a 2016 case (Itzikowitz vs Absa) that cleared the directors, saying: ‘Our courts have determined that there is an insufficient causal link between harm suffered by a company as a result of a breach of a duty owed to it by its directors, and any loss suffered by its shareholders in consequence of a fall in the company’s share price.’

Essentially, directors’ duties and related potential liabilities should not prevent them from taking the necessary bold decisions that are often required to drive growth and success, says Natesan. She mentions the business judgment rule, which can assist directors in defending bad decisions, provided they are able to demonstrate that they acted in the best interests of the company at the time, with the required skill and care, and without any personal financial interest.

There’s also the question on how many boards individual directors should sit and still be able to prepare adequately and contribute meaningfully to each one. The IoDSA refers to research by Henley Business School, which suggests limiting this number to four. ‘It’s a good rule of thumb but we are wary of applying it blindly,’ says Natesan, highlighting a ‘peculiarly South African twist’. The pool of competent directors in SA, she says, ‘is relatively small, so the more boards an individual serves on could affect the diversity of directorship in general – at least if the majority of perceived experienced non-executive directors remain from the same traditional pool’.

While initiatives are under way to increase this pool, it’s also crucial to understand the role of ordinary citizens in preventing corporate crashes. Unlike aircraft passengers who are at their pilot’s mercy, civil society has the means to keep their ‘captains’ on track. For example, action groups such as OUTA (Organisation Undoing Tax Abuse) are putting pressure on dysfunctional parastatals, and the faith-based Benchmarks Foundation is holding mining companies accountable for their environmental and socio-economic impact.

So while directors shouldn’t shy away from taking business risks, they must know their fiduciary duties, be aware of what’s going on in their organisation, and instil an ethical corporate culture that filters down and includes external auditors. Because when business leaders are truly committed to good governance, they won’t need to fear being personally held liable – and are more likely to steer their company away from potential crashes.