Worldwide, tourism is one of the largest and most rapidly expanding industries, routinely outperforming the global economy. It supports one in 10 jobs, and contributes a similar percentage of global GDP, according to Gloria Guevara, president and CEO of the World Travel and Tourism Council (WTTC).

This makes it a particularly powerful force in a tourist-friendly country such as SA, with its scenic beauty and world-class facilities. As Brand South Africa boasts, ‘the country is highly diverse in terms of its climate, culture, tourist activities and infrastructure, catering for every tourism niche’.

Nationally, the sector supports, directly and indirectly, an impressive 1.5 million jobs – 9.5% of total employment in the country, and 9% of GDP. Tourism contributed nearly R450 billion to the SA economy in 2018, more than any previous year. The WTTC estimates that by 2028, just more than 2 million jobs in SA will depend on tourism. This makes it a larger contributor to the economy than agriculture (though still less impactful than traditional sectors such as construction and mining).

The industry has also been outshining others in terms of job creation, adding more than 40 000 jobs between 2012 and to 2016 – outperforming the long-established fields of trade, manufacturing and utilities. And the trend is accelerating. Between 2015 and 2016, for example, the influx of Chinese tourists grew by 38%; while Indian and German visitor numbers both increased by 22%. Tourists from SADC countries – notably, Lesotho and Botswana – are also a significant force.

It should be noted, however, that there are difficulties with recording data in a various and shape-shifting business. Tourism is not listed as a distinct industry in the international Standard Industrial Classification (SIC) system, as it operates across many worlds. The tricky thing, according to Stats SA, ‘is that tourism related activities occur across multiple industries… Hotels, for example, fall under the trade industry in terms of the SIC, while tour buses are classified under the transport, storage and communication industry’. 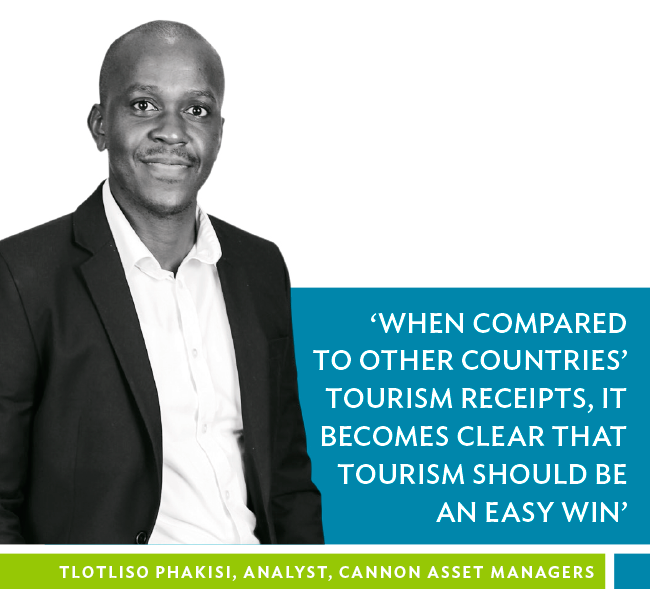 Nonetheless, the impact of the tourism boom on the SA economy is undeniable. As Cannon Asset Managers investment analyst Tlotliso Phakisi says, ‘when compared to other countries’ tourism receipts, it becomes clear that tourism should be an easy win for South Africa’. One of the most exciting sectors in this tourism boom is business tourism. It might not be the first thing one associates with the sun-sea-wine-and-wildlife image of SA tourism, but it’s a hidden treasure with enormous potential to revitalise the sector. With its sophisticated infrastructure, natural beauty, favourable exchange rate and at least 1 700 world-class conference and exhibition venues – the largest of which can accommodate more than 20 000 delegates – SA is an ideal business location.

In 2018, Cape Town was voted the number one city in Africa for business tourism events by the International Congress and Convention Association.

‘Cape Town climbed 15 places to be ranked in the Top 40 destinations for business tourism in the world. This was the fourth consecutive year that the city had won the award,’ says Lance Greyling, director of enterprise and investment at the City of Cape Town.

‘Professionals and businesspeople visiting Cape Town for conferences and meetings often extend their stay to explore the city or book a return trip with family and friends. Business tourists are thus a very important target audience for the city. Through campaigns and strategic communication actions, we proactively encourage conference delegates to stay an extra day or two, or to book a return visit to the city.’

The country hosts about 1 million business visitors annually, sustaining more than 250 000 jobs. Meetings, incentives, conferences and Exhibitions (MICE) events have become a national priority. The majority of tourists – more than 95% – come for a relaxing holiday, compared to the mere 2% to 3% who come for professional reasons. But those few business-minded visitors offer disproportionate value to local businesses.

They’re worth the effort: although business people make up a small proportion of total visitors, business travel spending is high. According to Brand South Africa, business tourists ‘spend on average three times more than their leisure counterparts, while crossing over significantly into leisure travel themselves, through tours before or after their business activities and through return trips in subsequent years’.

Frequently, the business trip is a gateway to experiencing a part of the world that foreign professionals would not otherwise have encountered. As Yugashnee Naicker, group sales manager at the Peermont Group, explains, ‘first-time visitors to South Africa are often people on business, who would otherwise not think of visiting a country so far to the south of the continent, and one, unfortunately, often covered by bad press. In gaining first-hand experience of the country, however, business travellers often have their preconceived notions about the country strongly challenged, and major investment decisions can be made based on a single visit – whether that investment is in a major job-creating project or in a family holiday’. 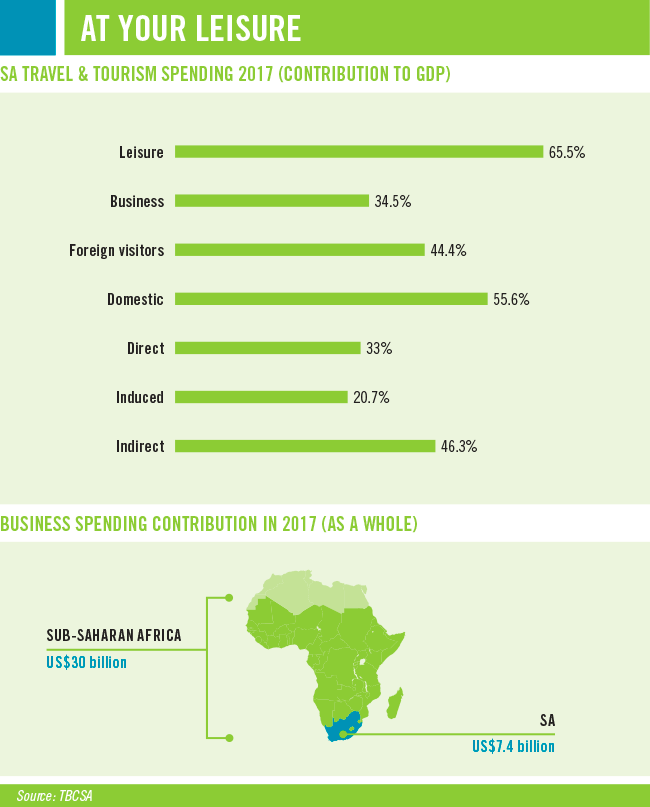 According to SA Deputy Minister of Tourism, Elizabeth Thabethe, ‘delegates have an appetite to experience South Africa’s leisure attractions, and most have the disposable income to enjoy an extended holiday add-on to their business trip’. Thabethe emphasises that SA is ‘open for business and on an accelerated drive to increase our share of the global business events pie’. Indeed, SA hosted 200 international conferences between 2014 and 2019, attracting around 300 000 delegates and bringing in more than R1.6 billion.

Even these impressive figures may be underreported. Martin Jansen van Vuuren, director of tourism at Grant Thornton, says: ‘When someone arrives in South Africa, Customs will ask if they are a leisure or business traveller. The majority of business tourists would say they’re leisure arrivals because they’re worried about having to obtain a special visa, so the numbers are likely to be quite a bit higher than official figures indicate.’

However, this enticing business sector is not without its challenges. A decade ago, SA planned to grow tourism by allowing travellers to move more freely and efficiently. E-visas, regional visa schemes, and visa waiver programmes between key source markets were all mooted.

However, new visa regulations were issued in May 2014, when the Department of Home Affairs gazetted two significant changes: a requirement that all travellers under the age of 18 possess an unabridged birth certificate, a passport and a visa if necessary; and that tourists apply in person for a biometric visa, if required. Subsequently, tourist numbers have plummeted. According to Stats SA, for example, Indian tourist arrivals to SA were down 12% in the year from May 2017.

The impact on visitors from China – one of the country’s most significant tourism markets – is particularly worrying. For example, Stats SA reported that the number of Chinese visitors dropped by a third in the year after the new visa regulations kicked in. Another constraint is limited direct flights between China and SA. This is widely recognised as a major brake on the tourism industry. According to the Tourism Business Council of South Africa, these regulations prevent more than 10 000 visitors entering the country yearly, with resultant revenue losses of millions of rands. As Phakisi says, ‘to unlock the potential of tourism to stimulate our economy, all we have to do is take our thumb off the administrative pipeline that chokes the industry’.

A promising development is the statement on the country’s Economic Stimulus and Recovery Plan by President Cyril Ramaphosa in September 2018, highlighting visa changes approved by Cabinet: these ease restrictions on minors travelling, the list of countries requiring visas, and visa requirements for skilled foreigners. An e-visa pilot programme is also in the works. ‘These measures have the potential to boost tourism and make business travel a lot more conducive. Tourism continues to be a great job creator and through these measures we are confident that many more tourists will visit South Africa,’ he said. Minister of Tourism Derek Hanekom agrees. ‘The visa issue should have been addressed a long time ago,’ he says in an IOL report.

‘Things are never quite as fast as one would like them to be, but things are happening very fast at the moment, adding that he had been working closely with the Department of Home Affairs to ensure visas and visa requirements do not stand in the way of visitors to SA.

If all goes well, the changes will help unlock the potential of SA as a conference destination – one where the keynote address is packaged with a safari, or a sunset cocktail on the beach.