It’s a colossal feat listing a business on the JSE. It is an even greater feat when you are able to produce a great set of results at the end of your first year on top of purchasing a new asset to the value of R250 million, while making moves to acquire another large entity in the fishing industry. Leading, vertically integrated FMCG enterprise, Sea Harvest Group (SHG), has done just that.

Sea Harvest is one of the largest black-owned fishing companies in the SA fishing industry and its principal business is the fishing of Marine Stewardship Council (MSC)-certified Cape hake and Shark Bay tiger and king prawns; processing the catch into frozen and chilled seafood; and marketing the products locally and internationally.

The group recently reported its first set of full-year results since listing on the JSE in March 2017, with revenues of R2.13 billion, up 10% from 2016 due to the continued strong global demand for high-value, sustainably certified wild-caught seafood, with limited supply driving strong pricing across all channels and markets. 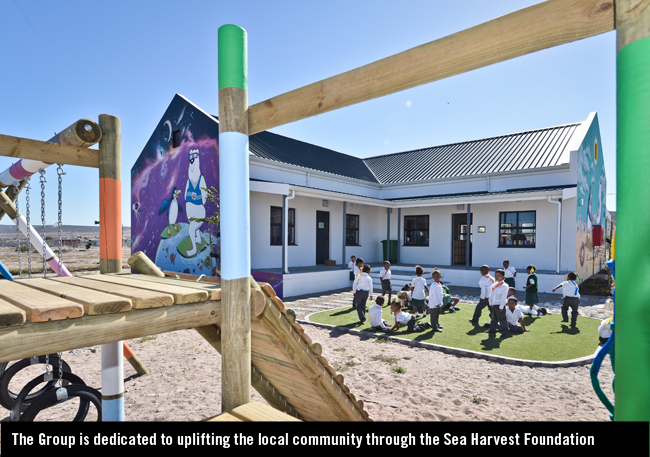 ‘Sea Harvest is not a commodity business. We have premium seafood offerings in both South Africa and Australia with strong consumer loyalty and brand equity, particularly in South Africa, while our marketing footprint covers more than 20 countries around the world,’ he says. ‘Prior to our listing, we focused on optimising our fresh fish and added-value operations, which allowed us to improve efficiencies in our production facilities.’

However, the group has not focused on creating value just for its shareholders – it also visibly demonstrates its commitment to transformation within its own structures, along with the greater fishing industry and local community.

In addition to its black ownership of 80%, the group has been dedicated to actively contributing towards transforming its local community through the recently registered NPC, the Sea Harvest Foundation; and continuing to support its enterprise and black supplier development initiatives.

In February 2018, it opened a Grade R school in Diazville, Saldanha Bay – a project established in 2015 in partnership with the Western Cape Education Department.

‘It was a proud moment, cutting the ribbon at the opening with our board chairman, Fred Robertson, and seeing the faces of the children who will benefit from the investment in their early childhood development, which we know has a significant impact on the emotional, physical and mental health in the later years of an individual’s life,’ says Ratheb.

Meanwhile, by partnering with black businesses and, in many cases, being instrumental in the formation of some, Sea Harvest has been able to play a big role in bringing new entrants into the mainstream economy.

‘As democracy was being birthed in our country, Sea Harvest was already looking at supporting the creation and development of new black-owned fishing companies,’ says Ratheb. ‘One such entity was Vuna Fishing Company (Pty) Ltd (Vuna), which in 1996 had a hake deep-sea quota but no access to a vessel. We sold one of our vessels to Vuna at below market value and entered into a supply agreement, while also supplying it with fuel on very favourable terms. Over the years, we’ve given support to Vuna, which is majority owned by investment company, Phambili Vuna Investments.’ 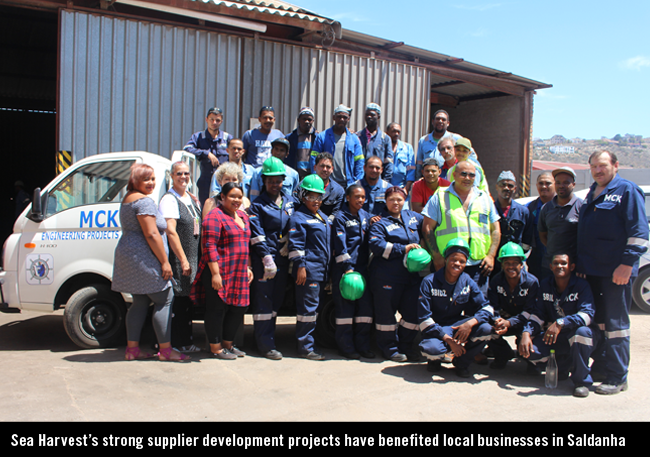 The company is now a fully fledged fishing business with six vessels, and a factory of its own, which employs more than 500 people in Mossel Bay.

Sea Harvest will look to replicate this successful model and assist other small black fishing companies in becoming sustainable, well-run entities that employ and create opportunities for the previously disadvantaged.

‘As Sea Harvest, we continue to play an integral role in the rural economic development of Saldanha. Our company – along with other corporates based on the west coast – established the West Coast Business Development Centre over 20 years ago.

‘The centre offers technical skills training and mentoring support to assist entrepreneurs and, in 2017, assisted over 4 000 entrepreneurs to fulfil their ambitions and create thriving businesses,’ says Ratheb.

To complement its enterprise development approach, Sea Harvest has also implemented strong supplier development projects that have yielded advantageous results for local black suppliers. ‘Saldanha business owner Suleiman Adjiet is one such supplier,’ says Ratheb. ‘He has grown his transport company from just one taxi in 1998 to 20 taxis and 12 cold-storage freezer trucks, largely thanks to Sea Harvest’s procurement policies, which prioritise investing in local black suppliers.

‘Sea Harvest’s sea-going staff are transported to and from work by Adjiet’s taxi business, which started with one driver. In 2004, he had sufficient capital to diversify and start another company, SHR Transport. He bought a cold-storage truck and started pitching for contracts to deliver Sea Harvest’s frozen hake to Cape Town,’ says Ratheb.

‘Today he is responsible for transporting our frozen hake across the country.’ This, adds Ratheb, is the new normal.

‘A business cannot be in business to only create opportunities for itself. There is suffering and wrongs that need to be righted, and Sea Harvest acknowledges the responsibility, beyond regulatory requirements, for business to positively impact the communities in and around which it operates.

‘Our aim is to make a difference by sharing our growth through, for example, local area, enterprise and black supplier development.’