Early in the year 2000, as a young professional starting her SAICA articles, Zimkita Mabindla had an interesting conversation with an auditing partner. He advised that when conducting an audit, one should focus not only on the tangible aspects of the business – namely the figures – but also on the intangible aspects. This means ascertaining the kind of corporate culture that produces the results and paying attention to the type of environment the finance function operates under.

The audit partner cautioned against blindly following the audit programme from previous years. ‘Be vigilant and pay attention, then you will be able to apply the right level of professional scepticism,’ he said. This remains one of the most memorable conversations Mabindla has had in her career.

Mabindla says she was reminded of his advice especially in light of the recent controversies surrounding SA corporates. ‘As the stories unfolded, I found myself asking the following questions with regard to these corporates: are there domineering personalities in powerful leadership positions? Is the corporate environment conducive to dissenting opinions and accountability? Is the environment dominated by fear? What are the key drivers of the people within the finance function? What behaviours are being incentivised?’

The audit partner also said that corporates who encourage domineering personalities in leadership positions run the risk of management overriding internal controls. With regard to fear, he added that employees in these corporates generally hide rather than account for their mistakes. This increased the risk of hiding errors, and these errors are sometimes reflected in the numbers being audited. This environment also compromises the quality of explanations and audit evidence presented to support the numbers.

With this in mind and the ethical dilemmas facing the accounting profession, Mabindla addresses two questions. First, what more can be done to tighten corporate governance regulations and structures? Second, are stronger laws needed for corporates?

TIGHTENING REGULATIONS AND STRUCTURES
When it comes to corporate governance, the principles of the King Report on governance are well-respected. For example, in February 2010, the report’s 2009 version (the King III Code) was incorporated into the JSE listing requirements. Then, in May 2017, the JSE updated its listing requirements and made the King IV Code mandatory, according to Mabindla.

‘I believe that, as listed entities, the organisations and individuals implicated in the recent accounting scandals and ethical dilemmas would have already been complying with the corporate governance principles,’ she says. ‘But, what are some of the principles that inform corporate governance for listed South African entities? How are these principles viewed locally and internationally?’

The current Code and its previous versions have been explicit about ethical governance, ethical leadership and ethical culture. King III, for instance, emphasised the fundamental principle of a ‘sound ethical culture’. The message could not be clearer; the ethical culture of any organisation should be driven by the ‘tone from the top’. This means the board is responsible for ensuring that an ethical tone permeates throughout the organisations they oversee and govern. Remember, that for corporate governance principles to thrive and be effective, an ethical corporate culture must exist, says Mabindla.

In addition to an effective ethical culture, the King Code, even under King III, also discussed the principle of a ‘combined assurance model’. This concept incorporates and optimises all assurance services and functions. When taken as a whole, these services enable an effective control environment, support the integrity of information used for decision-making by management, the governing body and its committees; and support the integrity of the organisation’s external reports.

If any of the affected organisations and individuals had applied the aforementioned model, an effective control environment would have been enabled. The integrity of information used for decision-making by management, the governing body and its committees, and the integrity of these organisations’ external reports would be supported by effective processes, advises Mabindla.

For an effective control environment to thrive, there must be an ethical culture. It also cannot thrive in organisations where management overrides internal controls or where dissenting opinions are silenced or there is fear. In addition, an effective control environment will not apply in a corporate where achieving profits at all cost is incentivised. 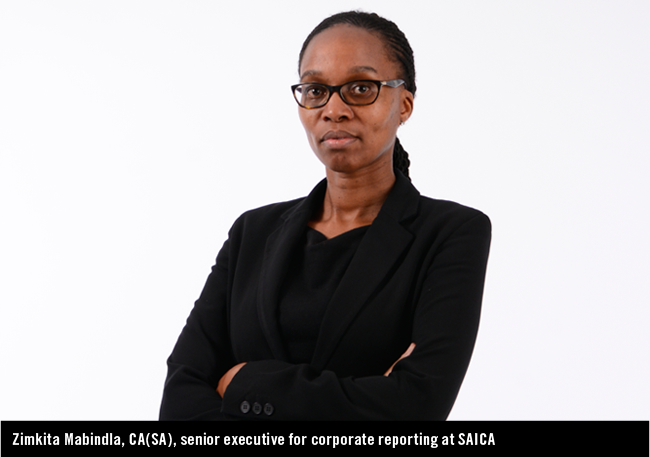 STRONGER LAWS FOR CORPORATES
According to Mabindla, the King Code is not the only tool listed companies have to adhere to. They must comply with the International Financial Reporting Standards. Another set of standards used by auditors to inform their auditing procedures and methodologies is the International Standards of Auditing. These codes for the accountancy and auditing professions conform to those released by the International Ethics Standards Board. The organisations also have to comply with the Companies’ Act of South Africa. The King Code, in turn, also recognises integrated reporting as a key principle of corporate governance. Most listed entities compile their integrated reports using internationally recognised frameworks.

‘I have argued that there are sufficient regulations to produce ethical organisations that produce effective corporate governance. I believe that applied correctly and with good intentions, these regulations would have yielded credible results. This would have been true in the organisations involved in recent controversies, says Mabindla. ‘It is also safe to assume that most South African organisations do apply these regulations appropriately and with good intentions. If they did not, our financial markets would be in total chaos.’ Mabindla adds that in light of the recent scandals, it is appropriate to ask: should we add to existing laws and tighten corporate laws? Do we need stronger laws for corporates? ‘I would argue that we do not need more corporate laws. It seems to be a pattern in the wake of accounting scandals that we tighten regulations. For example, after the collapse of Enron in 2000, we increased regulations, material updates and interpretations to financial reporting.’

This, however, did not stop the 2008 financial crisis from happening. To respond to the crisis, significant changes, updates and replacement of accounting standards were introduced. These did not prevent the recent accounting scandals in SA.

Mabindla argues that before we tighten regulations again, we need to ask critical questions about the corporate cultures and environments that underlie and inform these reported scandals. Is there a trend we can infer? Were cultures in these companies conducive for regulation to thrive and to be applied appropriately and with good intentions? What type of behaviour was incentivised? What values and ethics drove the individuals and organisations involved? Was the underlying corporate culture ethical? Were the governance structures aware of the cultures that informed the numbers reported to them? Did these governance structures ask the right questions? Asking these questions could point us to the elephant in the room – ethical corporate behaviour.

It has been 18 years since Mabindla had the conversation with the auditing partner, but his advice still resonates with her. ‘He was right. An ethical culture is vital to effective corporate governance. Instead of tightening regulations, we need to tighten our principles around the corporate cultures and behaviours we tolerate, incentivise or turn a blind eye to,’ she says. ‘This might help us avoid another scandal. We might not need more regulations. We need to create corporate environments that reward good ethical behaviour.’