It has a diverse investment portfolio that includes landmark commercial and retail property investments and developments in SA, sub-Saharan Africa and Europe. Attacq’s blended investments in established and developing markets minimise risk, especially in pressured times.

Founded in 2005, the company acquired the Waterfall development rights in 2008 and listed on the JSE in 2013. Waterfall is Attacq’s prime mixed-use development with retail, hotel, corporate and industrial developments located north of Johannesburg. The jewel in the crown is Waterfall City, SA’s newest corporate headquarters destination in a sustainable urban environment, with the iconic Mall of Africa as the retail catalyst of the ‘work, live, play’ city.

Attacq takes pride in doing business in a socially and environmentally responsible manner, with a focus on long-term relationships and mutually beneficial strategic partnerships.

‘Property is a long-term asset. Attacq’s strategy is based on long-term sustainable capital growth with a long-term view similar to the asset class we invest in. Attacq will continue to invest, develop and grow wisely as a sound listed capital growth fund with a strong investment and development pipeline,’ says Morné Wilken, CEO of Attacq.

‘We will continue to pursue good business opportunities in South Africa, developing markets as well as established markets.’ 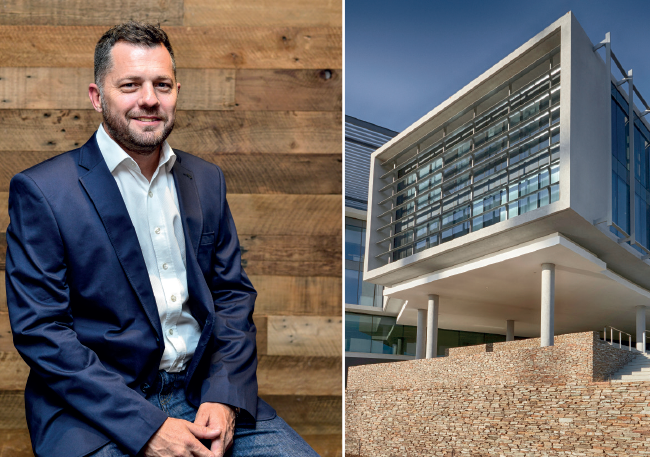 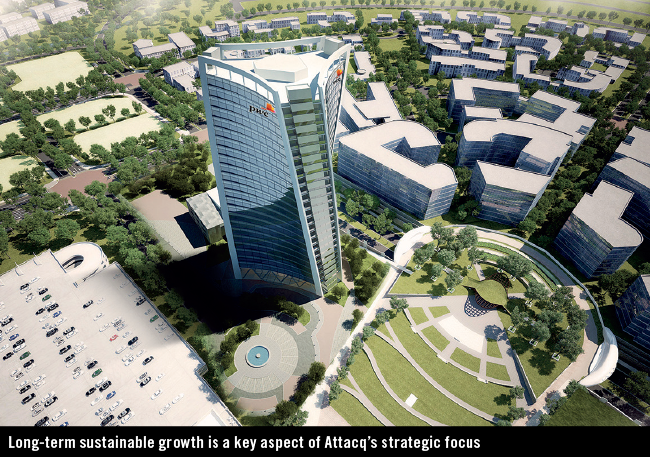 The company focuses on sustainable capital appreciation through the development and ownership of a balanced portfolio of properties with contractual income streams.

Capital appreciation is supplemented by development and redevelopment profits. The group benefits from ongoing diversification into developed markets and its diverse investment portfolio includes landmark commercial and retail property investments and developments.

Attacq is heavily invested in SA and specifically in Waterfall, which is the crown jewel in the development portfolio. This introduces great opportunity, but also concentrates risk. By diversifying investments within SA, as well as globally, Attacq mitigates these risks, positioning the group to capture opportunities as they arise.

In SA, Waterfall continues to be one of the most attractive development pipelines, given its sheer size and excellent location. The opening of the Mall of Africa in April 2016 represented the start of a new chapter for Waterfall, and Attacq expects that it will act as a catalyst for the further development of Waterfall City and the Waterfall node.

Waterfall investment accounts for more than 40% of Attacq’s gross assets.

Located in Waterfall City, Mall of Africa is the largest single-phase mall development on the continent and a benchmark retail destination. The group holds a total asset value of more than R27.6 billion, with R5.9 billion of this value held in international market investments. Attacq also has a market cap of more than R15 billion.

According to Wilken, the 133 000 m2 mall – the largest single-phase shopping mall in Africa – had a strong launch, with more than 123 000 visitors on opening day and an impressive visitor flow since, exceeding expectations.

‘More than 1.1 million people visit the mall every month,’ he says. ‘The scale of the Mall of Africa brings significant shoppers’ choice acting as a drawcard, which makes it attractive for leading local and international retail brands to secure retail space in the mall. The size caters for significant footfall, thus making it attractive for tenants. The development was done based on very sound demographic study, investigation and forecast of an acceptable yield.’

The Mall of Africa has created more than 4 500 jobs and employed around 7 500 people during its construction. A further 25 000 m2 is planned for the first expansion, with more than 300 retail outlets already involved. Given the security concerns surrounding the country’s urban areas, many choose to visit malls such as the Mall of Africa to relax and enjoy themselves, as well as to shop.

The super-regional Mall of Africa is intended to address this problem for Gauteng and the surrounding area, where more than 100 000 households are still short of retail access.

Attacq’s shopping centres have been profitable for the company, showing an average 17% return on investment in 2016 on the R5 billion facility. In SA, building and operating shopping centres has proven to be good business for several years now, with something of a boom taking place.

Waterfall and its CBD, Waterfall City, are being developed as Gauteng’s newest lifestyle city. The interest and uptake is already very promising. Bluechip tenants recognise that Waterfall is a premium destination and the demographics stack up – it’s an exciting area to invest in.

‘We have had several international corporate brands like PwC, Novartis, Group 5, Cell C and Premier Foods that have consolidated in Waterfall City,’ says Wilken. This new CBD has been developed as an urban space where people can enjoy a balanced lifestyle in a pleasant urban development setting that takes both people’s needs and that of the environment into account.

Conveniently located on the N1 highway between Pretoria and Johannesburg, Waterfall is a superior mixed-use city that includes retail, commercial, light industrial and residential properties.

Attacq is testing business cases for sustainable technologies across waste, water, carbon and energy, as well as piloting behaviour change programmes with tenants. Energy and water ratings of all our buildings is an ongoing process as these are not only good practice in transparency, but also shed light on where we can improve most efficiently. Several buildings currently under construction at Waterfall will apply for an official Leadership in Energy and Environmental Design certification – a standard originally from the US Green Building Council, which recognises best-in-class building strategies and practices.

The decision to invest outside of SA was taken in a bid to diversify Attacq’s portfolio, create a currency hedge and take advantage of the growth opportunities in foreign markets while capitalising on the stability of developed markets.

Wilken is proud of the international expansion progress. ‘We have invested in Europe with a strategic investment in MAS Plc – a company listed on both the JSE and Luxemburg, two retail centres in Cyprus and a portfolio of retail properties in Serbia. We have also invested in Africa – predominately in retail centres joint ventures in Ghana, Zambia and Nigeria. The investments are paying off and account for around 24% of our gross assets and almost 40% of our net equity.’

Attacq owns a stake in AttAfrica via its wholly-owned subsidiary AIH International Ltd. AttAfrica offers the group the opportunity to be involved with developments on the continent. AttAfrica is a property investment company focused on investing, developing and acquiring A-grade shopping centres in key sub-Saharan African markets, excluding SA. This investment remains a vital part of Attacq’s geographic diversification strategy.

Attacq’s environmental strategy has a dual focus and includes reviewing all new buildings coming on-line, as well as the existing property portfolio. Attacq’s adopted urban design principles for all its developments at Waterfall to guide the development of new buildings in line with international best practice. Many buildings in Waterfall City are sterling examples of environmentally sensitive design and build projects.

Attacq prides itself on living its core values and being a responsible corporate citizen that invests for the greater good of society. Looking far beyond its own bottom line, it participates in, develops and invests in the growth of people, both internally and externally. The firm has formed a partnership with LaunchLab, an incubator entrepreneur-training company, to promote business investment and innovation in the retail sector.

‘We want to look at potential initiatives in the retail space,’ says Wilken. ‘We give participating entrepreneurs seed money to look at opportunities, and when an opportunity is feasible and we want to roll it out, we as Attacq can participate.

‘It is an opportunity for people to practice entrepreneurial spirit and it gives us a potential business opportunity in the future.’