Mary Vilakazi CA(SA) is a rare example of a non-executive director being invited to move to the other side of the board table and play an executive role. She was a partner in the financial services practice at PwC from 2005 until 2008, where she worked on the audit of Metropolitan Life, one of the top financial services providers in SA, and left to gain broader experience but also to achieve a fairer work/life balance, she says. Though she had long planned to move on, ‘I had so much fun with the Metropolitan people I was reluctant to leave’.

Vilakazi thereafter served as a non-executive on the board of Metropolitan in 2009, making a contribution to various committees including audit and actuarial committees, and where one of the first decisions she had a say in was to approve its merger with Momentum to form MMI. In May 2014, she was persuaded to become an executive at MMI.

She attributes her success to having had ‘opportunities to excel and the best training during articles’. She qualified as a CA(SA) in 2002, having studied for a BCom at Wits University, and subsequently trained and managed at PwC. The fact that her peers from that group are to be found today throughout business, she says, ‘is a sign of what a good training ground PwC was’.

When she was promoted to partner in 2008, at the age of 27, Vilakazi was one of the youngest PwC partners worldwide.

After leaving PwC in 2008, she took the position of CFO of the Mineral Services Group (MSG) – an entrepreneurial group of geologists. However, the timing – just before the global financial crisis and end of the long commodity boom cycle – was not fortuitous.

‘Commodities were hard hit, and this gave me a bird’s eye view of the challenges of entrepreneurism, when the buck stops with you,’ she says. Vilakazi adds, though, that she particularly enjoyed being the managing trustee of MSG’s social responsibility arm, the Zenzele Development Trust, and remains a trustee to this day.

During this consulting phase, Vilakazi was in demand as a non-executive director, not just at Metropolitan but at Kagiso Media, Holdsport and the Development Bank of Southern Africa too. In addition, she chaired MSG’s remote exploration and drilling services, and she was also an adviser to the Financial Services Board on long-term insurance. 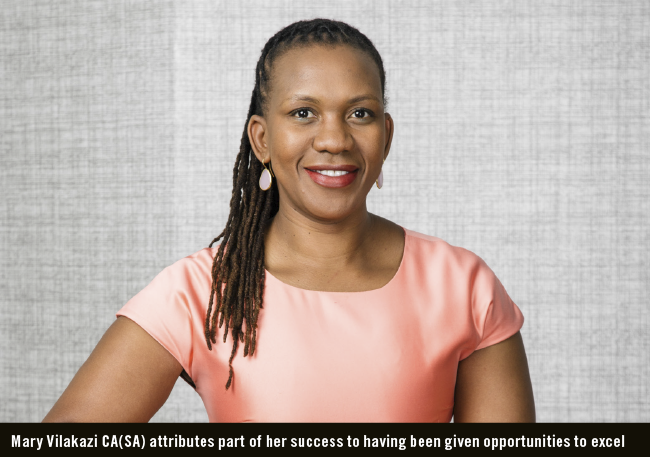 She was persuaded back into the business fast lane in May 2014 – and returned from Cape Town where she’d been based for the previous 10 years – taking the job of head of balance sheet management at MMI in Centurion, before becoming group finance director in September. While Vilakazi was originally recruited for her technical expertise, her management skills prompted her promotion.

Reporting indirectly to her are 400 to 450 people via her direct management team of nine employees, representing group finance, balance sheet management, corporate finance and tax.

Vilakazi works with the kind of smart people she enjoys. Though just because they’re bright, that doesn’t make the job easy, she says. ‘These are forthright people with their own minds – specialists and high-IQ people who like to get on with their jobs and not be interfered with. However, even high-IQ people can have low EQs, and it requires proper engagement while avoiding micromanaging.’

Such a team lends itself to a consultative rather than autocratic management style, she explains, but the reorganisation required within the finance division necessitated considerable restructuring within the team, and she was able to effectively construct a new, stronger team that combines experience and youthful enthusiasm.

‘What makes problem-solving more effective and interesting, I find, is diversity within a team, whether in terms of discipline, gender or race,’ she says. ‘Such people each think a bit differently. For instance, increasingly in financial services we need more people from the humanities discipline because often there is no wrong or right to a situation, but rather having as well-rounded a solution as possible.’

Vilakazi assumes full responsibility for taking the tough decisions in the team. ‘I never previously fully appreciated the importance of this factor until observing in other organisations what happens when leaders fail to make tough decisions,’ she says.

‘As a result, I do not shy away from such decisions or having difficult conversations with people when it is called for, though I always aim to do so with respect. A big part of my role is working with people, and fortunately I have long enjoyed studying and trying to understand human behaviour – so working with others to enable them to make their best contribution comes naturally to me.’

Vilakazi has a multifaceted role on the exco – as head of her department, a member of exco, a woman and as a citizen.

‘My responsibility is not just to my team but to my fellow executives where I have the dual role of ensuring the group financially maximises its financial resources and opportunities and delivers on its promise to shareholders,’ she says. As one of only two female executives on the MMI exco, she subtly influences issues around transformation – with regard to both race and gender. ‘I also play a role in MMI’s corporate citizenship, supporting the business to ensure we’re doing the right thing as an organisation, and ensuring the resources are available for corporate social investment.’

Vilakazi’s close involvement in these corporate values stems from her own sense of commitment, having been a recipient of ‘goodwill’ through scholarship programmes for school and university.

‘A big part of my personal motivation is to reciprocate those benefits and “pay it forward”. I’ve always been involved in various foundations such as Thuthuka [of which Vilakazi is a trustee] and several others. I’m passionate as a South African – we have a great country that has a tremendous need for greater leadership – I was given opportunities and want to ensure others get the same,’ she says.

As one of the very few black female executives in the life insurance industry, she is cognizant of her position as a role model while not consciously projecting it.

‘I try to just be myself; it’s not forced,’ she says. For this reason, she rates authenticity as possibly the highest value. ‘I believe that the attribute that people appreciate the most about me is my consistency.’ This also means she is in heavy demand as a mentor, something to which she lays down conditionality to avoid being swamped.

‘I’m particular about people [with whom] I do formal mentorship. I have to be sufficiently interested in them and their career – it must be someone I can recognise talent in that I feel I can unleash,’ she says. ‘When these conditions are met, mentoring provides small moments that can make an impact towards creating a future star.’