While best known as a world-class tourism destination, Cape Town is increasingly being identified by businesses as a forward-looking, globally competitive city ready for investment. The city is already home to the African headquarters of major multinationals including Amazon, DHL and KimberlyClark, while homegrown global titans such as Naspers, Shoprite and Woolworths use Cape Town as a base to expand across the continent and beyond.

An impressive group of asset management firms and more than 200 companies in the IT and software industries create a dynamic ecosystem. More companies are choosing Cape Town because the city boasts world-class infrastructure, sound governance, and four top African universities – providing a skilled workforce.

What sets it apart is the City of Cape Town’s commitment to create an enabling environment for business to invest and grow.

The Invest Cape Town initiative demonstrates the City’s desire to create a platform that will encourage business leaders and entrepreneurs to live, work, play and invest. Invest Cape Town works with international and local entrepreneurs, SMEs and multinationals that wish to set up a business in Cape Town. On the ground, the City’s enterprise and investment department collaborates with partners from business formations, investment promotion agencies and sector support entities, as well as all spheres of government to encourage economic growth and investment. 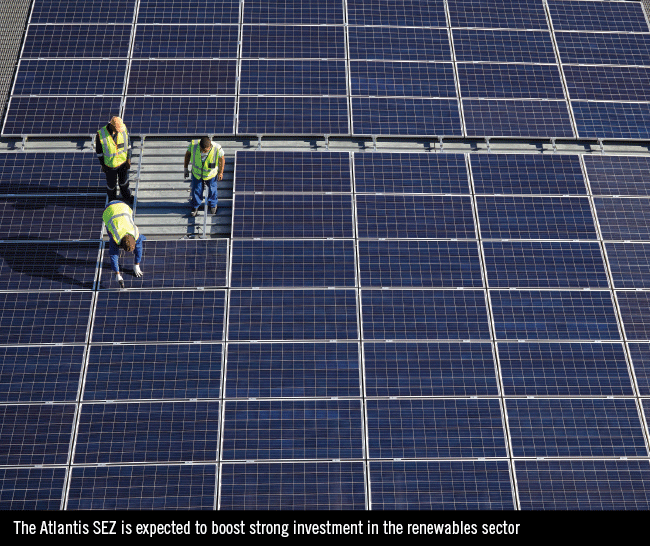 Lance Greyling, the City’s director of enterprise and investment, says: ‘Cape Town is an excellent location from which businesses can launch their operations into the rest of Africa and we are ready to help you build your business case for investment.’ Invest Cape Town offers:

In September 2018 the World Bank Ease of Doing Business report found Cape Town to be the best of all SA cities in getting electricity to investors and granting construction permits. The city’s top ranking in terms of providing electricity puts Cape Town in the top 25% of city economies worldwide.

Infrastructure
Cape Town invests R6 billion in infrastructure each financial year, and is establishing energy security by switching to renewable energy as 20% of its energy source by 2020. Cape Town is also investing in IT infrastructure; to date it has installed approximately 1000 km of fibre-optic cable.

Growing sectors
‘There are a number of interesting sectors that have emerged in Cape Town that investors will be particularly interested in,’ says Greyling. ‘A lot of the sectors Cape Town is doing well in are sectors that are poised for big global growth – sectors of the future. An example is the ICT sector. We are very much the tech hub of Africa with the most tech start-ups of any city on the continent, and we also have a mature ecosystem here that can support tech companies.’

In October, Amazon announced its investment in building three data centres in Cape Town. Greyling says City officials worked closely with Amazon for more than two years to facilitate this investment and ‘we are very proud to be the location for expansion by one of the world’s leading tech giants’.

Cape Town’s entrepreneurial tech sector is significantly more productive than other African cities, employing more than double the number of people than Lagos and Nairobi combined, according to a 2018 study by Endeavor Insight. Up to 550 entrepreneurial companies in the city employ between 40 000 and 50 000 people.

In terms of business process outsourcing (BPO), Cape Town is the leader in SA and the continent. It has a rich talent pool with a predominantly English-speaking workforce that is able to engage with international clients. In addition, it is in the same time zone as Europe; and the cost of doing business is relatively low.

The City is funding special purpose vehicles to act as catalysts in key growth sectors. In the past financial year, more than 2 700 Capetonians received training in the BPO, ICT, fashion, garment-making and renewable energy sectors, creating a steady pipeline for a skilled labour force.

Christopher Bredholt, Moody’s vice-president, senior analyst and the report’s author, writes: ‘The South African renewable energy market has grown rapidly over the last five years or so, and there is rising demand for renewables debt.’

The Atlantis GreenTech special economic zone (SEZ) presents a particular opportunity in this regard. President Cyril Ramaphosa officially opened the SEZ in December 2018. It has so far already attracted R680 million in investment, creating 312 jobs.

The zone is also forecast to attract R3.7 billion in investment by manufacturers of wind-turbine blades, smart meters, batteries, wind turbines, solar water heaters and solar PV as well as by other players in the waste, agri-processing, water tech, gas and chemicals value chains. Nearly 3 000 jobs are expected to be created by 2030 if these investments are realised. With the progress made on the Renewable Energy Independent Power Producer Procurement programme and the small-scale embedded-generation market expected to be worth R7.5 billion by 2035, significant opportunity exists for solar panel-manufacturing activities and related spin-off industries in the Atlantis SEZ.

In addition, there is a need for thermal treatment technologies for dirty mixed plastics, refuse-derived fuels and thermoform PET.

Lastly, it is now easier to reach Cape Town than ever before. Over the past three years, Cape Town Air Access has secured 13 new routes and helped expand 18 existing routes to the rest of Africa, Asia and Europe. During this period, more than 750 000 inbound seats were added.