How exactly do the Big Three agencies calculate their ratings?

The narrative of rating agencies holding the sceptre of power over companies and states like kings of yore is newsworthy gravy for media institutions. Before COVID-19 annexed every centimetre of headline space, the latest downgrade warnings from Moody’s or one of the other agencies claimed prime attention. But apart from being in a position to quite literally rubbish a country’s financial reputation, what do these rating agencies do? And how do they do it?

In an eloquent bit of academic writing in a research paper on the industrial organisation analyses of the credit-rating industry, author LJ White explains that credit-rating agencies help lenders ‘pierce the fog of asymmetric information that surrounds lending relationships and help borrowers emerge from that same fog’. Meanwhile, the UNCTAD, in a paper on the potential impact of rating agencies on developing countries, notes that ‘ratings determine the eligibility of debt and other financial instruments for the portfolios of certain institutional investors due to national regulations that restrict investment in speculative-grade bonds’.

Rating agencies are grouped into the categories recognised and non-recognised, as decided by supervisors in the various jurisdictions. Moody’s, S&P Global (formerly Standard and Poor’s) and Fitch, for example, are recognised in most countries and, aptly known as the Big Three, control 95% of the credit ratings in the financial markets,  according to the Corporate Finance Institute. These agencies vary in size and scope of coverage, and so too in their methodologies and definitions of the default risk. Agencies use quantitative and qualitative assessments, which are reviewed and finalised by a rating committee. In the past decade or so, there has been an increased reliance on quantitative statistical models, based on publicly available data, notes UNCTAD, which has led to the assessment process being more mechanical.

Probability of default (PD) is a key measure in credit-risk models, but exposure is also determined by the expected timing of default, and by the recovery rate (RE) after a default has occurred. Therein the approach by agencies overlaps but can differ to some extent. 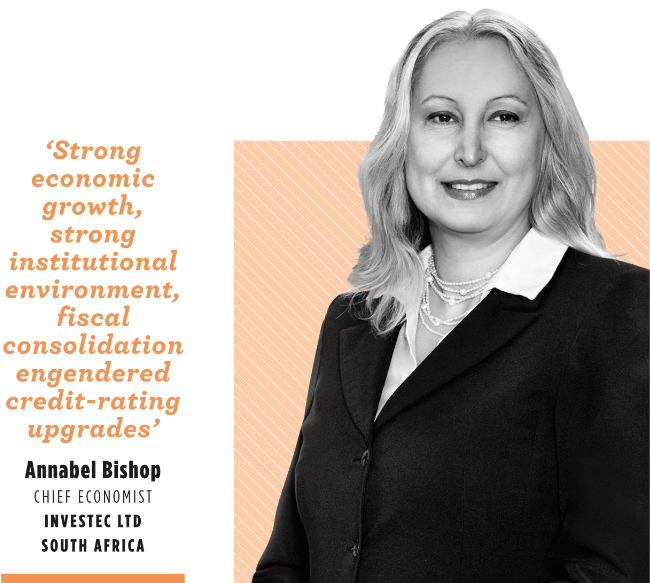 S&P, for example, captures the forward-looking probability of a default. Moody’s ratings, on the other hand, focus on the expected loss (EL), which is a function of both PD and the expected RE; thus, EL = PD (1- RE). Fitch’s ratings also focus on both PD and RE. Criteria vary according to the entity being assessed, whether it is a sovereign state, corporate structure or a financial instrument, as noted in the UNCTAD report.

Given the above, there remains ‘a large dose of judgement’ in the committees’ final ratings, according to UNCTAD. Credit-rating agencies will be the first to say their ratings constitute opinion and are not a recommendation to buy, sell or hold a security.

The agencies use different rating scales, but there is equivalence between the scales to facilitate comparison, as Krista Santos, debt advisory specialist at Rothschild, explains on the Association of Corporate Treasurers website. Such that a Baa1-rating from Moody’s is equivalent to a BBB+ rating from S&P, and BBB+ from Fitch.

‘Investors also use a broad categorisation of issuers as “investment grade” (Baa3/BBB-/BBB- and above) or “non-investment grade” (aka speculative grade, junk, high yield – being Ba1/BB+/BB+ and below),’ she writes.

Arthur Kamp, chief economist at Sanlam Investments, explains that the agencies use consistent rating methodologies that are quantitatively based, albeit with room for subjective judgement. ‘Their scorecards reflect the same factors bond investors look at in assessing the soundness of a country’s fiscal position.’ 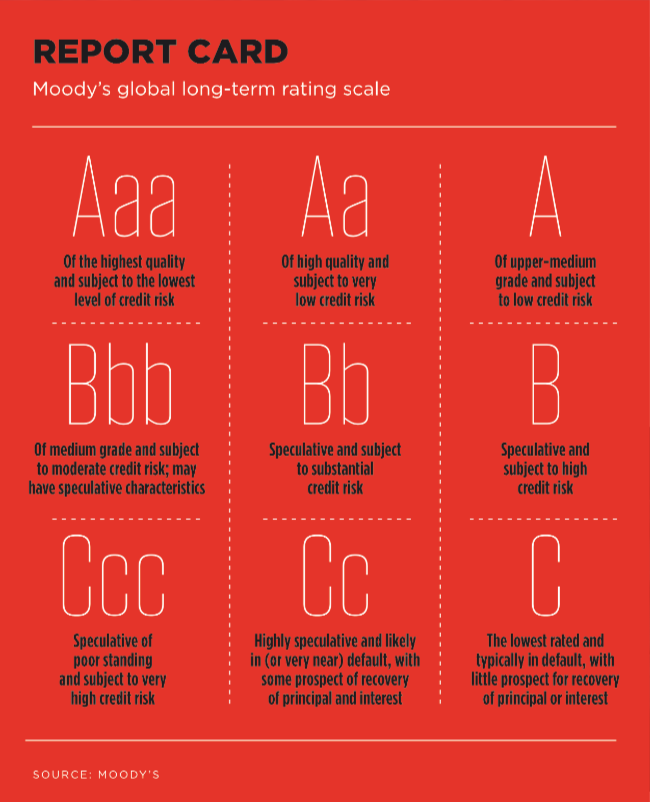 Markets often adjust interest rates higher and currencies weaker in advance of rating-agencies decisions, which, says Kamp, may reflect the expectation of the rating change itself. But he adds that, in the end, asset prices reflect market participants’ assessment of the underlying fundamentals of an economy.

It would be remiss to not mention SA’s long-term foreign and local currency debt ratings downgrade by Moody’s to Ba1 (sub-investment grade) in March. The rating agency explained that the downgrade reflects downside risks to economic growth and fiscal metrics, which could lead to an even more rapid and sizeable increase in the debt burden, further lowering debt affordability and potentially weakening SA’s access to funding.

When a country’s risk rating is moved from investment to sub-investment grade, it’s a big deal, as certain funds depend on the asset’s rating (bonds, for example) to be included in the fund. These mandated funds are obliged to sell their holdings of sub-investment-grade assets if these assets are no longer deemed worthy of investment, says Bishop. Depending on the size of the holdings of a company or country, it can have a significant impact on the company’s share price or country’s price of debt. However, it also depends very much on whether the financial markets are in risk-taking or risk-selling mode, which has a significant impact on asset prices.

So, how exactly are companies and countries impacted by the findings of rating agencies? One major repercussion is the cost of credit. Generally, a rating downgrade can be expected to increase the cost of credit and vice versa. ‘In recent years, South Africa’s sovereign debt ratings have been accompanied by a marked increase in real interest rates paid on government debt,’ says Kamp.

He explains that the debt issued by companies is benchmarked off government bonds. Companies usually issue debt at higher interest rates than governments, and the difference reflects the relatively higher risk of buying corporate debt since governments can raise tax revenue or even print money to service their debt, although the latter can lead to sharply higher inflation. Higher interest rates on government bonds increase the cost of credit for corporates, which impacts investment and job creation negatively.

If a country repairs its finances, says Bishop, the downgrade to sub-investment grade is not the death sentence we have come to believe, but the risks of not addressing the factors that led to the downgrade come with a heavy price tag. ‘Further credit-rating downgrades to SA’s sovereign debt, for example, would weaken and add to the volatility of financial market indicators, negatively impacting the growth and socio-economic outlook,’ she adds.

According to Kamp, the downgrade arrived at the height of financial market turbulence, which reflected the impact of economic lockdowns globally in response to COVID-19. ‘Hence, it is difficult to isolate the impact,’ he says. ‘Nonetheless, it seems fair to argue the anticipation of the downgrade in the period leading up to the downgrade contributed to falling financial asset prices in South Africa.’

As testament to market appetite and its influence, the sharp depreciation of the rand and the large-scale asset purchases by developed-economy central banks helped keep government risk-free interest rates extraordinarily low in those developed countries, says Kamp. A cheap rand and SA’s relatively high interest rates helped attract foreign buyers, and the rand stabilised by the first half of June 2020. ‘We should not aim to merely prevent further sovereign debt rating downgrades, but should rather seek to raise expectations that the next move in South Africa’s rating is likely to be back towards investment grade,’ he says.

‘The expectation of likely sovereign debt rating upgrades should, all else equal, lower the cost of capital even before the event.’