India and SA are conducting an ‘economic love affair’, says Abdullah Verachia, global strategist and executive director of the Centre for Leadership and Dialogue at the Gordon Institute of Business Science (GIBS).

‘I often say there are three great similarities between India and South Africa: the love for cricket, the love of Bollywood and the unique Gandhi-Mandela relationship. Those three drive the affinity between the countries.’

The close relationship is further driven by South Africans of Indian descent who play an active role among the country’s political, academic and business elite. The Indian diaspora accounts for about 3% (1.5 million people) of the SA population and 14% of local millionaires – a high proportion of wealth, especially compared to black Africans, who make up 76% of the population but only 10% of local SA millionaires, according to the 2015 New World Wealth report. Incidentally, the man known as ‘Africa’s youngest billionaire’ – Ashish Thakkar, the 37-year-old founder of the diversified pan-African Mara Group – also has Indian roots.

‘The long-term relationship and the diaspora have made South Africa a comfortable environment in which to do business for Indian firms,’ says Verachia in a co-authored book with Govin Reddy, titled India and South Africa: Trade and Investment Partners. ‘The dynamic development of the private sector in both nations over the past two decades has played a driving role in creating spaces for engagement that go beyond bilateral relationships, which cross borders into Africa and span a variety of diversified sectors.’

There are more than 160 Indian companies operating in SA across multiple sectors, which have created a truly significant number of jobs, he says. ‘As a consequence we’re seeing a new wave of more medium-sized companies and new sectors looking at South Africa.’

Rupees are flowing into healthcare and pharmaceuticals, education, mining, the automotive and agricultural sectors, as well as FMCG (where companies such as Godrej Consumer Products, Emami and Marico are scaling up).

This comes on top of the Indian financial services that already have a foothold here, such as the State Bank of India, the Bank of India, the Bank of Baroda, EXIM Bank and ICICI (Industrial Credit and Investment Corporation of India). Some of India’s largest IT companies have been using SA as a base for developing IT competence and deploying it across the continent, says Verachia. The first tier of IT giants investing here includes India’s ‘big five’ – TCS (Tata Consultancy Services), Infosys, Wipro (Western India Products Limited), HCL (Hindustan Computers Limited) and Cognizant.

The Indian influence is visible in everyday life, where brands such as Tata and Mahindra vehicles, ArcelorMittal steel and Cipla pharmaceuticals have become household names in SA. Furthermore, the JSE-listed Cipla (together with fellow Indian pharma brand Ranbaxy) has been instrumental in rolling out affordable antiretrovirals. And it’s a two-way street, as SA companies are also successfully establishing themselves in India. 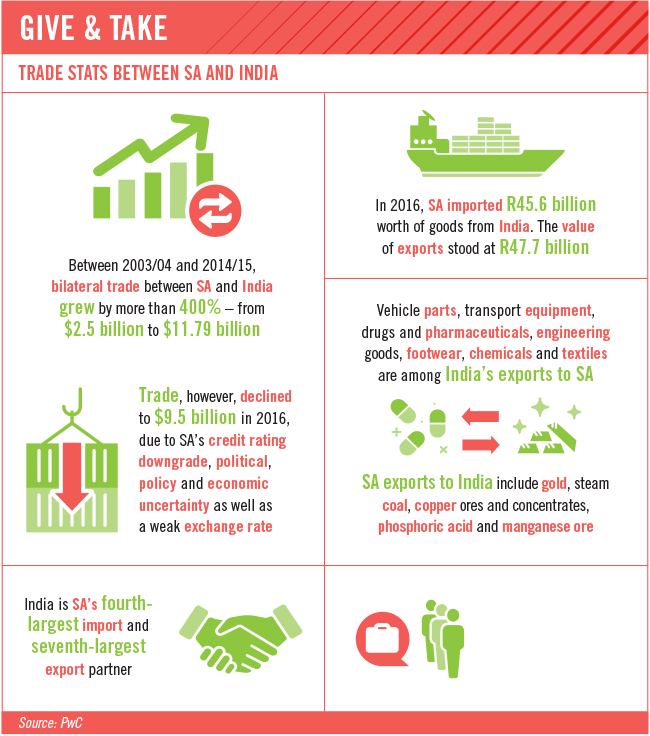 The first mover from the tip of Africa was FirstRand – which, according to Verachia, managed to build such an innovative and unique model of banking the unbanked in the slums of Dharavi, Mumbai, that it has now become a requirement of the Reserve Bank of India.

Other big SA corporates invested on the sub-continent include retail solutions firm Smollan, which works behind the scenes implementing in-store brand activations for high-profile clients and marketing them in the retail shop front. The group recently celebrated its Indian subsidiary winning the title of 2017 Power Brands Rising Star, with a spokesperson commenting: ‘Our Indian story is just at the cusp to leapfrog to a higher level.’

Meanwhile, Sanlam increased its stake in the Indian insurance company Shriram in 2016 and continues to offer its Sanlam India Opportunities Feeder Fund – a rand-denominated unit trust fund with a specific focus on Indian equities and companies that have their principal business activities in India. A number of private investors are already exploring the subcontinent as an offshore investment option for their money.

‘Looking forward, I believe there is an opportunity for South Africans to earn above-average returns by considering the merits of allocating exposure to India in their portfolios,’ writes Pragnesh Desai, CEO of Galileo Asset Managers, for Moneyweb. He lists the favourable GDP growth, strong stock market and rupee performance to make a case for India, as well as the nation’s inherent entrepreneurial spirit and its increasingly well-educated, aspirational and digitally connected population.

‘A word of caution is in order,’ he adds. ‘India is an emerging market with the inherent risks of oil price dependency, complex regulation, corporate governance weakness and relative market inefficiency compared to developed markets.’

If that sounds familiar, it’s because there are numerous parallels between BRICS members SA and India, although the latter is on an economic growth path (7.4% GDP growth in 2017) while SA is struggling at 1.5%. SA’s Public Enterprises Minister Pravin Gordhan said at the first SA-India Business Summit in May 2018 that the two countries needed to address inequalities between rich and poor within their own borders for meaningful development to take place.

India has already managed to nearly halve its poverty rate (from 55% to 28%) between 2005/06 and 20015/16, according to the Global Multidimensional Poverty Index. However, in terms of GDP per capita, SA is ahead, with $6 460 compared to India’s $2 130. Conservative estimates suggest that Indian private-sector investment in SA exceeds R50 billion and has created more than 18 000 local jobs, according to a 2018 PwC report on Indian industry’s inclusive SA footprint. 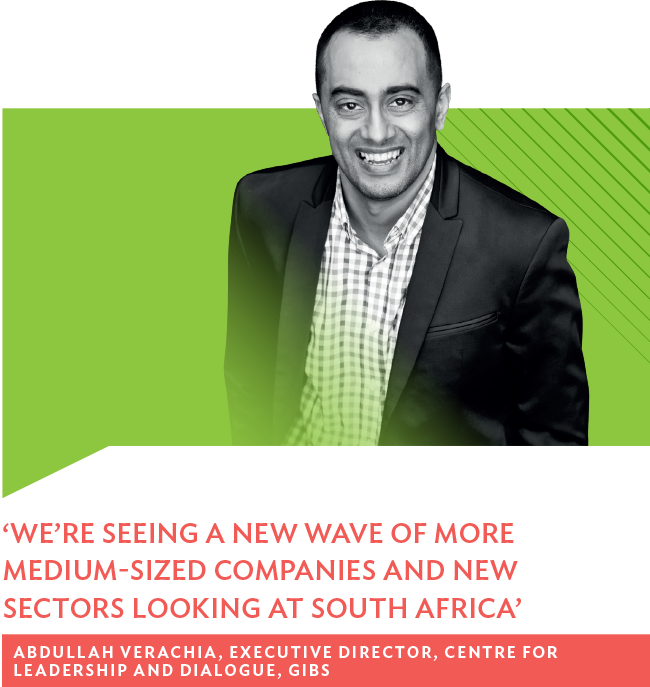 The SA government has been striving to reduce the dominance of commodities in its export basket. There’s, for example, the IBSA (India, Brazil and SA) Dialogue Forum to promote south-south co-opera-ation, which may help SA achieve a better trade balance and encourage investment. The trilateral initiative also facilitates the exchange of information, technologies and skills, and explores ways of co-operation in a range of areas, including agriculture, energy, defence, climate change and tourism.

Among BRICS partners, only China accounts for greater trade volumes with SA than India, says PwC. Both Asian nations are heavily invested in Africa’s mining commodities, but China’s trade is primarily state-orchestrated while India’s is driven by the private sector. Verachia calls India’s approach ‘more mindful and moderate’ than China’s, because it’s built on ‘fostering quality relationships over time’.

India’s presence in SA has boosted socio-economic development through the creation of decent jobs, skills transfer and the investment in local communities.

Indian IT companies are, for example, training South Africans in critical IT skills to increase the talent pool required for their local operations. And Indian banks such as Canara Bank are advancing transformation by investing in majority black-owned businesses. According to PwC, one of Canara’s notable investments is a large-scale solar-power project in the Northern Cape.

At the time of writing, excitement was building around Indian Premier League (IPL) cricket. ‘There’s a high probability that the IPL will come to South Africa in May 2019, when India will be in the grip of general elections,’ says cricket journalist Neil Manthorp, who is based in Cape Town and covers cricket around the world.

‘Just think of the economic spin-offs: the IPL comprises eight teams, each travelling with a big entourage, who all stay in luxury hotels and splash out in the host cities. Then there are the stadium crowds, who also spend a lot of money.’

Hosting a top sports event attracts additional income from stadium rental, ticket sales and broadcasting while promoting SA as an attractive destination. Above all, it strengthens the economic love affair between the two nations.