It wasn’t many years ago that a cruise holiday was, to put it kindly, less than fashionable. For decades, cruise lines have suffered the unfortunate reputation of appealing only to ‘the newlywed, overfed and nearly dead’. Shuffleboard at noon and afternoon bingo, before another call in a drizzly European port, was about all that was on offer.

Yet times have changed, and the cruise industry is booming. In its latest State of the Cruise Industry Outlook, the Cruise Lines International Association (CLIA), which calls itself the world’s largest cruise industry trade association, expects the number of passengers to top 27 million during 2018 – more than double the figure in 2009.

The growth is due to two, seemingly disparate, approaches. At one end of the scale the likes of Royal Caribbean, MSC Cruises and Norwegian Cruise Line are laying keels for ever-larger vessels, offering previously unimaginable facilities at sea.

Royal Caribbean’s Anthem of the Seas, for example, introduced the world’s first-ever skydiving simulator at sea, while outdoor climbing walls are becoming all but standard. Surf simulators and go-kart tracks have become almost pedestrian. Thrill-inducing water slides seem to be the next game-changer, while observation pods whisk passengers high above deck level for a seagull’s eye view of the vessel at sea. For an older clientele expect planetariums at sea, West End shows and celebrity chefs.

Come evening, guests on three of the ships in the Norwegian stable will wrap up warmly for a drink at the world’s first Ice Bars afloat, while on Ovation of the Seas guests can (perhaps ironically) order their Old Fashioned at the Bionic Bar to be shaken up by two bartending robots.

Rooms are becoming ever-more luxurious too, with balconies and penthouse suites on the rise. Even inside cabins – without window or balcony – are offering digital walls that project a view of the outside world. Royal Caribbean’s Symphony of the Seas has certainly upped the ante for family travelers: the ‘Ultimate Family Suite’ is spread over two levels, with a floor-to-ceiling Lego wall, and a slide from the kids’ bedroom to the living area.

Conversely, though, some of the growth has come from shrinking ships, not expanding them. Boutique cruise operators are offering a more intimate, luxurious experience at sea, with refined culinary offerings, curated wine experiences and bespoke shore excursions. Service is becoming more personable and tailored, more akin to a private yacht than a Vegas resort on water. These smaller vessels are also able to call at ports inaccessible to the mega-ships and their all-you-can-eat on-board entertainment.

At the sharp end of the luxury spectrum is Regent Seven Seas (RSS), which offers all-inclusive cruising without any pesky surcharges for fine wine, shore excursions or on-board WiFi. It recently invested R1.6 billion in a major refurbishment of the four ships in its fleet. A further bellwether of the rude health of the luxury cruising segment is the addition of a new ship to the RSS fleet.

Accommodating just 750 guests – in contrast, the largest vessels carry nearly 10 times that – the all-suite all-balcony Seven Seas Splendor departs on its maiden voyage in February 2020, a 14-night trans-Atlantic crossing from Barcelona to Miami.
‘There really is something for everybody, whether you’re looking for a family-style cruise or luxury six-star cruising,’ says Shaun McCarthy, general manager of White Star Cruises, which represents the Cunard Cruise Line and P&O Cruises in SA. McCarthy comments that ‘it is becoming more and more affordable to cruise… [and] people are seeing the value in cruising and that there is so much different product out there’.

Value has certainly been the biggest driver of the growing appeal of cruise holidays. Though extras ranging from on-board alcohol to shore excursions to WiFi access will add to the cost, at its most basic a cruise holiday offers exceptional value-for-money. Base fares cover accommodation, meals, entertainment and use of nearly all on-board facilities. Pay once, and then relax.

So it’s little wonder that cruise demand has boomed in our cost-conscious, value-seeking SA waters. That’s largely thanks to MSC Cruises, the only cruise line to offer regular scheduled services out of SA ports during the summer season, when sea conditions are conducive to cruising.

While the MSC Sinfonia and MSC Opera have become regular fixtures in local waters over the past decade, in the 2018/19 season it’s the turn of the MSC Musica to welcome SA travellers. As in previous years, the ship will operate the bulk of its departures out of Durban. Expect a combination of the ever-popular short-break voyages to Maputo and Portuguese Island alongside a handful of longer itineraries to Pomene in Mozambique, Mauritius and Reunion. Journeys between Durban and Cape Town are also offered, as well as select voyages from Cape Town to Namibia.

The growing number of cruisers traveling through local ports has also sparked a welcome upgrade of port infrastructure. In 2016 a long-overdue new cruise facility opened in Cape Town harbour, while Durban recently inked plans for a new R200 million cruise terminal that is set to open by late-2020.

At the signing ceremony, MSC Cruises executive chairman Pierfrancesco Vago, said: ‘This agreement represents a great development for MSC Cruises’ South Africa operation. We could not be prouder. It will also be a major stepping stone for Durban, paving the way for a bright common future for the cruise industry and the city.’ He’s not wrong. With ongoing improvements in port infrastructure, international cruise lines are increasingly adding SA to their summer schedules.

Last year more than a dozen different ships called at SA ports, bringing well-heeled visitors to local shores, and often providing the chance for local travelers to hop aboard for the next leg. In 2019, both the Queen Elizabeth and Queen Victoria in the Cunard line will call at SA ports. Meanwhile December 2018 will see the maiden call of Seven Seas Explorer, an all-suite ship that ranks among the most luxurious at sea.

The Silversea Expeditions ship Silver Discoverer will also call in as part of her voyage around Africa and the Indian Ocean islands, with local travelers able to join the ship in Durban for a six-night Indian Ocean experience.
‘In recent years, many international cruise lines have either operated a short season in South Africa, or called at our ports as part of their world cruises,’ according to Gaynor Neill, general manager of Cruise Vacations, which represents Silversea Cruises in SA. ‘We have found in recent years, during Silversea Cruises’ short South African seasons, that this holds most appeal for guests who are looking for a luxury cruise experience without having to travel to a long-haul destination,’ she adds. 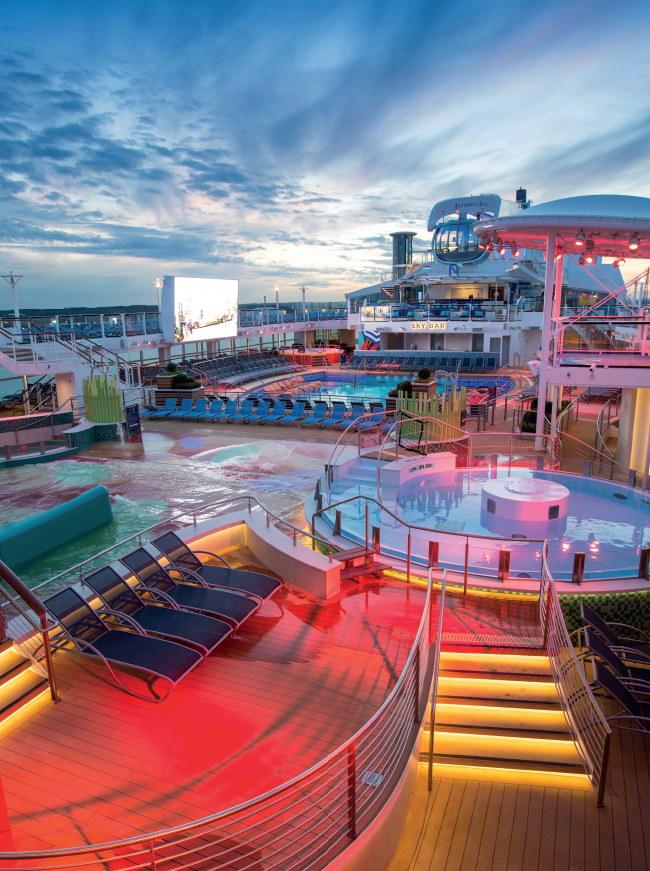 Yet for some travelers the notion of a cruise in exotic waters only adds to the appeal. Who, in the depths of an SA winter, wouldn’t fancy a week cruising between the balmy beaches of the Caribbean, exploring exotic Asian cities, or walking through the historic ports of the Mediterranean?
When it comes to winter sun, ‘the Mediterranean still remains a popular destination among our cruise guests’, says Janine Pretorius of Encore Cruises, local agent for all-inclusive luxury line Regent Seven Seas.
‘With its rich culture and history, it offers something of interest for everyone.’ Further afield, voyages to Polynesia, Cuba and Albania have all piqued the interest of cruise fans seeking a little more adventure, adds Pretorius.

That said, it’s important not to be too blinded by the array of on-board distractions offered by the new breed of mega-ships. While these floating resorts certainly have their niche, they too often distract from the point of cruising, which, surely, is to travel.

Neill believes it is essential to ‘encourage travelers to think outside the deck plan. These days much focus is placed on the destinations visited, and immersive and cultural experiences’. With easy air connections and a welcome lack of onerous visa requirements, ‘South East Asia also holds huge appeal for the South African traveler’, says Neill, while opting to sail on smaller vessels ‘opens up some phenomenal travel opportunities’, from the Arctic to Papua New Guinea. 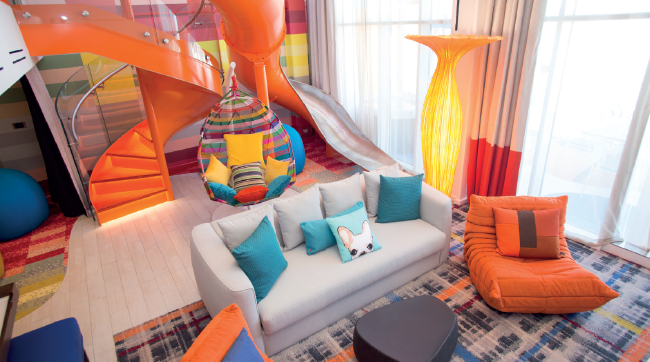 It’s all a far cry from the early days of cruising, and today you’re as likely to find a millennial updating their Instagram feed as you are a couple of baby-boomers tapping into the ‘skip-gen’ trend and taking their grandchildren abroad. The beauty of cruising in the 21st century is that there’s something for everyone. All you have to do is listen out for the ship captain’s call for ‘All aboard!’