Can employers make having the COVID vaccine mandatory?

Amid the relief bordering euphoria sweeping SA since the arrival of vaccines offering significant protection against the pandemic that’s been ravaging business and industry, comes a fresh concern. How will companies respond to those employees or unions who might decline a jab?

According to an Ipsos survey conducted in partnership with the WEF, as of mid-December just 53% of South Africans would gladly accept the vaccine, with levels of mistrust increasing by 15% since October and outstripping the global average. Of the 15 countries surveyed, only France (40%) and Russia (43%) had greater mistrust. The main reason for refusing a vaccine (cited by 65% of SA respondents in the survey) was concern about possible side effects. A quarter of respondents said they would decline the vaccine because they believed ‘it would be ineffective’ in preventing infection.

‘Like all other vaccines, including those formulated to combat the common flu, the COVID-19 vaccination is likely to be met with both suspicion and opposition,’ says Imraan Mahomed, director of employment law at Cliffe Dekker Hofmeyr (CDH). He and colleagues Riola Kok and Rethabile Mochela note that employees who resist vaccination are likely to have either medical, safety or religious/cultural/philosophical objections.

Among those raising medical reasons could be ‘employees in high-risk categories’ with conditions that may make them susceptible to a negative reaction to the vaccination; people with a compromised immune system; or ‘employees who have shown no sign of the virus over the period of the pandemic’. Those citing safety reasons would probably be younger employees without co-morbidities, who ‘did not require a vaccine on the advice of their primary-care physician’.

Individuals with religious, cultural or philosophical objections might raise them on grounds such as vaccines potentially including ‘substances such as swine, whose consumption is prohibited for religious reasons’. (Gelatine derived from pork has been widely used as a stabiliser to ensure vaccines remain effective during storage and transport. However, Associated Press reports that spokespeople for AstraZeneca, Pfizer and Moderna have said there are no pork products in their COVID-19 vaccines.)

‘One of the greatest impediments to the eradication of polio in Africa was the association of vaccines with many traditional or cultural superstitions, including an inherent distrust for Western medicine in a newly decolonising continent,’ adds Mahomed.

Given all this, how does an employer deal with employees who refuse to be vaccinated – especially as they are not obliged to get a jab?

Addressing the nation in early February to announce the roll-out of the first batch of vaccines for front-line health workers, President Cyril Ramaphosa emphasised that no one would be forced to take the vaccine. ‘Nobody will be forbidden from travelling, from enrolling at school, or from taking part in any public activity if they have not been vaccinated,’ he said. ‘Nobody will be given this vaccine against their will, nor will the vaccine be administered in secret. Any rumours to this effect are both false and dangerous’.

This is in line with current vaccination policy, says Mahomed. ‘At this stage, save for yellow-fever vaccinations in specified international travel, South Africa does not have a policy of compulsory vaccination, and it is clear from the President’s address on 1 February that there will not be a general law obliging the population to be inoculated.’

Even the vaccination schedule prescribed for children is only ‘encouraged’ by the Department of Health – there is no legal requirement for parents to ensure children have their shots. However, Mohamed says, ‘a refusal to submit children to vaccinations may create practical impediments in light of the regulations which concern school immunisation’. He adds that ‘surprisingly, these have not yet been tested in court’.

Any mandatory employer vaccination policy would need to be considered against the backdrop of the country’s Constitution and the need to balance the rights of employers and employees, he says. Section 12(2) provides that ‘everyone has the right to bodily and psychological integrity, which includes the right to security in and control over their body’. But the autonomy is not absolute, as the Constitution also permits limitation of rights in terms of a law of general application, to the extent that it is ‘reasonable and justifiable’ and ‘affirms the democratic values of human dignity, equality and freedom’.

The Constitution also protects the individual’s rights to religion, belief and opinion, and the right to life. These rights, however, need to be balanced against the devastating effects of the pandemic and lockdowns. And in SA, an employer has an obligation to protect employees and maintain a healthy and safe workplace. Section 36 of the Constitution allows for individual rights to be limited for the greater good of the nation, as long as restrictions are reasonable. 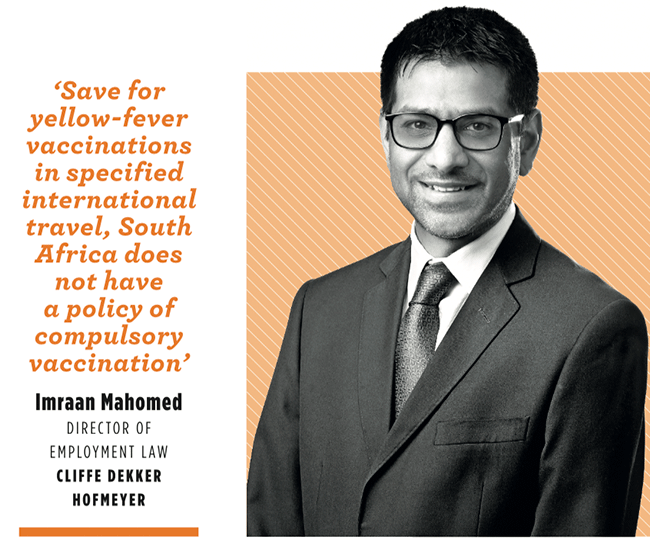 ‘Many employers are wondering whether it is legally permissible for them to require employees to be vaccinated as a condition to returning to, or continuing to perform work from, the physical workplace,’ according to Talita Laubscher and Chloë Loubser, partner and senior associate respectively at Bowmans’ employment and benefits team. ‘There’s no simple or easy answer, and decisions will need to be taken on a case-by-case basis after a careful balancing of various rights and obligations.’

The National Health Act of 2003 gives effect to the constitutional right to bodily integrity and makes it clear that a health service  (which would include vaccination) ‘may not be provided to a user without the user’s consent’, they say. The consent must be for a ‘specific health service’ and be informed – meaning ‘the individual must have full knowledge’ of options generally available to them, ‘the benefits, risks, costs and consequences generally associated with each option’, and their ‘right to refuse the health service’, as well as of the ‘implications, risks and obligations of such refusal’.

In addition, say Laubscher and Loubser, the Occupational Health and Safety Act (OHSA) of 1993 requires an employer to provide and maintain a safe working environment for both its employees and other people who have access to its premises, such as clients, customers or suppliers. However, an employer is only required to do what is ‘reasonably practicable’. This, they explain, requires an employer to consider factors such as the severity and scope of the risk, which – when it comes to contracting COVID-19 in the workplace – ‘will largely depend on the nature of the workplace and the work performed, and the availability and suitability of means to remove or mitigate that risk’.

Laubscher and Loubser highlight the main principles to be considered regarding making vaccination compulsory. Firstly, if an employer excludes employees from the workplace on the basis that they have not had their jabs, ‘such a policy effectively forces employees to have the vaccine and this undermines the voluntary nature of consent’. But the extent to which this may be case will depend on the consequences that may arise if the employee is not vaccinated. ‘If these are simply that the employee will continue working remotely and will not be prejudiced by the decision not to have the vaccination, then it may be arguable that the employee retains the ability to decide voluntarily to obtain the vaccine to retain their job.’

There are also circumstances in which a mandatory vaccination policy will be permissible, they add – such as if not having the vaccine may create a serious risk to public health. This could be the case in work environments with large groups of employees, such as call centres, mines and factories, or where large numbers of people are served or may be affected, such as retail or food manufacturing operations. Lastly, where there are ‘less intrusive means’ to ensure a safe working environment and where there is not a serious risk to public health, these should be taken – including physical distancing, mask wearing and hand sanitising. ‘An employer would likely meet its duty in terms of the OHSA without the need to require compulsory vaccinations,’ say Laubscher and Loubser.

It may be more effective, and less risky, for employers to educate their employees about the vaccine and encourage them to get their jab, rather than insisting they have it to enter the workplace, according to Laubscher and Loubser. ‘Without a general law that requires all people to be vaccinated, employers will need to tread carefully when considering mandatory vaccination policies, given the competing rights and potential legal risks involved.’

Lizle Louw, partner at Webber Wentzel, points out too that ‘a mandatory vaccination policy would constitute a challenge to an employee’s terms and conditions of employment, which cannot be made unilaterally but requires the consent of both parties’.

What’s more, Mahomed notes that employers could be liable for mandating employees to take the vaccine if they become ill as a direct result of this.

‘Ultimately, every employer must determine the necessity of implementing a mandatory COVID-19 vaccine policy for its workplace,’ he says. ‘It may be beneficial to encourage vaccination but not require it, as the most effective vaccination programmes are by consent, not by compulsion. Considered legal advice will need to be obtained as employers begin to wrestle with this aspect of the virus entanglement in 2021.’