There is ‘nothing cool about an SUV’, McLaren’s Darren Goddard told the Australian press recently, lecturing rivals for chasing volume over marque purity and excellence. It’s an interesting debate – economic success over brand chastity. But in boardrooms and showrooms the decisions have been made: SUVs are the confirmed darlings of motoring, helping to keep a struggling industry afloat.

If VW can’t leverage SUV kudos from that lot, it’s rubbish at marketing. T-Cross itself is not an off-roader, has no all-wheel drive functionality and is intended for the high-is-fly brigade intent on a better view in traffic and one-upmanship over their Polo brethren. If you want dirt-road ability, wait for the dizygotic T-Roc, due later in 2020. But more about those upmarket cousins. Sports SUVs? Step into the showroom. Audi will soon reveal the SQ8 TDI and a little later, for effect, that agent of extreme, the RSQ8 – chaos in a tux, all V8 500 kW of it – able to see off that other Audi barnstormer, the R8, believe it or not. The Q8 has been a qualified success in SA, playing to the aesthetic gallery with its sports coupé overcoat and SUV boots. It lacks genuine grunt in its current 3-litre SA iterations though, and the S and RS should do the trick nicely. Down the Audi pecking order (but much more important) is the new Q3, a volume seller vital to Audi’s overall health.

The new version’s single-engine offering in SA (for now), the confusingly titled 35 TFSI (it’s a 1.4-litre petrol engine), stretches Audi’s credibility as a sporty option. But the manufacturer has promised to pull an RS version out of the hat soon enough. Good call – the ubiquitous VW AG MQB chassis can certainly handle far more power and the RS moniker will help set it apart from its equally popular, very beautiful Tiguan cousin, which shares so much of its DNA.

For something entirely new, Audi’s e-tron is promised soon. The marque has been sloth-in-a-quagmire slow to the electric party, but this 432-cell, 700 kg lithium-ion offering should hold its own against the Mercedes EQC and Jaguar I-Pace. It promises a 400 km range from those batteries, feeding power to dual electric motors, located on both the front and back axles.

MERCEDES-BENZ
Ever resourceful, Mercedes-Benz is in the middle of reinventing the way it sells cars – combining digital and physical spaces in a seamless journey that begins at home. Into this process arrive a series of reimagined stalwarts and a few newbies, starting with the latest iteration of the ageless ML, Merc’s first modern SUV, if you discount the industrial Geländewagen which, as the G-Class, has just celebrated its 40th year with an ultra-luxurious facelift.

The ML has of course been reinvented as the Mercedes GLE, the latest version happily retaining much of the ML’s genuine off-road ability, even as it makes a play for world’s most complex digital car. Dash, electronic brain and adaptable chassis are next-level Star Wars, though (mostly) easy to use. Physically it borrows from the trend of sports coupés, a vogue styling that flattens, broadens and butchifies previously bulbous SUVs. The transformation is largely successful – a range of sublime diesels and excellent noise and vibration suppression makes for an ultra-sophisticated, wholly efficient mud-hopper.

Buoyed by sales of this and other Mercedes SUVs, MBSA has announced the introduction of the Mercedes GLB to fit into the line-up between the GLA and GLC. Squarer, more BMW X3-like than either the teardrop GLC or GLA, it’ll find favour with those after a genuinely practical carrier of goods and people. Engines will mirror the GLC and a seven-seater option is likely. 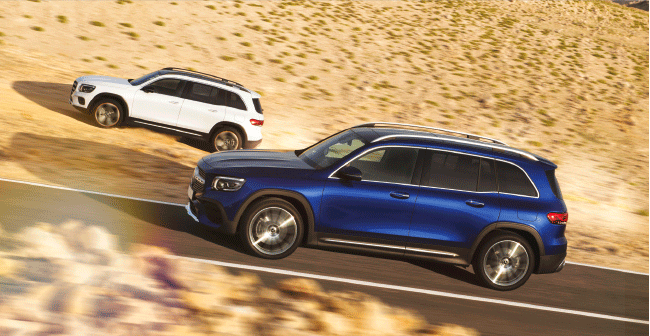 If the GLB will appeal to the sensible, the new Mercedes-Benz GLS will be a relief to the marque’s top echelon of buyers piqued at the success (and undeniable excellence) of the BMW X7, particularly the M50d. It’s bigger, quieter, more luxurious and demonstrably grander than the old GLS, though locals will have to wait for a V8 engine; only the 3.0-litre, inline-six turbodiesel is offered for now.

Or maybe not. If badge kudos is everything, Mercedes is planning a Maybach version of the GLS, which, if rumours prove correct, will blow the X7 out of the water with its twin-turbo V8 petrol mill. Think of it as the AMG GLS but with the Maybach grille that just happens to look a great deal like the gaping maw of the current X7. Running counter to all this size and testosterone is Mercedes’ EQC, its first foray into the electric market, which will arrive soon. It was shown last year in Cape Town and consensus is it is surprisingly restrained (very similar to the GLC) as many of the electric pioneers have been.

Maybe their aim is not to frighten an already sceptical audience with outlandish Barbarella designs, but rather to pretend the electric brothers are just like their coal-eating brethren. A missed opportunity many believe; after all, an electric car need not look like a conventional vehicle – it doesn’t have a gigantic internal combustion engine to dictate design.

LAND ROVER
The Indian-owned British manufacturer is at the end of a seemingly endless model-reinvention cycle, with Range Rover, Discovery and finally Defender neatly presented as a one-stop SUV shop. The idea is to offer various price points but no compromise on off-road ability. At the hard core end of the ability spectrum is the reimagined Defender, a mammoth undertaking given the iconic status of the historically important original. Land Rover was eager to present something all new, rather than the ‘halfway approach’ of the latest Mercedes G-Class, as Jaguar Land Rover CEO Ralph Speth put it, echoing earlier comments by designer Gerry McGovern. The tough new Landie initially gets two engines in SA – a 2-litre turbo-diesel with 177 kW and 430 Nm, and a 3-litre, six-cylinder, mild hybrid petrol unit good for 294 kW and 550 Nm. Inside it’s more Sandton than Sani Pass, posh two-tone leather and a digital bouquet announcing it very much of this century rather than the last. It will sell very well, as much for its price point as its heritage.

BMW
Munich is basking in the reflected glory of its 50d engine triumphs – in the hugely successful BMW X5 M50d xDrive Steptronic and the surprisingly good X7 M50d. Both cars benefit from the quad turbo-charger unit, allowing for effortless grunt at any and every step of the acceleration process. It’s a genius engine, and frugal too, surely one of the best combustion units in motoring history. The X7 also gets a cushy ride thanks to the adaptive air suspension and forgiving tyre profiles, making it a grand super cruiser, equalling Bentley’s Bentayga, previously the large SUV category benchmark. 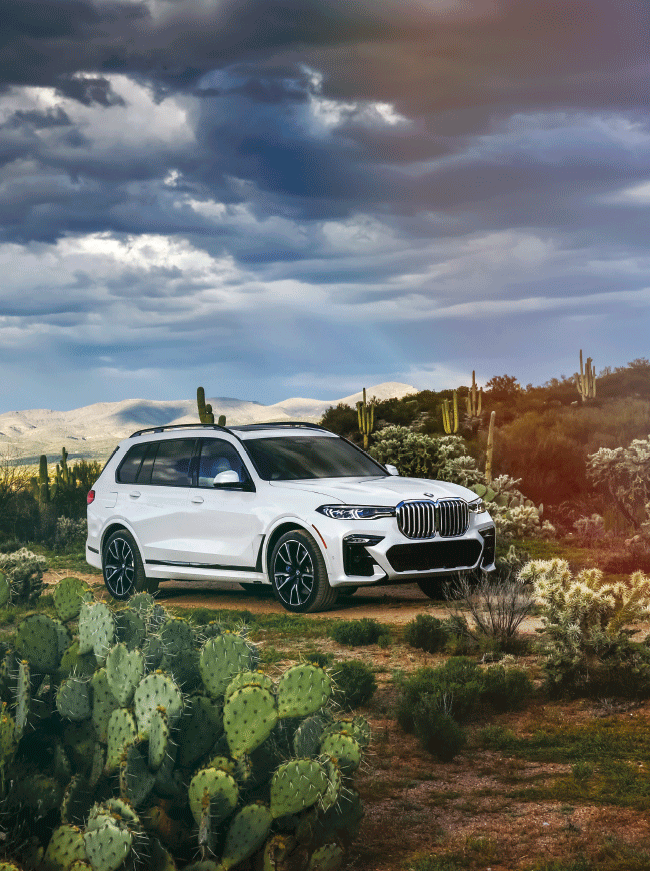 JEEP
All the Jeep noise has been about the Grand Cherokee Trackhawk, a Yankee monster capable of eating supercars for breakfast. The Trackhawk’s supercharged 6.2-litre V8 is good for 522 kW and 875 Nm, deployed to all four wheels via an eight-speed automatic transmission that has been specially strengthened to handle the ridiculous amounts of twist. Fast? Very. 100 km/h in 3.5 seconds, topping out at a shade under 300 km/h; insane figures for what is essentially a barn on wheels. Equally frightening is the R2.2 million price tag. 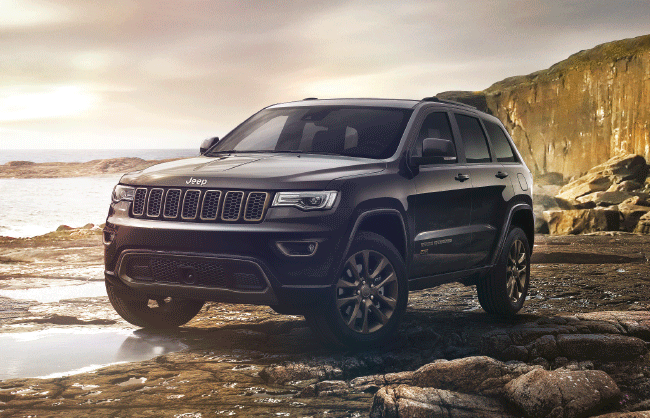 So heralded was the Trackhawk that the arrival of the latest Wrangler went almost unnoticed. The much-loved, go-anywhere Jeep keeps its Sahara and Rubicon monikers but gets a massive price increase – upwards of R300k. You get the same 3.6-litre V6 Pentastar engine, mated to an eight-speed automatic transmission, aluminium doors; a digital dash; more room inside; and a better ride on tar, with less float and a great deal less noise. Will it make a dent here? At this price point it’s a tough ask, but Wrangler fans are a fanatical lot and it’s likely to remain the go-to butch truck of choice for the no-compromise crew. At least that’s what Jeep is fervently hoping.

As 2020 begins, it’s blindingly obvious that the SUV is here to stay, in all its shapes and sizes. Even the most vociferous naysayers have been convinced of the economic sense. Witness the announcements that both Aston Martin and Ferrari will enter the fray soon enough, the Brits with the DBX and the Italians with, wait for it, the Purosangue FUV (‘thoroughbred’). The racing marque can’t even bring itself to use the SUV acronym, choosing Ferrari instead, a sign of the times surely, even the purists dragged kicking and screaming into the mud. How long then before Goddard and McLaren eat humble pie?