Structured competitiveness and a level playing field are the basis of any effective economic system. Incisive potential changes to the country’s competition and anti-trust laws – currently before Parliament – seek to improve conditions for a more equitable market.

Khumisi Kganare, founder and director of Kganare Khumalo Incorporated, notes that SA competition law differs from international systems as it focuses not only on competition issues, but also on certain public interest and social goals, such as the promotion of small businesses, the interests of employees and BEE. It is indisputable therefore that the goal is to enable the competition authorities to take steps aimed at ending the exclusion of the majority of South Africans from owning a stake in the economy, he says. ‘The letter and the spirit of the Competition Amendment Bill of 2017 seem completely aligned on the issue of transformation.
‘The proposed amendments generally strengthen provisions of the Competition Act of 1998 relating to collusion, abuse of dominance, price discrimination, merger control, exemptions from prohibited practices and market inquiries.’ Kganare says concentrated markets that inhibit new entrants and, accordingly, exclude large numbers of black South Africans from the opportunity to run successful enterprises, are not a basis for strong and sustained growth. They continue to limit the talent pool of entrepreneurs on which the growth potential of the economy relies. An inclusive growth path requires that these barriers to entry are addressed with great effectiveness and efficiency.
‘Some of the important objectives of the act are to ensure that small and medium-sized enterprises have an equitable opportunity to participate in the economy; and to promote a greater spread of ownership, in particular to increase the ownership stakes of historically disadvantaged persons. The bill recognises that at the same time as tackling economic concentration, it is imperative to address the persistently racially skewed profile of ownership of the economy, [and] that instruments and mechanisms addressing economic transformation must ensure inclusive and meaningful change and avoid being superficial so as to circumvent undesirable practices, like fronting.’ 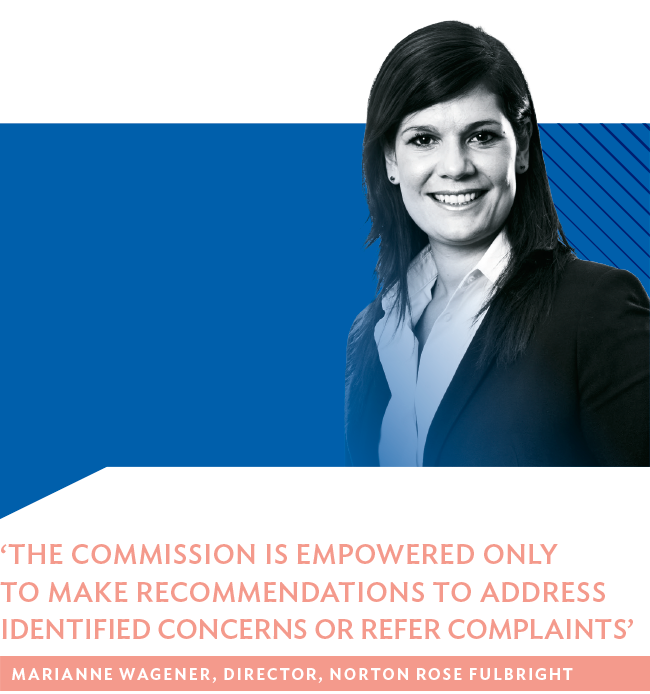 Marianne Wagener, director at Norton Rose Fulbright, says in terms of the bill, market inquiries will now become the chief mechanism for analysing and tackling structural problems in the economy, namely concentration and ownership – that’s if all the proposed amendments are adopted in Parliament. ‘Under the current market enquiry provisions, the commission is empowered only to make recommendations to address the identified concerns or to refer complaints to the Competition Tribunal. The proposed amendments, however, allow the tribunal to use any of the other remedies currently permitted under the act to address the findings of the commission following a market enquiry, including using any of the remedies that target prohibited practices or abuses of dominance, and potentially voiding anticompetitive agreements – including the conclusion of consent orders.’

Wagener further points out that, significantly, forced divestiture can now be used as a remedy following a market enquiry, should the proposed changes be written into law. However, it’s proposed that as a safeguard, a divestiture remedy can only be imposed by the tribunal following a recommendation by the commission, and that there must be a right of appeal to the Competition Appeal Court.
‘The proposed amendments in the draft bill will, if implemented, radically change the way that prohibited practices – such as cartel formation, collusion and price fixing as well as mergers – are investigated and prosecuted by competition authorities.’

HB Senekal, director of competition at ENSAfrica, feels current legislation is sufficient to ensure that competition in markets happens fairly. ‘Unfortunately, with the introduction of criminal sanctions for cartel offenders, the most useful tool the Competition Commission has – its Corporate Leniency Policy [CLP] – will now be less utilised, as the leniency applicant may still be prosecuted criminally. ‘To date, the CLP has been a very successful tool for the commission to unearth and prosecute cartel behaviour and prevent further cartels from being formed. In fact, most of the high administrative penalties that have been imposed on offenders originated from leniency applications.
‘In addition, the commission also has the ability to conduct dawn raids and has increasingly started using it over the last three years. The downside to dawn raids is that it can take years before the commission actually gets access to the seized information given various legal challenges on process and privilege by respondents.’

Senekal further disagrees that penalties imposed on offenders by competition authorities are not a sufficient deterrent to anti-competitive conduct.Historically, he says, penalties were perceived to be low but nowadays the commission seeks the highest-possible statutory penalty – 10% of a firm’s turnover in all cartel matters in both consent order/contested referral proceedings. ‘The ultimate penalties that are imposed are usually still below the 10% statutory cap but we have seen a significant increase in quantum in the past four years. Certain companies have actually exited the market partially as a result, especially foreign entities that close their operations in South Africa after a competition-law infringement.’ 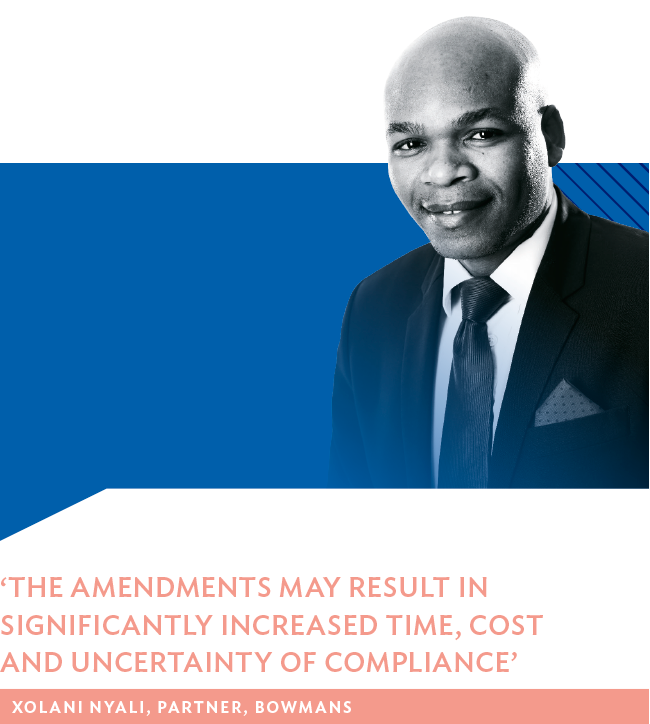 Xolani Nyali, partner at Bowmans, says that while the objectives behind the proposed amendments are laudable and align with the constitutional imperative to achieve meaningful transformation, some of the provisions raise ‘serious concerns’ as they’re either not clearly articulated or because they could have unintended consequences, such as softening competition between firms or ‘chilling’ potentially pro-competitive investments.
‘Without unpacking each of the proposed amendments – and whether they in fact increase consumer welfare [and] the ability of the competition authorities to effectively implement the provisions of the Competition Act or achieve structural changes to the South African economy – our overall impression is that the amendments may result in significantly increased time, cost and uncertainty of compliance, without any demonstrable benefit to free and fair competition in markets and, ultimately, consumers.’

He adds, however, that the proposed amendments do hold some novel and innovative solutions. ‘Focusing on cartel and exclusionary conduct, the drafters of the amendments studied the decisions of the Competition Appeal Court on abuses of dominance, for example, charging an excessive price and the general offence of engaging in exclusionary conduct. They have proposed amendments that dovetail with the arguments advanced by the commission in these cases.’ In the main, these arguments were rejected by the courts.

Further, Nyali doesn’t believe there’s anything untoward about the government – which agreed that, while the arguments posited by the commission in these cases are the correct approach, they’re unsustainable under the current legal provisions – deciding to amend them.
‘The only challenge we see with some of the amendments is that they proscribe certain conduct by any firm with more than a 35% market share, that may be pro-competitive, efficiency enhancing or even neutral – thus inhibiting firms from competing robustly or seeking to lower input costs, as in the case of the provisions in the proposed amendments to outlaw buyer power.’ He says put differently, the provisions could increase the risk of false positives when firms seek to identify potential anti-competitive conduct, with chilling effects on competition in the long term.

According to Nkonzo Hlatshwayo, partner at Hogan Lovells, one of the key features of the proposed amendment bill is that considerations in relation to the spread of ownership by historically disadvantaged persons will be given prominence, as contained in the preamble of the Competition Act. The amendments will certainly address the transformative agenda of the country by improving equitable opportunities in the economy, he says.
‘Economic Development Minister Ebrahim Patel stated in relation to the amendments: “The bill is quite a significant policy shift by government, to introduce economic concentration as an explicit consideration in all competition proceedings”. This will enable the competition authorities to go where no one else has gone before, to address a sector of the economy without any proof of fault,’ says Hlatshwayo. ‘Under the current regime, unless a specific actor in the economy acts in a manner contrary to the Competition Act, there is very little that the competition authorities can do. However, this is set to change.’

Furthermore, Hlatshwayo points out that when it comes to market inquiries, the Amendment Bill proposes to increase the powers of the commission.
‘The bill states that the commission’s findings and actions are binding in relation to market inquiries, unless they are challenged in the Competition Tribunal – s43A to s43G. This is particularly important as the amendments seek to address concentration and transformation in affected industries,’ he says. ‘The amendments highlighted above are only a part of the complete list of proposed amendments in the Competition Amendment Bill and, on the face of it, they seem to allow increased powers to the Competition Commission.’