The JSE provides the largest and most liquid bond market on the continent, and mining companies – like those in other sectors – take advantage of this through a variety of available debt instruments. Last year, more than 700 bonds were issued on the exchange, which has a total of R3 trillion in issuance.

Altaaf Aboo, Bonds Specialist in the JSE’s Capital Markets division, says there are a number of options companies will consider when raising capital. They could raise equity (via new shares), issue bonds or raise debt from financial institutions. ‘Factors such as cost and how long the capital will be required, i.e. tenure, will determine the instrument to be used,’ he says.

The advantage of debt, explains Aboo, is that the company would not have to dilute the current shareholders’ ownership of the company. ‘This means that the lender is only entitled to be paid back the interest plus the capital, and has no share in the profits of the business. Also, interest is tax deductible, and because interest payments are usually known in advance, companies can plan better.’

Bonds have a further benefit too: the interest rate that corporates would pay to bond investors is generally less than the amount they would pay to a bank if they had loaned the money. The issuer is also able to be in control of the terms of the bond – in other words, the conditions under which they would like to borrow. Contrast this with a loan where the bank dictates the terms. 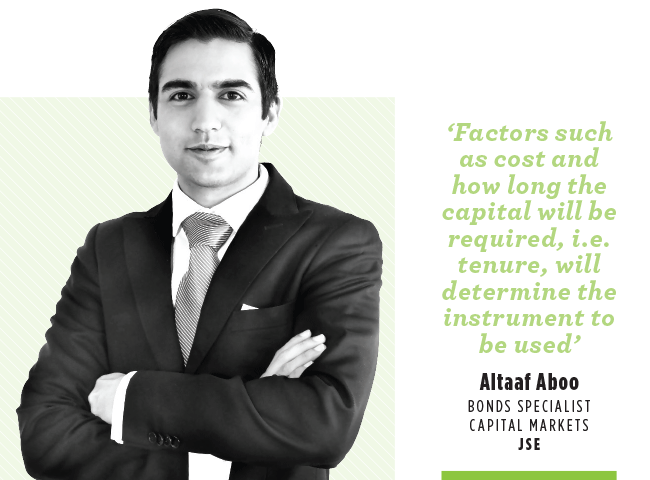 The final decision would be based on the needs of the company in terms of cost, tenure and risk.

If a company elects to issue a bond, they could decide to raise a specific type of bond. Project bonds are one such option. The proceeds of project bonds are used for a specific, standalone project and are repaid from the cash generated by that project. These are commonly very long tenure, in other words 20 years-plus, and tend to be based on projects where there is a relatively stable and long-term cash flow.

Even though mining houses would not consider these for their core activities, there may be several non-core projects, such as water or energy, that they could be used for.

Green bonds are exclusively used for the ‘financing or re-financing of new or existing eligible green projects’, says Aboo. Mining companies can use the proceeds of a green bond to fund activities that provide a relatively lower carbon footprint in their current mining activity. This will obviously have to be scrutinised by an independent verifier.

Mining companies could also use the proceeds for green projects that are not a core part of their business, such as the production of their own electricity through renewable sources, such as solar.

Over the past number of years, mining companies have raised both fixed and floating rate notes, typically in the one- to five-year tenures. Until now, says Aboo, they have not yet moved into any non-traditional instruments, given how new they are globally. These may find traction with the mining sector over time.

‘The JSE’s debt market will provide a large pool of investors with new and innovative instruments that can meet both the issuers and the investor’s needs.’