The automation of the drilling fleet at Anglo American subsidiary Kumba Iron Ore’s Kolomela mine in the Northern Cape has brought about big changes in the way rock drill operators work – accelerating the drill rate and reducing costs. It has also significantly improved their safety, with 70% fewer injuries and fatalities.

‘Importantly, no jobs were lost. Drill operators embraced the change,’ said Kumba Iron Ore CEO Themba Mkhwanazi in a speech at an African Mining Network event in May. He gave the example of Leigh Ann Booysen, who worked as a drill operator for four years. ‘She told us she never wants to go back to the old way of working and that she can now proudly boast to her family that she has an office job.

‘We now have six drills, fully automated and operated from a remote command centre located next to the offices. This has increased operating hours by 20%, from 14 to 17 hours a day. We don’t have to stop drilling to change drivers down in the mine. They simply swap seats in the control room at the end of their shift. Because we operate drills for longer, we will need less of them over the life of the mine – which is a huge saving.’

Automated drilling, which is part of Anglo American’s overarching FutureSmart technology programme, allows a glimpse into what’s in store for SA’s mining workforce – where humans will eventually be removed from high-risk underground operating areas.

The SA Chamber of Mines envisages that by 2020, the stoping and development cycle will be fully mechanised with remotely operated equipment. By 2025, the sector should be operating a 24/7 mechanised mining system without explosives.

‘Mines will begin to operate more like factories,’ says Chris Nthite, AngloGold Ashanti spokesperson. ‘This requires a shift from traditional, physically demanding mining skills to a greater level of skill in operating and maintaining more modern mining equipment. The requirement for different and more complex skills is already here. Even the age-old underground locomotives are now equipped with touchscreen-based control and safety systems that call for re-skilling of current employees.’ 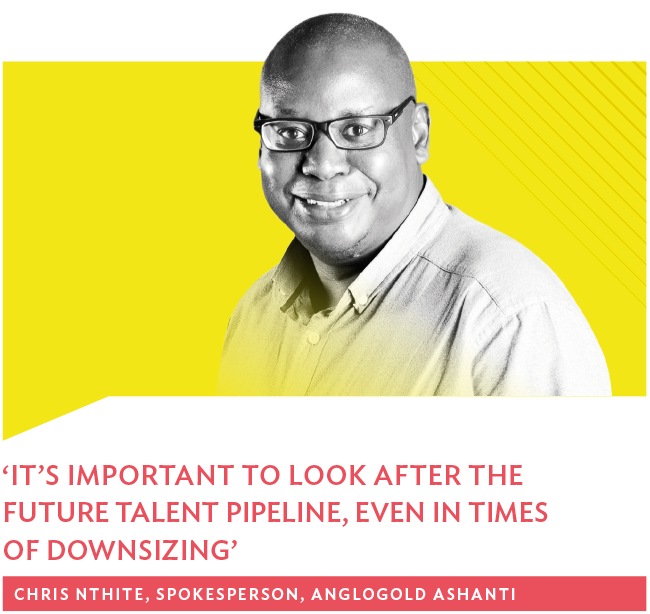 In another example of tech innovation, Kumba Iron Ore introduced 10 drones at its Kolomela and Sishen mines that can be used to calculate ore volume by creating 3D images in areas unsafe or inaccessible for workers. ‘Flying a drone requires a high level of skill, so five of our staff were trained as pilots and received their licences from the SA Civil Aviation Authority to use the technology,’ says Mkhwanazi.

The mining sector must address critical aspects, such as change management, leadership, re-skilling and training requirements, in addition to technical challenges, says Navin Singh, CSIR mining and mineral resources manager. ‘Modernisation will have a direct impact on the workforce and, inevitably, on the number of people employed in mining.’

Nearly 40 000 mining jobs were lost from the start of 2015 to the end of 2016, according to the Chamber. Sadly, more jobs are currently being lost. However, the Chamber is pushing for a holistic systems and people-centric approach to modernisa-tion, which could save around 200 000 jobs by 2030.

Singh points out that the transition to modern mining methods is gradual, and underground mine employees will still play a role in the near-to-medium term. ‘It will probably take three to five, possibly 10 years, for the full suite of mechanised or fully autonomous mining equipment to be implemented across all mines,’ he says. ‘This allows us to revisit universities and TVET colleges, and develop curricula and training programmes to ensure that the skill sets of workers, artisans and graduates will be aligned with future industry requirements.’

He foresees a stronger reliance on ICT skills as well as a move towards mechatronics, with more focus on maintenance, and electronic and mechanical engineering skills. ‘Mining jobs of the future will still require a basic understanding of mining. But equipment operators will also need to understand how a piece of equipment works and how to manage it,’ says Singh.

At the high-end skills level, mining engineering specialists – as produced by the country’s four mining schools (based at the universities of Pretoria, Witwatersrand and Johannesburg, as well as UNISA) – will remain in demand. Singh believes that for the best results, teaching methods need to become more hands-on. ‘The traditional classroom-style teaching belongs in the past. You learn by doing,’ he says. ‘Obviously we can’t teach in a risky underground environment, so we need more virtual reality training methods to recreate underground situations in the classroom.’ Head of the Wits School of Mining Engineering, Cuthbert Musingwini, told Chamber members in May that both hard and soft skills were needed. ‘When cyber-controlled production systems in a Mining 4.0 environment becomes the norm of the day, we will need mining engineers with skills that can operate those systems and this requires a high intelligence quotient, emotional quotient, creative quotient and adaptive quotient. The time to create this arsenal of skills is now,’ he said.

Already, mining companies are continuously investing in their talent pipeline, says Mustak Ally, head of skills development at the Chamber of Mines. In 2015, the sector spent an estimated R5 billion on skills development in SA, with more than R1.5 billion going towards higher education. In addition, nearly 5 000 employees underwent adult education and training that year, while about 10 600 artisans enrolled in training and development between 2011 and 2015 (at a cost of R300 000 per learner) for jobs such as diesel mechanic, electrician, boilermaker, fitter and turner, and welder.

According to Ally, companies will continue this investment because of their social licence to operate and in compliance with the Mining Charter (which requires miners to invest 5% of annual taxable payroll in skills development, plus the general 1% skills levy that companies are required to contribute).

Another crucial reason is to avoid a shortage of artisans and engineers such as the country experienced in the mid-1990s/early-2000s after cutting back on technical training.

‘We cannot take the foot off the accelerator because we’ll need qualified mining professionals when the sector returns as a major economic contributor to the GDP. So yes, we’re still investing in training and development even in a shrivelling mining sector,’ says Ally.

Nthite agrees. ‘It’s important to look after the future talent pipeline, even in times of downsizing and though there may be fewer opportunities. We must constantly be seeking young, talented graduates – bringing them into the organisation and ensuring that they are trained and developed in a way that sets the organisation up for future success.’

The gold miner awards bursaries and broadens its talent base by offering work experience and training to youth from local communities.

Lonmin’s vice-president of HR, Khaya Ngcwembe, says that ‘the company was developing young professionals in selected disciplines by means of our bursar, graduate and learnership programmes for both our internal employees and within the greater Lonmin communities.

‘We all have to work together to create mining skills for the future. We may be competitors but we sit in the same boat and therefore need to share our ideas and our learnings.’

In 2016, the public-private Mining Precinct was launched in Auckland Park, Johannesburg to facilitate collaboration and communication between mining companies, government, universities and other role players. Singh, who is based at the Mining Precinct, says that focus areas include R&D, skills development and growing the local mining equipment manufacturing sector – which could revolutionise SA’s mining supply chain.

This could also create new indirect jobs (fields such as spare parts manufacture, maintenance, fuel, transport and training) to support automated drilling operators at Kolomela mine, drone pilots at Sishen, hackathon innovators at Wits and similar developments towards the ‘mine of the future’.