The SA economy was founded on the wealth of the mining industry, now a century-and-a-half old. But the industry has also left us with a legacy: crucial environmental issues, especially because of the high number of derelict mines. Abandoned mines offer a particular set of environmental problems, including long-term acid mine drainage (AMD) into the water and soil. The need to rehabilitate these degraded properties has become an urgent priority.

For most of the country’s mining history, the law did little to compel mines to operate sustainably. Today, there are reportedly more than 6 000 derelict mines across the country. ‘The mining industry escaped responsibility for environmental impacts for decades,’ says Carlyn Frittelli-Davies, director in the natural resources and environment department at law firm ENSafrica, adding that this has changed significantly. These days, the industry is faced with a raft of regulations. Among others, they must prepare detailed studies into the environmental impact of their proposed operations, and communicate these to the public. Importantly, they are also required to calculate the costs of ongoing rehabilitation and reserve the funds to cover this part of the mining process.

The path of environmental legislation has been neither simple nor inexpensive. A number of policy documents, acts and amendments have accumulated since the late nineties, notably the Mineral and Petroleum Resources Development Act and the National Environmental Management Act. The resulting patchwork of regulations, pre-2014, was widely considered by investors and the industry to be convoluted and confusing (‘two thousand bits of legislation’, as former Harmony Gold CEO Bernard Swanepoel was quoted as saying). Among other issues, mines had to acquire a variety of authorisations for prospecting, exploration, mining and production. Streamlining was badly needed.

In 2014, the government introduced the One Environmental System (OES): an effort to integrate environmental management of the mines into a single efficient system, with greater co-operation between departments and less red tape. The issuing of permits and licences was streamlined, and a 300-day processing period agreed upon. In this system, while the Department of Environmental Affairs (DEA) sets the regulatory framework and handles appeals, the Department of Mineral Resources (DMR) implements environmental legislation. This has proved a contentious decision, with many feeling the DMR is holding on to its historical powers for political reasons. As Garyn Rapson, partner in environment and natural resources at Webber Wentzel, asks: ‘Why do we need a parallel regime for the mining industry when the DEA is the rightful competent authority?’ 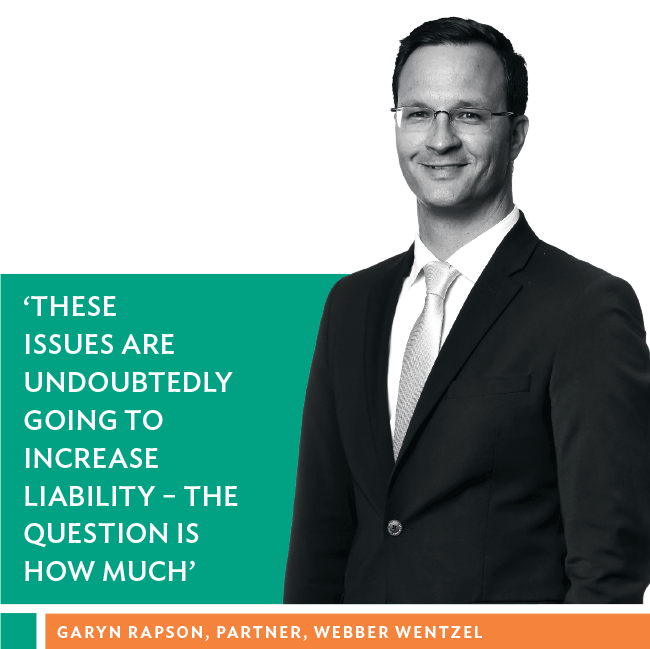 Nonetheless, the OES has achieved much of its streamlining goal. ‘The timelines are quite definite and you know what process to follow,’ says Rapson, who cautions that ‘streamlined’ might be good for business and investors, but not necessarily good for the environment. According to Alecia Pienaar, associate in the corporate and commercial practice at law firm Cliffe Dekker Hofmeyr, ‘the legislation is workable and guiding mines in the direction of compliance and environmental responsibility’.
Further, there is now more protection for wetlands and biodiversity, says Frittelli-Davies, with greater consequences for breaking the rules – including directors’ personal liability, which ‘provides the necessary stick’ to ensure compliance.

Problems persist, however. ‘We have extremely fragmented legislation that is riddled with uncertainties,’ says Pienaar, pointing to interpretive ambiguities and contradictions in the drafting of existing regulations, as well as those still pending. For example, the Carbon Tax Bill – due to be signed into law in June 2019 – doesn’t appear to align completely with the current Air Quality Act. ‘It’s all very muddled,’ says Pienaar. ‘We fear more uncertainty.’

There are also stubborn issues with government implementation, communication, compliance monitoring and enforcement of the law. An example, says Pienaar, is the handling of environmental-impact studies. ‘The industry invests a lot of time and money in doing these correctly in very tight time frames.’ However, when these reports, which can run to thousands of pages, are submitted for approval, they are often not processed timeously, which ‘puts the mines in a very difficult position from an operational point of view’.

The National Environmental Management Laws Amendment (NEMLA) Bill is an attempt to address some of the shortfalls in current legislation. NEMLA, which has been subject to numerous delays and contention, was passed by National Assembly in November 2018 and has been sent to the National Council of Provinces for assent.At the heart of these thorny issues, of course, is the fact that rehabilitation measures can be extremely expensive. The approved closure cost for Sasol’s Thubelisha coal shaft in Mpumalanga, for example, was calculated in 2016 at almost R85 million. And in 2015, the cost of the country’s total AMD clean-up was estimated at a staggering R60 billion over the long term.

These costs have forced some mining companies, already strained by a challenging operating environment, to reassess the future of their investments in SA. At the Johannesburg Mining Indaba in 2017, Cobus Loots, chief executive of Pan African Resources, warned that escalating environmental laws threatened the stability of the industry.

The 2018 Full Disclosure report from the Centre for Environmental Rights (CER) analyses certain mining companies’ financial disclosures with respect to rehabilitation. One key finding is that the law simply cannot ensure complete financial compliance. ‘The information disclosed by mining companies about the costs of rehabilitation … and about the money that they are obliged to set aside to fix it, is inconsistent, unclear, in some cases unreliable,’ the report states. Some experts say far more detailed information is required to meet the goals of transparency, accountability and trust.

Monitoring and enforcement is also sometimes inadequate. Some permit holders are known to employ various loopholes to avoid compliance. In the worst cases, the mine is simply abandoned, the company goes into liquidation – and what’s left behind becomes the taxpayers’ problem. The DMR was forced to rehabilitate 50 mines during the 2015/16 financial year alone. 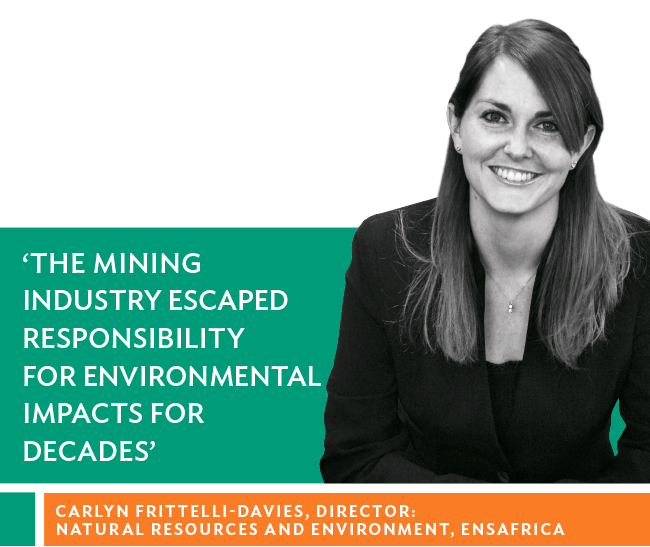 As the CER report states, ‘it is clear from the situation on the ground that rehabilitation is often not happening at all: our landscape is littered with unrehabilitated mines’.

Right now, the entire mining industry – and the environmental lobby – is waiting anxiously for what Pienaar calls the ‘big ticket item’: the new amendments to the Regulations Pertaining to the Financial Provision for Prospecting, Exploration, Mining or Production Operations regulations for mine rehabilitation. Though delayed, it is now hoped that these amendments will be published in early 2019.

In Frittelli-Davies’ view, the proposed amendments, ‘although not perfect, are far more suitable and take into account the needs of the mining industry. The willingness of the DEA to publish regulations which are workable for the industry is refreshing’. According to Rapson, the amendments are one of three risk areas – all related to environmental issues – for the industry in the future. The others are water management (the Department of Water and Sanitation is looking at reducing water allocations for industry); and the carbon tax, also due to come into effect in 2019. ‘These are undoubtedly going to increase liability,’ he says. ‘The question is how much.’

To weather this risky future, what’s required is a major shift in mindset. The industry can no longer think in terms of merely shutting down mines. ‘History has taught us this doesn’t work,’ says Rapson. Instead, rehabilitation needs to be viewed as a progressive process: one that occurs throughout the life of a mine and beyond. Far-sighted mining companies will start to think not of ‘mine closure’ but of ‘asset transformation’ – turning brownfield sites into agri-processing hubs, water treatment plants or renewable energy facilities, he says.

In the meantime, though, Rapson is upbeat about the current legislation’s capacity to improve. ‘There have been hiccups around administration, but these are teething issues, and to be expected.’ Looking at the bigger picture, he says, ‘things are getting better’.