There’s no way to gild this lily. The deeper you dig, the more obvious it becomes: regulatory uncertainty is weighing heavily on SA’s mining sector. The state institutions that should enable a transparent, consistent regulatory framework – notably the national Department of Mineral Resources (DMR) – continue to add ambiguity instead of facilitating investment in mining, according to most analysts.

‘Investors need stable, predictable and competitive regulation and policy to be able to make positive investment decisions,’ says Roger Baxter, CEO of SA’s Chamber of Mines. ‘Finalisation of the MPRDA [Mineral and Petroleum Resources Development Act] Amendment Bill and the contested Mining Charter are imperatives for the industry.’

A spot survey of some of SA’s top legal experts revealed some of the most pressing regulatory uncertainties, which among others include the dispute arising from the amended draft Mining Charter (especially the ‘once empowered, always empowered’ aspect); the amended MPRDA, which insiders say is written in vague language and contains too much discretion for the regulator (particularly relating to Section 11: Transfer of Mining Rights); and the disruptive stoppage orders in terms of the Mine Health and Safety Act (Section 54).

While the list of regulatory uncertainties is extensive, there are numerous ways to iron out these and assist the mining industry in ensuring growth. Both the Mining Phakisa and Mining Industry Growth and Development Employment Task Team were tentative attempts at improving the understanding between regulators, large miners, juniors, labour and other stakeholders – although they have yet to achieve any tangible outcomes.

‘It’s not a happy picture,’ says Peter Leon, partner and Africa co-chair at Herbert Smith Freehills and former chair of the International Bar Association’s mining law committee. He explains that regulatory uncertainty is a worldwide problem and not uniquely South African. ‘But if you look at the regulatory regimes of Chile and Botswana, those are standout examples of jurisdictions that have almost no regulatory uncertainty,’ says Leon.

SA’s lack of policy and regulatory certainty ‘needs to be addressed as a matter of urgency’, according to Nicola Jackson, a partner at Fasken Martineau. ‘This is long overdue and is having a shocking effect on both local and foreign investment in the sector. Investors want regulatory certainty and a clear regulatory framework that is clear, definitive and consistently applied. They need to know the rules of the game. 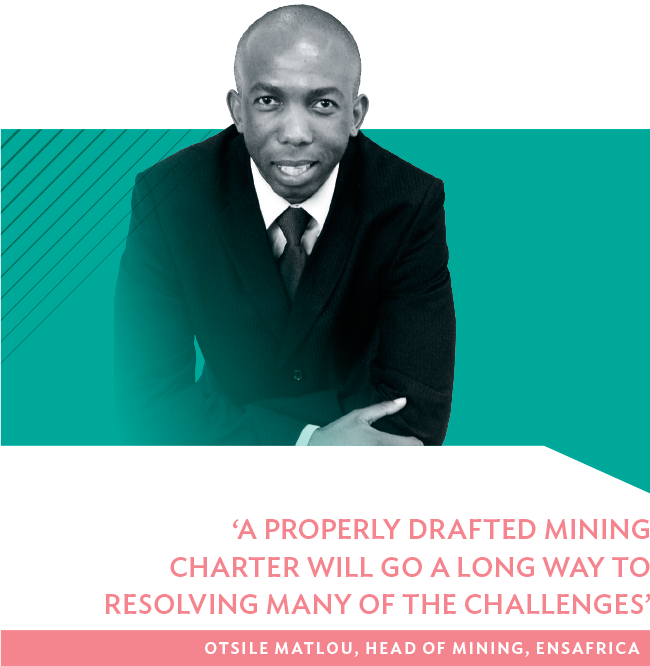 ‘The MPRDA Amendment Bill, 2013, which was passed by the National Assembly on 1 November 2016, and has been referred to the National Council of Provinces for concurrence, seeks among other things, to remove ambiguities in the current bill and improve the regulatory system. However, the slow passage of the bill has further worsened the difficulties in the mining industry. It remains to be seen whether the bill will entrench the necessary certainty in the South African mining industry. There remains policy and regulatory uncertainty despite the efforts to address this.’

Manus Booysen, Webber Wentzel’s head of mining, energy and natural resources, says: ‘It’s really simple. Create clear, unambiguous, precise laws – and ensure that such laws are consistently applied – and a regulatory framework that will promote investment in our mining sector.’

For one, says Booysen, language inconsistencies that don’t capture the intent of the drafters have led to interpretative difficulties. He offers the following examples: ‘The infamous Section 11 of the MPRDA refers to an “interest” in a mining or prospecting right. The term is undefined and the industry’s regulatory lawyers are daily vexed with how to interpret this phrase.

‘Further, the DMR has moved the goalposts mid-game: the 2010 Mining Charter requirements with regard to black economic empowerment are manifestly different from those set out in the 2004 charter.’

The industry urgently requires clarity on the BEE issue, says Giada Masina, a director in Cliffe Dekker Hofmeyr’s mining and minerals practice. ‘The 10-year review of the Mining Charter resulted in much debate, while 2016 has seen a draft reviewed Mining Charter published for comment, a moratorium on what is known as the “trumping provision” contained in BEE legislation and court proceedings regarding the once empowered, always empowered principle,’ she says. 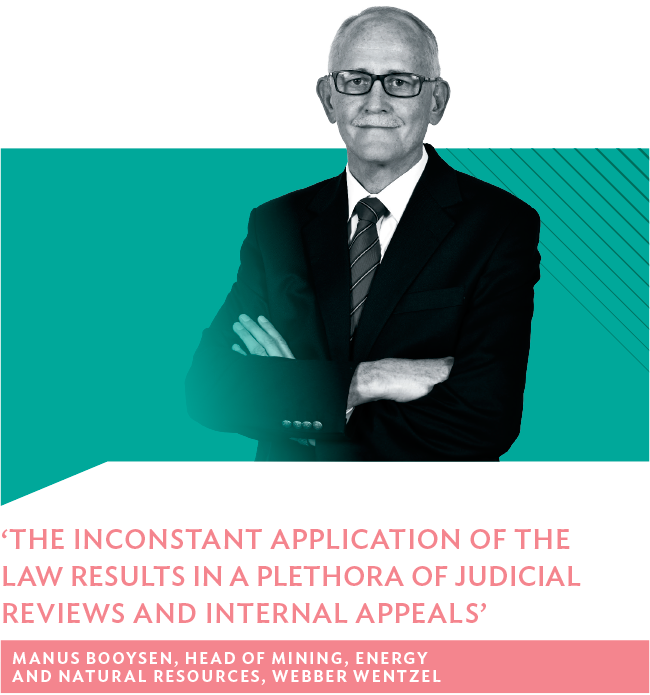 ‘It is clear that mining companies remain committed to transformation of the industry. However, what will be gazetted; whether the targets contained in the anticipated further revised Mining Charter will be achievable by industry players; and whether stakeholders will take any further steps to protect their interests remains to be seen.’

Otsile Matlou, head of mining at ENSafrica, says that by and large the regulatory framework is good, especially in the context of SA’s history, but that investors require certain fundamentals to be in place.

He maintains that most of the uncertainty regarding the Mining Charter and its amended versions stem from the reality that they were drafted as policy documents and therefore lack the precision and detail of statute, even though the DMR enforces them as ‘law’. In addition, he says: ‘Because of the evolving political and policy views, the DMR seeks to make the Mining Charter very elastic, and this offends the rule of law.

This is a sore point for many. Booysen also voices this concern, saying that DMR offices provide vastly differing interpretations of legislative and regulatory provisions. He warns that ‘the inconstant application of the law results in a plethora of judicial reviews and internal appeals, which are costs for both cash-strapped mining companies and the DMR’.

According to Leon: ‘Even if you think you comply with the law, the DMR officials can legitimately hold a different view because of the vagueness of the law. As a result, mining companies end up in a protracted debate regarding whether or not they should be granted a licence.’

The combination of the MPRDA and Mining Charter is ‘pretty adverse’ for the mining industry, he adds. ‘Instead of making it easier for mining companies to comply with the act in terms of black empowerment and socio-economic transformation, it makes it progressively more difficult.

‘The third amendment of the Mining Charter, which [was] due to be published in December, is increasingly more interventionist, and much less of a policy document and much more of a regulatory instrument. This was not the original intention behind the Mining Charter.’

He says the situation is further aggravated by the fact that the original version of the MPRDA never contained adequate timelines for making decisions. ‘There was no obligation for the regulators at the DMR to make decisions within a specified period. In the latest version of the amended MPRDA – which is now before the National Council of Provinces – all timelines have disappeared completely. They are going to be displaced by ministerial regulation, which can change overnight.’

Another regulatory uncertainty relates to stoppage orders issued in line with Section 54 of the Mine Health and Safety Act, which allows the DMR to close down entire mines – as opposed to specific sections – in the event of accidents and other safety breaches.

In November 2016, the Labour Court set aside a mine stoppage order that unjustifiably halted operations at AngloGold Ashanti’s Kopanang mine in the Free State.

Improving regulatory uncertainty will take time and collaborative effort, but there are also easy fixes that could boost transparency in the mining sector almost instantly. One of these is a technical overhaul of the mining cadastre, which is the electronic platform for the application of prospecting rights, mining rights and permits, says Leon.

‘The SA Mineral Resources Administration Online System [SAMRAD] is opaque and difficult to use. I don’t think it’s fit for purpose. We are way behind Mozambique, Botswana and Namibia, to name but a few African mining jurisdictions that have online, real-time mining cadastres.’ Leon suggests an immediate upgrade of SAMRAD.

Meanwhile, Matlou says that a good way to start resolving regulatory uncertainty is to subject the charter to proper draftsmanship. ‘A properly drafted Mining Charter, akin to the Department of Trade and Industry’s Codes of Good Practice, will go a long way to resolving many of the challenges.’