Small businesses are nimble and agile, not bogged down by the paperwork, policies and procurement processes that make large enterprises so slow to react to market changes. And while big businesses are frozen by fears of risk (and the impossible-to-reach targets of the next quarter), SMEs have the freedom to embrace the latest technology, allowing their natural start-up instincts to push them ahead. At least, that’s the theory. The reality, however, is often very different.

According to the SME Survey 2018, when it comes to accounting software, many SMEs prefer to stick with what they know, trying to keep costs down by not investing in new tech innovations. The survey found that 27% of SA’s SMEs are still using Excel spreadsheets for financial data capturing and reporting. ‘The general consensus seems to be that, as long as it is doing the job it is supposed to do, owners are not going to delve too deeply into either what else their accounting package can do, or how it actually does what it does. All they are concerned with, ultimately, is that it is able to assist them with their financials and produce the numbers they need,’ according to Arthur Goldstuck, MD of World Wide Worx and principal researcher for the survey conducted for Xero.

In a statement accompanying the survey, Goldstuck adds that 74% of the SME owners who responded said that they have no plans to change the accounting software they are currently using. (The remaining 26%, he points out, correlates closely with the 27% who’re still using Excel.) ‘This is despite the fact that there are some fantastic new accounting packages available, specifically designed with SMEs in mind – simplifying the usually complex financial aspects of business,’ he says. ‘There is also a corollary to this, namely that as more SMEs adopt such technology, more accountants will follow suit, optimising the more advanced services like tax specialisation and the provision of financial advice.’

On the findings, Maureen Mansour-Khoury, senior product manager of Dynamics 365 at Microsoft MEA, says: ‘South African organisations are aware of the productivity and business intelligence benefits that go along with new technologies, illustrated by the fact that the majority – 70% – of respondents in the study indicated that they were ready to adopt new technologies.’ She adds, however, that while the appetite exists, the survey results show that SMEs prefer to stick with their legacy applications and solutions.

This, she says, can be for any number of reasons – from the familiarity that goes along with using tried and trusted (if outdated) solutions to the reporting challenges involved with obtaining data from various disparate solutions. Mansour-Khoury suggests that those small businesses would benefit from SME-tailored solutions, such as Microsoft Dynamics 365 Business Central, which allows SMEs to congregate all of their business systems and deliver impactful and actionable insights from within familiar Office tools such as Outlook, Word and – of course – Excel. 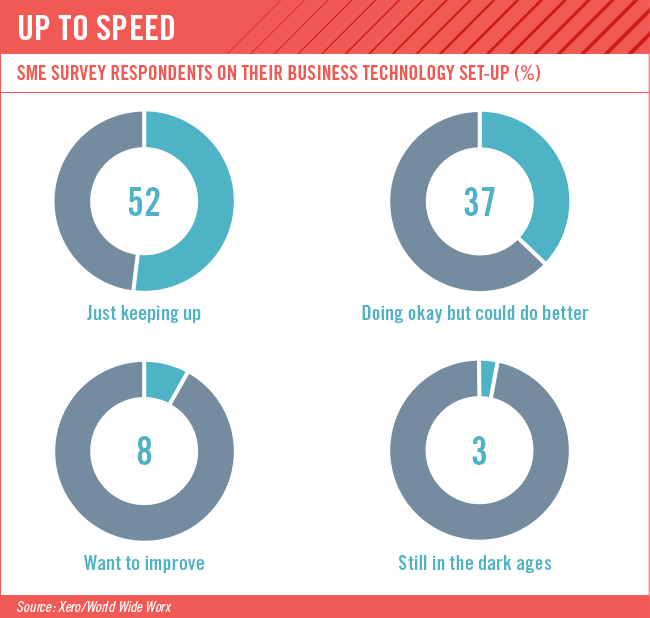 SMEs make up 91% of SA’s formalised business, according to research published by the Banking Association of South Africa. They provide 60% of all jobs and contribute about 34% of GDP. As the backbone of the local economy, SMEs carry a huge collective responsibility – and a wealth of opportunity – when that economy slows down.

‘A start-up built during the tough times is designed from the ground up to be a lean, mean, efficiency machine – whether they’ve bootstrapped or not,’ Kizito Okechukwu, co-chair of Global Entrepreneurship Network (GEN) Africa writes in a recent blog post. ‘These habits should stay with them when the market recovers, giving them higher profit margins since they’ll be able to lift prices once consumers and clients are spending again. If one can build and grow a business when consumer confidence is down and businesses are tightening their belts, then the business will be bulletproof when things improve.’

This growth could be fuelled by the internet of things (IoT). The SME Survey found that, despite the general hesitancy to adopt new technologies, SA’s SMEs are apparently very keen to explore the possibilities of internet-enabled devices and interconnected cloud-based systems. Some 83% of SME decision-makers said they expect to be using IoT in their business within five years. And while the survey asked SMEs about a broad range of emerging technologies – including AI, big data, 3D printing, crowdsourcing, blockchain and virtual reality – only IoT appears likely to have any significant uptake among SMEs in the next few years.

‘SME decision-makers are generally only willing to embrace a new technology if there is a clear business case to do so,’ says Goldstuck. ‘We noted that the uptake of fibre connectivity in preference to ADSL is paralleling that of ADSL’s growth over dial-up in this sector a decade ago. This is clearly due to the obvious benefits fibre delivers to SMEs. It has become obvious over the years that only technologies that directly benefit the SME by helping it to save or make money, or become more efficient will be adopted. IoT clearly fits the bill here.’ Goldstuck adds that many SMEs have already been exposed to the benefits of the IoT in some form or another, thanks to technologies for vehicle tracking and asset management. ‘So they are already aware of its benefits,’ he says. ‘This is the most likely reason SMEs foresee this as an area of major investment in the near future.’

Next on the list, after IoT, were AI and big data – but those were only expected to be adopted by 29% and 27% of SMEs respectively. Goldstuck is not surprised by that finding, given that these technologies are mostly beneficial to businesses with large customer bases or complex logistics. ‘Technology vendors should note that, while 70% of SMEs are ready to embrace new technologies, the only one they really seem enthusiastic about is IoT,’ he says. ‘This demonstrates that, while the willingness is there, they will only embrace something new if it makes sense for their business.’ 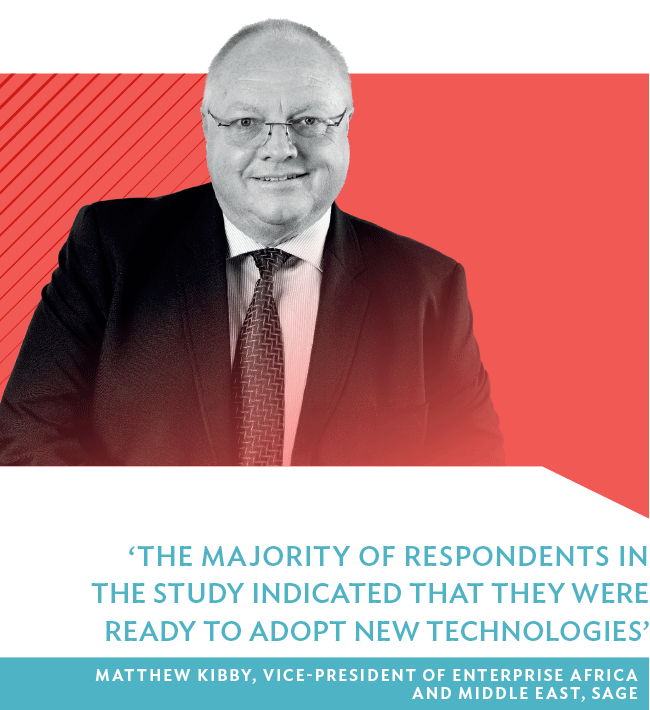 In a recent online opinion piece, Matthew Kibby, vice-president of Enterprise Africa and Middle East at Sage, underlines that point. ‘On the surface, embracing IoT for business transformation seems an obvious strategy for any organisation,’ he writes. ‘However, if an IoT initiative is not properly designed, deployed and supported with the right resources, tools and data, it could introduce significant risk, spanning costs, security, and reputational and regulatory challenges.’

Before embarking on any IoT project, businesses must ask themselves if their infrastructure can cope with its demands. ‘If you’re still operating on legacy infrastructure, the short answer is, probably not,’ he says. ‘Yet, using the IoT to maintain infrastructure is one of the most common and easiest use cases. Construction firms, for example, can save millions using the IoT for proactive machine maintenance, which reduces downtime and unexpected machine failure. IoT platforms must be able to support thousands of vendors, different standards and potentially millions of devices that are constantly sending and receiving information. Legacy infrastructure is not up to this task, and you might need to make additional investments in networking and connectivity.’

Another key consideration is the business’s ability to scale. ‘Once you start realising the business value presented by the IoT, you’ll quickly identify other areas of the business that can be optimised and automated,’ according to Kibby. ‘As a relatively new technology, IoT networks and devices are always improving, so you need to build scalability into your infrastructure that allows you to upgrade as new technology becomes available. Scalability also allows you to expand into new markets and capitalise on new revenue opportunities.’ He cautions that while the business benefits of the IoT are undeniable, without a proper plan to meet a specific goal, costs and complexity can quickly spiral out of control.

That cuts to the heart of the SME owner’s tech challenge. While there’s comfort in old systems, there’s even greater opportunity in new technologies – whether that be AI, VR, cloud or IoT. The question is, when is the right time to take the leap?