A total of R15.5 billion of equity capital was raised in the metals and mining sector to the end of November 2017, versus R9 billion in 2016,  according to Prejelin Naggan, Head of Primary Markets at the JSE. ‘This 72% increase has been driven by mergers and acquisitions activity, and improved fundamentals in the sector.’

Aside from typical listings, the JSE’s fast-track listing process continues to gain popularity. Two mining companies, Orion Minerals and Alphamin Resources, listed on the JSE using this method during 2017.

‘This process allows international companies already listed for 18 months or longer on certain other exchanges to secondary-list on the Main Board or AltX quicker than they normally would,’ he says, adding that these types of fast-track listings save time and costs without compromising any regulatory standards.

The exchange’s special purpose acquisition companies (SPACs) method of listing, whereby a shell is used to raise capital and then acquire assets (effectively, a reverse initial public offering), is also gaining traction. There is interest in the listing of a mining SPAC, and there has been significant interest from operators in the renewable energy and infrastructure sectors. 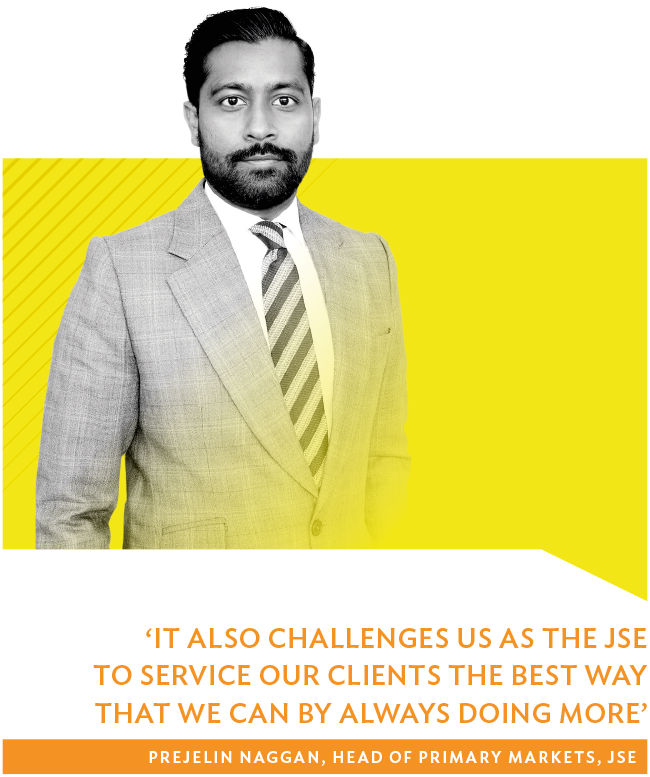 Naggan says the JSE also offers the potential for companies to raise debt capital via a listed debt instrument. And as a further enhancement, the JSE recently launched the green bond segment.

‘This provides companies with an effective tool to raise capital for investments into sustainable projects that would have been funded internally. Issuing a green bond can help companies strengthen their credentials as sustainable and responsible organisations. At the same time, green bonds allow investors to mitigate the effects of climate risk as a part of their investment portfolio, while these bonds also satisfy environment, social and governance requirements and green investment mandates.’

Issuers of green bonds have to disclose the proceeds generated, as well as how these funds are applied throughout the lifetime of the bond. This ensures that the capital raised is applied to the green projects it is earmarked for. The global market for green bonds is valued at approximately $895 billion, with year-on-year issuance doubling in size annually over the past two years.

‘The JSE believes its well-regulated, liquid and transparent platform can provide a home for true green securities,’ he says.

In the mining sector, the JSE has traditionally competed with stock exchanges around the world, including the Australian Securities Exchange as well as the London and Toronto stock exchanges for debt and equity capital raising, says Naggan. ‘The difference now is that we are competing in the local market as well. This opens up the market – it stimulates the economy and breeds excellence.

‘It also challenges us as the JSE to service our clients the best way that we can by always doing more to provide easier and broader access for our clients by investing in faster and more secure technology, and by introducing new instruments and products for investors and members, thereby ensuring that regulation is both appropriate and enabling and brings down costs for our clients.’