Unlike 2020, in which, surprisingly, total estimated CSI spend in SA increased (albeit marginally) from R10.2 billion in 2019 to R10.7 billion, 2021 saw a shrink of 4% in CSI spend: R10.3 billion. That’s according to CSI consultancy Trialogue, which releases its findings annually in its Business in Society Handbook.

One might have expected spend to decrease more dramatically in 2020, rather than 2021. However this may be due to immediate additional CSI budget allocations to mitigate the effects of the pandemic on employees and society’s most vulnerable citizens; while in 2021, the financial toll of the pandemic could be felt more keenly as many companies had shut their doors for good, and others tightened their belts in anticipation of a tough journey back to economic health. CSI spend is most commonly based on a percent of net profit after tax and there is thus a lag between profitability and CSI spend – the impact of falling profits in 2020 was reflected in the 2021 CSI spend.

The mining industry, however, is one sector where CSI spend appears to have increased in 2021. ‘Mining companies in South Africa are generous and intentional with their CSI spend – firstly with regard to what’s required of them through their mandatory social and labour plans [SLPs], but also over and above that,’ says Trialogue director Cathy Duff. ‘In response to the COVID-19 pandemic, many companies increased their CSI spend to provide water and sanitation services, food, programmes to address gender-based violence (GBV), vaccination access and so on, in addition to servicing projects and programmes already in place.

‘Many mining companies are providing basic services and infrastructure – including schools, hospitals, water and sanitation, roads, electricity – which should ideally be the responsibility of local municipalities, with CSI spend focused on human-capital development and sustainable mining communities.’ 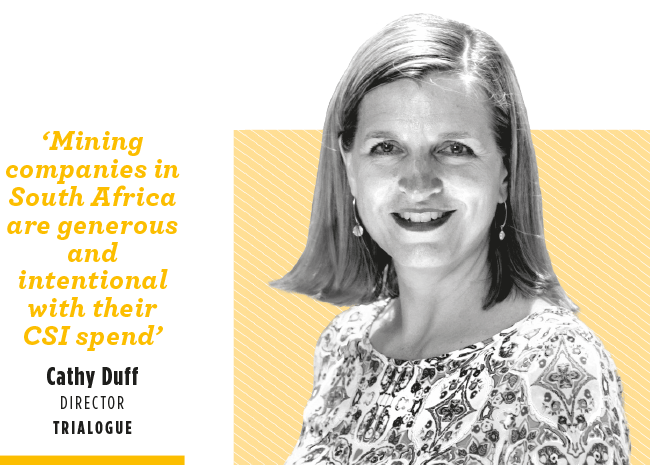 It appears there are no official estimates relating purely to CSI spend in the mining sector, which may contribute to the lamented lack of awareness about the impact that mining CSI has on the communities in which these companies operate. However, there is hardly a shortage of examples, particularly with regard to support provided over and above mining companies’ SLPs in response to the COVID-19 crisis.

According to the Minerals Council South Africa (MCSA), by June 2021, 21 mining occupational health sites had already received the required permits as primary vaccination sites from the Department of Health, and four had begun providing vaccinations in line with the department’s guidelines. ‘The Eastern Cape stands out as a mining-affected province without mines,’ the MCSA states. ‘Currently, around 61 000 mine employees (around 15% of members’ current workforce) originate from the Eastern Cape. It is a province in dire need.

‘It is the poorest province in the country; it suffers from a lack of infrastructure, and is known to be under-resourced in terms of healthcare facilities, supplies and personnel.’

Gold Fields, one of the world’s largest gold-mining firms, headquartered in Johannesburg, has consistently been in the top five of the metals and mining ranking in the Dow Jones Sustainability Index (DJSI) since it started participating in 2011. In 2021, it was again ranked the top SA-listed mining company on the index. Gold Fields was ranked third among 81 mining companies assessed, and second among gold-mining companies. The index scorecard measures ESG-management practices through an annual assessment of more than 1 800 of the world’s largest companies.

‘Our continued strong showing on the DJSI illustrates that we have fully integrated ESG practices into our business,’ says Gold Fields CEO Chris Griffith. ‘Building on our leading commitment to ESG is also one of Gold Fields’ three strategic priorities that is part of the performance scorecards of our management teams. This is critical because we’re no longer only assessed on our operational and financial performance, but that we are doing so responsibly and to the benefit of all our stakeholders.’

‘At a grassroots level, the group supports various NPOs that work to support GBV survivors. Anglo American Platinum extended its focus on gender equality and GBV when it established the Living with Dignity programme in 2019, which aims to eliminate GBV and was piloted in-house, after baseline studies identified the extent of GBV within the group,’ it adds.

‘Living with Dignity was incorporated into the group’s WeCare initiative, launched at the start of the pandemic in 2020. WeCare focuses on protecting the lives and livelihoods of stakeholders that exist at different elements of the organisation’s value chain through the provision of support in four areas: physical health, mental well-being, community response (including food security), and the Living with Dignity initiative.’

By the end of November 2021, 20 victim-empowerment centres and shelters had been refurbished and handed over to the areas of Polokwane, Twickenham, Der Brochen, Mogalakwena, Amandelbult and Rustenburg. 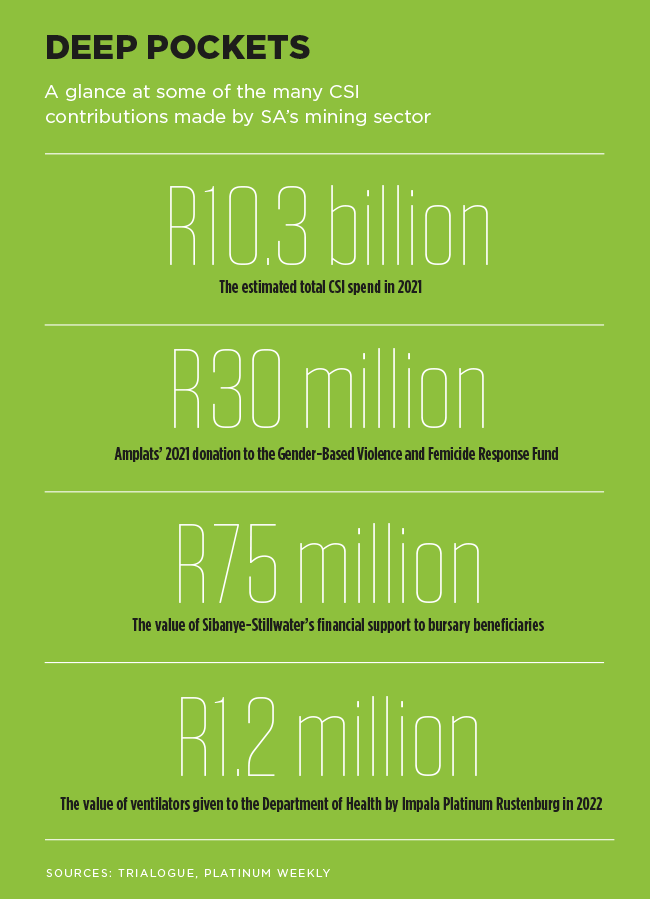 Amplats has also sought to address the root cause of GBV through interfaith healers in communities. In 2016, the Mapela Faith Group, comprising pastors from different denominations, was set up. Interfaith leaders established home and victim-empowerment site gardens where survivors can grow produce to ensure food security, while sewing and knitting projects give survivors a way to learn skills and earn an income. The group has also donated R30 million to the Gender-Based Violence and Femicide Response Fund, launched in February 2021.

The CSI achievements of Sibanye-Stillwater, the world’s largest primary producer of platinum, second-largest primary producer of palladium and third-largest producer of gold, are also presented in the Trialogue handbook. Through bursaries, the group has enabled 1 493 learners to pursue careers in fields of study such as mining, engineering, finance and human resources through its bursary scheme, and provided around R75 million in financial support. In 2020, 479 learners participated in the programme.

Sibanye-Stillwater’s standard internship programme supports 225 interns and, in 2020, 1 273 trainees participated in the group’s learnership programme, which aims to provide skills in the mining sector and increase the employability of young people by providing them with relevant work experience.

A total of 508 placements have been allocated for the group’s 2021 Cadetship programme for young, unemployed members of communities around its operations, to help them acquire the basic skills required for entry-level job categories of mining and metallurgy. The group has also set up a portable skills programme for retired or incapacitated employees, and an adult education and training programme.

According to Pan African Resources, one of its community health infrastructure projects saw Barberton Mines hand over a new Renee Clinic facility (built and equipped at a cost of R14 million) for the benefit of the community in the Emjindini Trust area, to the Department of Health in 2018. Barberton Mines’ new SLP also included the construction of the R15.3 million Cathyville Clinic in Emjindini Ext 13, where construction commenced during 2020 and, despite delays due to the pandemic, opened in August 2021.

Accountability in some parts of the sector still needs to be addressed, but it is heartening to see that many companies take it upon themselves to contribute over and above their SLP obligations.

As Duff puts it, ‘if one takes a step back to look at the sector overall, there is a real desire to co-ordinate efforts to uplift communities in meaningful and lasting ways’.