It’s no secret that large inequalities exist in the distribution of resources between the public and the private healthcare sectors in SA. According to the 2018 Presidential Health Summit report, there are 813 acute-care hospitals in service: 404 in the public sector and 409 in the private sector. However, the latter are generally well-resourced and well-equipped, while state facilities tend to be over-crowded and understaffed.

The private sector, funded by contributions to medical schemes, is far better resourced than the government-funded public sector. For example, a recent Econex study for the Hospital Association of SA found that while 92 GPs are available per 100 000 patients in the private sector, there are only 25 GPs that can attend to every 100 000 people in the public sector.

Alex van den Heever, a health economist at Wits University, told News24 that one of the health system’s vulnerabilities is its number of critical care beds.

Last year’s annual Hospital Association of South Africa conference revealed that of the 32 000 doctors registered with the Health Professions Council of South Africa, 12 000 were specialists; 8 000 of them work in the private sector and just 4 000 in the over burdened public sector.

In the height of a runaway pandemic such as COVID-19, discrepancies between the private and public healthcare systems are thrown into even sharper relief – and the need to pool expertise and resources in order to fight and contain the virus becomes key. There is currently no cure, and treatment for patients who are struggling to breathe from this respiratory disease includes assisted breathing equipment, oxygen or ventilators.

SA demonstrated one of the speediest and most forceful responses to this respiratory disease that has caused hundreds of thousands of deaths worldwide. On 15 March 2020, the country’s National Disaster Management Centre classified the COVID-19 pandemic as a national disaster, and a number of regulations in terms of the Disaster Management Act were implemented shortly afterwards. Although these measures bought much-needed time for the healthcare system to prepare itself as adequately as possible for the onslaught, it’s unclear whether these initiatives – which included identifying field-hospital sites, such as stadiums, convention centres and military facilities – will be enough to cope with the large numbers of people who will require hospitalisation and access to medical ventilators.

Provinces are expected to peak at different times, with varying levels of infection and deaths, but the national peak infection rate is expected sometime in August.

‘The gravity of the unprecedented challenge that the COVID-19 pandemic presents to our country and its people makes it imperative to have a unified approach to fighting the spread of the disease, and for collaboration between the Department of Health and the public and private health sectors,’ says Melanie da Costa, director of strategy and health policy at private healthcare group Netcare.

‘Structures such as BUSA [Business Unity South Africa], for example, at which Netcare was represented, engaged with the Minister of Health, NICD [National Institute for Communicable Diseases] and other key stakeholders early on to offer tangible support for the fight against COVID-19.

‘Netcare also continues to co-operate closely with the Department of Health and the NICD, and knowledge is shared widely between the public and private sectors on an ongoing basis to ensure a co-ordinated response to this unprecedented health threat.’ 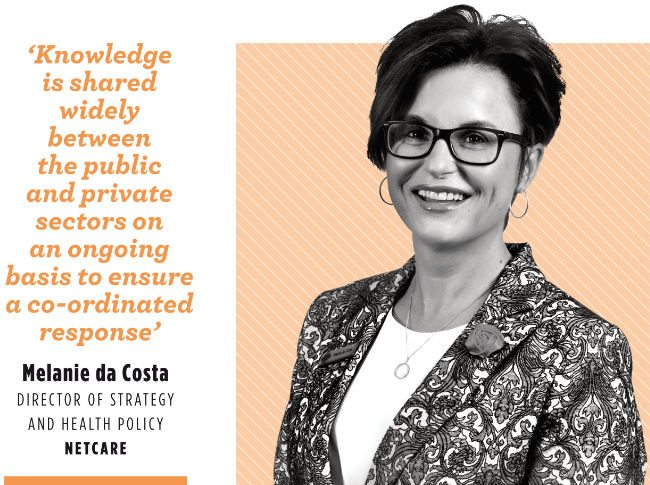 Cape Town is already running out of hospital beds. According to media reports, the number of COVID-19 patients at Groote Schuur Hospital is doubling about every five days, and the intensive care units at Mitchells Plain Hospital and Tygerberg Hospital are already full. Based on current resource levels, model projections indicate that the number of available hospital and ICU beds will likely be exhausted long before the peak demand.

The South African COVID-19 Modelling Consortium (SACMC) estimates that the cost of equipment such as ventilators, masks and oxygen as well as the staff needed to respond to the COVID-19 epidemic will hover between the R26 billion and R32 billion mark. In addition, the SACMC (which includes key experts from several university-based institutions) predicts a need for 75 000 to 90 000 general hospital beds and 20 000 to 35 000 ICU beds between June and November to cope with the expected peak in cases. But with just 3 300 ICU beds available in total in the public and private sector combined across SA, even the best-case scenario is likely to overwhelm the country’s ICUs.

According to health economist Gesine Meyer-Rath from Wits’ Health Economics and Epidemiology Research Office, two-thirds of the country’s ICU beds are in the private sector. Meanwhile, Liza Eustace, healthcare sector head at Absa Corporate and Investment Banking, told Business Day earlier this year that the public sector has about 1 000 ventilators while the private sector has almost 2 000.

Expectations are that thousands more ventilators will be required for the surge – meaning the balance will need to be sourced. The US is donating up to 1 000, while the National Ventilator Project, a Department of Trade and Industry initiative, aims to produce a minimum of 10 000 simple, non-invasive ventilators locally to help close the gap.

Co-operation between state and private healthcare players is crucial to ensure a co-ordinated response to this unprecedented health threat. At the time of going to press, ongoing talks between the two sectors had not yet resulted in a firm agreement.

In an issued statement, Mediclinic confirmed its general acceptance of the proposed National Department of Health pricing relating to hospital services, which aligns with its position of not seeking to make a profit on the treatment of public-sector patients. The release further states that the hospital group is engaging with various provincial departments of health to reach agreements regarding the referral of COVID-19 patients to its facilities, where volumes require their support during this pandemic. 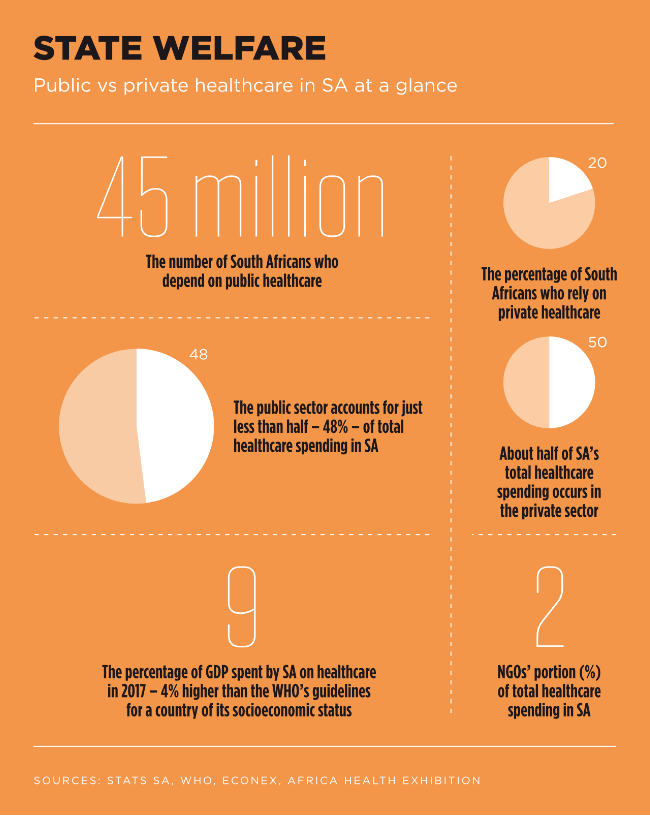 It’s important to note that for private hospital groups, collaborating with the public sector is nothing new. For more than a decade, Mediclinic has worked with various health departments across the country by performing more than 300 operations on patients awaiting surgery in many of the busiest public-sector hospitals.

The principle behind this initiative is that Mediclinic can relieve the pressure on key waiting lists by providing spare theatre capacity and nursing care while doctors practising in the hospitals provide their expertise in surgery or anaesthesia.

Between September and December 2017, the first round of private-public initiative procedures was carried out at four Mediclinic hospitals in the Western Cape, either by doctors associated with Mediclinic or from the public sector. Operations included cataract, urology and tympanoplasty (eardrum repair) procedures. The Welkom cataract surgeries marked the programme’s extension to the Free State.

Mediclinic is not the only privately funded hospital group to offer pro-bono surgeries and theatre time to state patients.

For many years, the Netcare Foundation, a registered public-benefit organisation formed by the privately funded Netcare healthcare group, has provided access to life-changing medical procedures to needy patients, including craniofacial procedures, surgical correction of cleft lip and palate, cochlear implants and cataract surgery.

Nivesh Sewlall, a specialist physician at Mediclinic Morningside, agrees that SA’s healthcare system needs a continued private and public partnership during and after the COVID-19 pandemic.

‘We already do this via sharing skills, ideas, resources and skillsets,’ he says. ‘It’s essential to share knowledge and resources – but it’s also important to note that our collaboration with the state goes beyond this pandemic and isn’t suddenly being manufactured. For decades, government and private healthcare workers have shared information about niche and rare procedures and skills – we operate as one community, attend the same conferences and have access to the same local and international journals. For COVID19, we created an informal WhatsApp group for ICU specialists and within 48 hours we had 160 members across both sectors, sharing information.

‘This is just one example of real-time, immediate and effective collaboration that costs absolutely nothing.’ In addition, hospital groups, medical aid companies and pharmaceutical businesses have hosted daily virtual webinars for the medical fraternity to exchange information and stay abreast of new discoveries related to the COVID-19 pandemic.

The virus crisis hit SA just as lawmakers were preparing to finalise the controversial NHI Bill, which promises universal healthcare to all South Africans. While the pandemic has put the brakes on this flagship piece of proposed legislation, some suggest that tariff negotiations between the state and private healthcare organisations might pave the way for how NHI might work in the future.