The MV Mafuta is about as far away as you can get from SA’s deep mines. Owned by De Beers and operated by Debmarine Namibia, it’s the world’s largest offshore diamond-mining vessel, operating up to 150 km off the Namibian coastline in the waters north of Alexander Bay. Yet while its crew works in dramatically different conditions to their land-based mining peers – in cold Atlantic waters, as opposed to hard-rock gold or platinum mines – they share many of the same challenges.

‘Debmarine Namibia has a very clear aim of “zero harm” across all our operations, and we are constantly looking at ways of enhancing employee safety, and especially around the heavy machinery required for diamond recovery operations,’ according to Gerhardus Theron, vessel manager of the MV Mafuta.

To that end, De Beers Marine South Africa partnered with Orange Business Services to instal and test a customised IoT solution to maintain safe working distances for the MV Mafuta’s crew around the heavy machinery used in marine diamond-mining operations.

In the pilot project, Orange Business Services used technologies such as Bluetooth Low Energy locators and wearable sensors, integrated with on-board antennas and a software engine, to create virtual boundaries (or geofences) around a specific part of the vessel. They imported the MV Mafuta’s AutoCAD files and used those to map antenna locations for the geofence. Ten crew members were then equipped with wrist sensors, and whenever one of them breached the geofence, the ship’s bridge was alerted immediately. 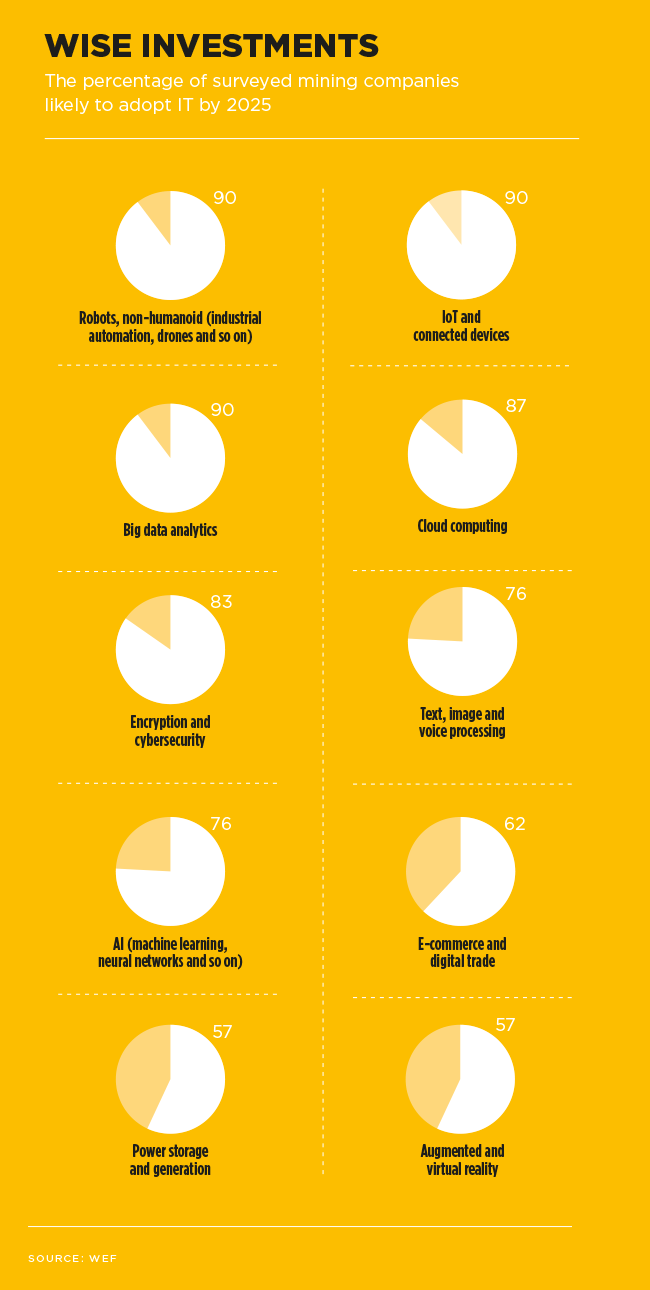 ‘This smart IoT solution, developed with De Beers, is a great example of innovating and co-creating with our customer,’ Keith Matthews, Orange Business Services’ country manager for SA, said after the project. ‘The geofencing pilot has already proved successful in one of the most challenging heavy-industrial environments: a floating diamond mine at sea, with prolonged exposure to strong vibration and corrosive salt water. The next phase of its development will aim to refine the interface and data-collection capabilities, and include testing a trigger function to deactivate machinery in the event of a breach of the geofence by a crew member.’

The project is a textbook example of how virtual technologies are enabling mineworkers and machines to work alongside each other safely. After all, that’s what the future of mining – on sea, on land, underground, or even in outer space – will look like.

The notion of using robots, smart systems and automated processes to enhance operations at risky working sites is nothing new. In a widely quoted interview with Digital Trends in 2017, Zachary Podkaminer of Construction Robotics described how his company’s SAM100 (semi-automated mason) system was revolutionising construction sites. While a typical human bricklayer averages about 500 bricks per day, SAM100 uses a conveyor belt, robotic arm and concrete pump to assist in elevating that number to 3 000 bricks per day. For Podkaminer, it wasn’t a case of the robot replacing the human crew but, rather, working alongside them.

‘We don’t see construction sites being fully automated for decades, if not centuries,’ he said. ‘This is about collaboration between human workers and machines. What SAM does is pick up the bricks, puts mortar on them and puts them on the wall. It still requires a mason to work alongside it. SAM’s just there to do the heavy lifting.’

And heavy lifting is exactly what’s needed as miners seek ways to access deeper mineral bodies, safely and more cost-effectively. After all, mining remains a high-risk business – and those risks only increase the deeper you dig.

In a statement released by Huawei, Zhao Cunhui, GM of Chinese mining consultancy Jingying Shuzhi, outlines the three key risk factors in coal production as ‘the unsafe behaviour of people, the unsafe conditions of things and unsafe factors of management’. He points to people as being the biggest safety hazard, highlighting risks such as poor worker discipline and a lack of overt supervision, which he said leads to violations such as riding belts, running after chair lifts, carrying unregulated items, smoking and not wearing helmets. A lack of automation only compounds that risk by creating monitoring blind spots; while a lack of smart AI makes it difficult to determine whether a workspace is safe, identify worker violations or analyse the status of machinery. As Cunhui puts it, ‘AI excels at repetitive work, freeing people from traditional labour. But for safe production in coal mines, AI is desperately needed to expand the scope of automation and the depth of smart capabilities’.

Huawei’s Mine Brain solution aims to boost mine safety by optimising workplace and supervisory efficiency, by replacing humans in hazardous environments and performing repetitive tasks. The system’s vision capabilities can report unsafe behaviour (for example, people working in front of shearers, or missing hydraulic support guard plates) to the on-site monitoring system, which can then issue warnings; and can protect mineworkers by identifying changes in the state of workplace objects and the environment.

‘Computer vision means that safety management doesn’t have to rely on humans,’ says Cunhui. ‘By identifying conditions such as belt no-loads, coal piling on belts and belt deviation, remote alerts or messages can be issued to the belt control system for a co-ordinated shutdown. Mine Brain helps us identify whether the pump house inspection is on time, improve people management, provide on-site prompts and generate inspection reports. It can also identify the absence of management in the dispatch room and generate software records and reports for daily assessment.’

Systems such as Mine Brain are enabled by wireless underground networks that link to moving devices via seamless roaming connectivity. In July 2021 Ulrich Graf, senior engineer of Industry 4.0 and industrial IoT at Huawei’s German Research Centre, described the technology at a summit under the theme of how ICT tech innovation brings digital transformation to the mining industry.

‘We use the latest and greatest in WiFi 5 and WiFi 6 coverage to connect all the remote units, along with smart antennas, RJ45 ethernet cables and power over ethernet,’ he said. ‘We also have other technologies that could be put into the access points, like Bluetooth or IoT extendable tech such as Zigbee and RFID. This means seamless roaming connectivity for underground moving devices, 3D simulation that resolves coverage hole problems, flexible deployment, and wireless coverage for the underground mine, with over 20% improvements in overall coverage.’ 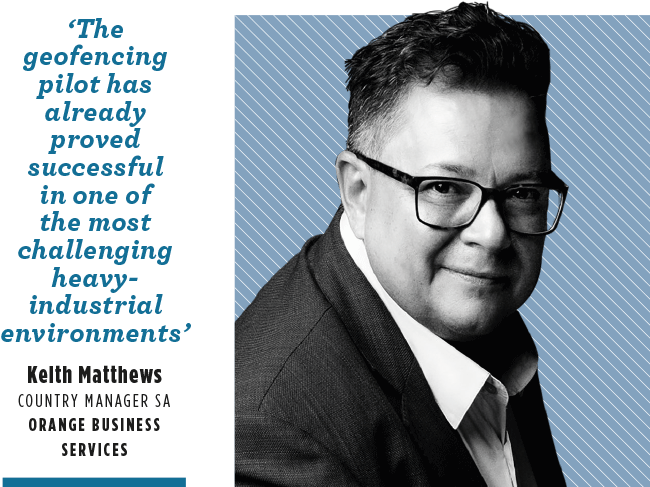 Closer and more accurate monitoring also helps ensure that machinery remains in good working order. ‘Machines can now tell you when they aren’t feeling well,’ a McKinsey & Co report points out. ‘The challenge for today’s industrial players lies in applying advanced predictive maintenance (PdM) technologies across the full scope of their operations.’

PdM enables businesses to predict failures long before they happen, thereby avoiding downtime, increasing uptime and cutting both preventative and corrective maintenance costs. However, according to the report, ‘while many companies have launched isolated pilots, few have been able to deploy PdM at scale across their operations. We believe the time has come for more organisations to move towards higher levels of PdM maturity’.

Fast, smart, hyper-connected IoT technology – the type that Graf described – is a giant step towards that, as it enables in situ application of safety and maintenance tasks. In SA, for example, Anglo American has initiated a project to manufacture spare parts locally for its mining and processing equipment using 3D printing. The ultimate aim of the project, which Anglo American launched in partnership with the CSIR and US-based tech firm Ivaldi Group, is for the miner’s inventory of spare parts – including pump impellers, shaft sleeves, gasket bonnet valves and mining rock-drill bits – to be stored digitally and 3D printed locally.

The technology already exists that would allow smart monitoring and predict when a machine, deep underground, has a part that will need replacing, and for a connected system of devices to enable that part to be printed, produced and procured on or near the mine site within minutes. 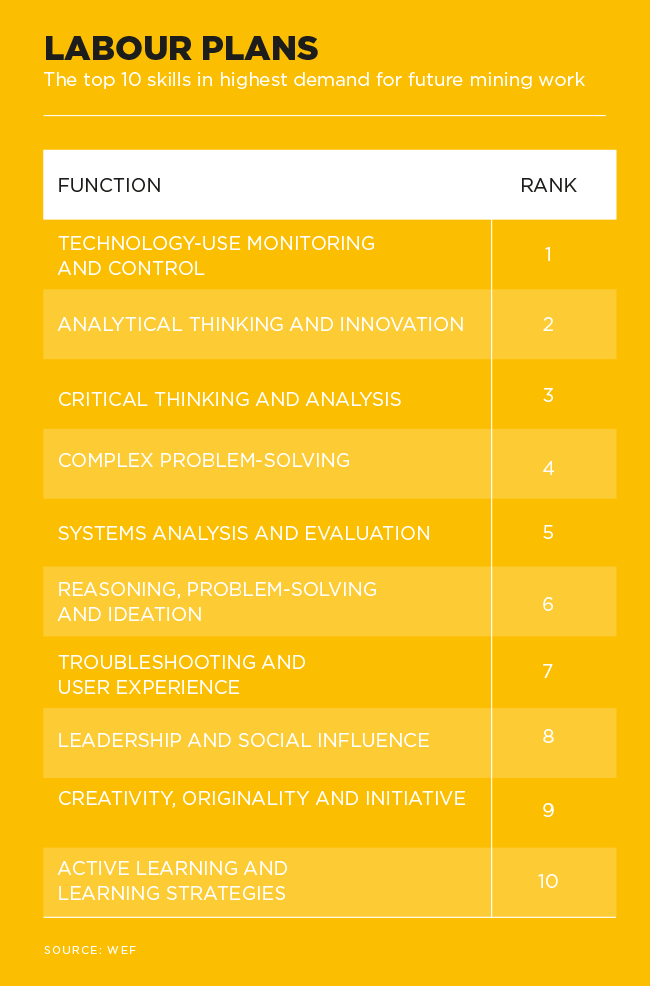 Of course, not all mining challenges have such (theoretically) simple answers. A paper published by the International Institute for Sustainable Development sums up the complexity of the challenge. ‘Constant innovation in processes is necessary to overcome natural factors such as declining reserves, lower ore grades, deeper deposits, and geotechnical difficulties due to harder rocks, among others,’ the report authors wrote. ‘In short, innovation is critical for the continuity and sustainability of mining activities.’

Underground hard-rock mining accounts for about 40% of mining operations worldwide, but just 12% of run-of-mine production. ‘Underground mines also tend to be more targeted, more costly and less productive than open-pit mines,’ according to McKinsey & Co’s analysis.

‘Because the choice of which underground method to deploy is predominantly driven by the geology of the deposit being mined, the operator has little flexibility in choosing the mining method, given that the objective is to maximise net asset value over the life of the mine. But given the inherent complexity in underground mining, we frequently uncover improvement opportunities in both productivity and cost.’

The deeper you go, the more difficult mineral extraction becomes. As miners continue to stretch the boundaries of their exploration and extraction, they’ll need better – and smarter – technologies to make that possible.