What goes up must come down. But for the time being, SA’s mining sector is riding high on the global commodity boom and basking in its role as knight in shining armour for the highly indebted government. In a nod to SA’s heritage as a country built on the extraction of minerals, the mining industry has risen into a leadership position once more – driving the national pandemic recovery with its financial support of the bruised economy as well as its proactive COVID-19 awareness, testing and vaccination programmes.

More than 337 700 of the 450 000 mining employees and contractors in SA were partially or fully vaccinated against the disease by mid-March 2022, according to the Minerals Council South Africa (MCSA). Equally impressive, the COVID testing rate of 81.87% in the mining sector is more than double the national average of 38.65%.

‘The mining contribution to the SA economy is significant, with mining growing by 11.8% for 2021 and representing 7.7% of the nominal GDP,’ says Andries Rossouw, energy, utilities and resources leader at PwC Africa. ‘Mining represents more than 60% of exports and was largely responsible for the surplus on the balance of payments. Mining corporate income is praised for supporting the growth in corporate tax income – mining royalty income for the state grew from R14.2 billion in 2020/21 to R28 billion in the 2021/22 financial year.’

According to PwC’s SA Mine 2021 report, the aggregate tax expense for mining companies in SA is R91 billion with an effective tax rate of 26%, which represents ‘a staggering 250% increase from the previous period’.

According to Charles Young, head of mining and a partner in Bowmans’ M&A team, SA’s mining industry ‘also continues to attract significant inward foreign investment, with overseas investors continuing to invest in the development of South African mining operations’. He adds that recent strategic investments and other M&A activity have focused often on PGMs, gold, chrome and manganese, with continued strong demand for investment in battery metals.

Finance Minister Enoch Godongwana also highlighted the sector’s huge fiscal contribution in his Budget Speech, calling it a ‘positive surprise’. He cautioned, however, that no permanent expenditure (to ease the country’s mounting debt) could be planned on the back of this, as the mining windfall didn’t reflect an improvement in economic capacity but is based on short-term increases in commodity prices. ‘One swallow does not a summer make,’ he added. 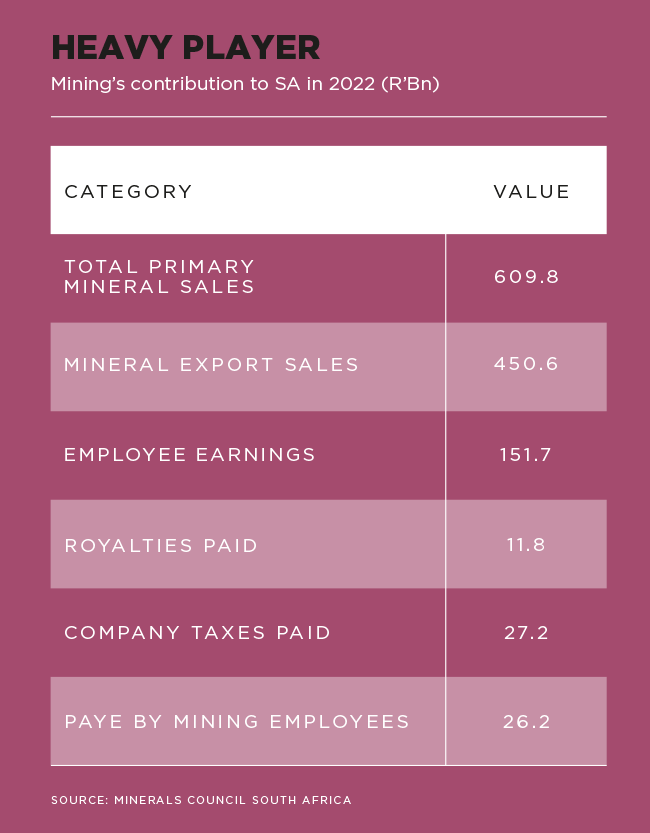 The MCSA lauded the minister’s ‘pragmatic’ and ‘sobering’ assessment of the critical role mining plays in the SA economy. ‘It was notable that he acknowledged that the broader economy is not doing well and that it was really only mining that performed during 2021,’ according to Henk Langenhoven, MCSA chief economist. ‘Minister Godongwana painted a very realistic picture of mining production and the negative impacts of rising input costs, electricity shortages, inadequate rail availability and regulatory uncertainty would have by moderating the mining sector’s recovery from two years of the COVID-19 pandemic.’

After two disruptive years, SA mining is benefiting from the surging demand for platinum group metals (PGM), iron ore, coal, aluminium, gold and various other commodities. There are numerous reasons for this demand – not only are the global metal inventories down and there is a backlog of orders after pandemic-induced lockdowns and supply-chain disruptions, but there is also the low-carbon energy transition with its growing need for copper and battery metals.

‘Analysts have stated that total world copper mine production growth could surge to 7% in 2022 from just 2% in 2021,’ says Tawanda Madondo, principal resources and energy at Absa Corporate and Investment Banking.

‘There are considerable opportunities for SA in the battery-storage value chain. Almost all of the high-demand battery minerals are found in abundance in Southern Africa; the region dominates both current supply and known reserves. Therefore, SA mining will continue benefiting from the surging commodities demand.’

On top of this, the war in Ukraine and the resultant sanctions against Russia, one of the world’s largest gold and platinum producers, are driving up commodity prices further. Gold as a safe-haven asset broke $2 000 per oz in early March. Bloomberg reported that bullion gained 12% in 2022, closing in on a record as investors were seeking a store of value amid the looming inflationary shock.

‘At present, the most significant impact for SA is in the PGM space, where prices have already started to increase, with platinum above $1 150/oz, palladium above $3 000/oz and rhodium above $22 000/oz again,’ said Rossouw, a week after Russia invaded its neighbour. ‘Nickel, as a by-product for our PGM producers, stopped trading on the London Metal Exchange as it reached $100 000 a ton.’

The geopolitical troubles are also pushing up the scramble for thermal coal, as the EU is turning away from Russia for its fossil fuel needs. Mxolisi Mgojo, Exxaro’s outgoing CEO, said at his recent results presentation that the company will be able to supply some of the high-quality coal that the EU requires, but the issue is getting it there. Lack of capacity at Transnet Freight Rail continues to stifle SA coal exports, seeing as the state-owned rail company can’t transport the necessary volumes to the Richards Bay coal terminal. Despite such infrastructure challenges (which, in addition to logistics problems, include electricity and water constraints), the SA mining sector has demonstrated remarkable resilience and agility – which, according to Sietse van der Woude, senior executive of modernisation and safety at the MCSA, is especially visible in its innovative pandemic response. ‘This included the rapid repurposing of existing data and other technologies to inform quarantine, exposure and vaccination programmes, such as using real-time health and GIS technology to inform planning decisions,’ he says.

‘Mines also implemented numerous technologies and innovation in their operations to maintain operational capacity – in some cases, reducing delays in screening by 90% to ensure that workers could remain safe and healthy under the circumstances.’

The MCSA champions modernisation as a means to extend the life of mines, and warns that without it, 200 000 jobs could be lost. In October 2021, a milestone was reached with the launch of the Organised Labour Consultative (OLC) Forum at the Mandela Mining Precinct (MMP) – a partnership between the MCSA and the Department of Science and Innovation to revitalise mining research, development and innovation.

‘We are incredibly pleased that five trade unions – AMCU, NUM, NUMSA, Solidarity and UASA – have agreed to come on-board,’ says Van der Woude. ‘This is historic in that it is the first time that organised labour, as a critical stakeholder in the modernisation journey, will actively participate in research, development and innovation initiatives in SA.’ 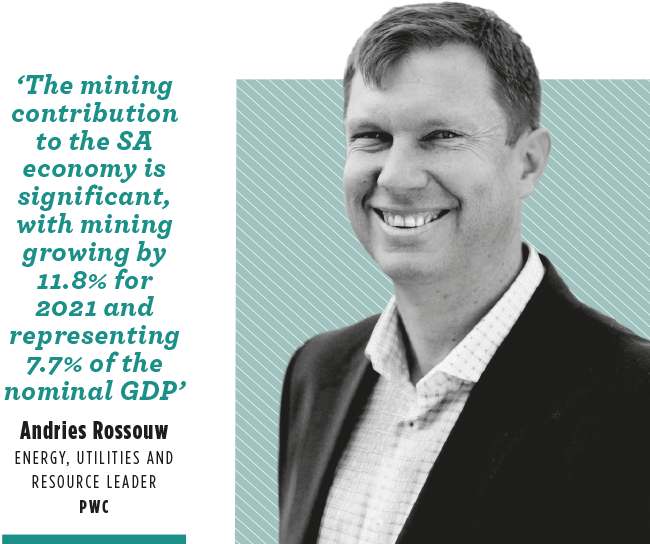 The unions represent the most vulnerable among the employees in the industry, therefore it’s crucial to include their perspective and have their buy-in. ‘Getting stakeholders on board, taking them along and working collaboratively with them on the modernisation journey is groundbreaking in itself, as in the mining-industry stakeholders often view industry initiatives with suspicion. This collaboration with trade unions is key for the success of mining modernisation,’ says Sherin Ramparsad, MMP programme manager for the successful application of technology centred around people.

The OLC Forum’s first consultation session successfully took place in February 2022, and a second will follow later in the year. ‘The session allowed the sharing of the strategy and business plan, as well as projects completed and those under way regarding mining modernisation, including both technical and people-focus areas,’ says Ramparsad. ‘Unions are being invited to participate in workshops, underground trials and technology demonstrations around modernisation for immersive experiences, and to take them, as key stakeholders, along on the modernisation journey.’

The premise of this journey is that technology is an enabler for people and cannot replace human abilities – such as making complex decisions, applying judgement, developing creative solutions to problems, and providing leadership and support to others. ‘The pandemic reinforced the idea that technology and innovation can help enhance and augment human activities. For example, by giving us better information about the mining environment; by making entry and exit to mining areas safer for people to do inspections; or by reducing environmental impact through cleaner technologies,’ says Van der Woude.

‘As these modernisation efforts enhance our abilities to do things that only people can do, this gives us the opportunity to more closely align the skills profiles of the future mining workforce with the future needs of society, whether around digital or digitally aligned skills, environmental performance, health and safety. It’ll require that we help our workforce to move from the current “traditional” skills to ones that are in demand in the future.’

However, it’s clear that in the short term, modernisation will cause job losses, especially in lower-skilled positions, leaving many retrenched employees and their communities in extreme poverty. This is likely to add to the problem of illegal mining, as most of the illegal miners (known as zama zamas) are former mineworkers who use their industry skills and knowledge. Gold is the primary target, according to Sibanye-Stillwater, but illegal miners also access remote underground PGM concessions to steal copper cable. Most of SA’s illegal mining is linked to organised crime exploiting high-value minerals, according to the MCSA, costing around an estimated R7 billion in lost revenue annually.

To curb illegal mining, it’s crucial to step up law enforcement and legislation (such as the planned Artisanal and Small-Scale Mining Policy), as well as to develop an alternative economy alongside that of the mine to provide non-mining-related livelihoods.

Many mining companies already have such programmes in place as part of their social and labour plans (SLPs), which legally require them to uplift their host and labour-sending communities. Unfortunately, however, the majority of these are not achieving the desired outcomes. A 2022 report by Amnesty International questions the efficacy of the SLPs, finding that they are generally badly drafted, according to Merlita Kennedy, partner at Webber Wentzel. She explained in a recent webinar that the ‘tumultuous’ and ‘volatile’ relationship between mining companies and communities often finds its way into court. SA communities are increasingly protesting against mining companies, with the number of class action lawsuits rising.

Companies also need to move beyond treating ESG as a tick-box exercise. ‘ESG is critical for sustainability in mining,’ says Young. ‘In practical terms, this includes implementing and following proper governance structures and transparent processes, and ensuring effective engagement with stakeholders.’

This will not only mitigate the risk of future lawsuits and unrest, but also strengthen the mining industry’s resilience when the commodity boom wears off.