In mid-June, the Western Cape’s provincial health department was advertising for more than 4 000 additional doctors and nurses to prepare for the COVID-19 surge. The pandemic has aggravated the shortage of health professionals in SA that has been crippling the public health sector for decades. As far as possible, health-science faculties and nursing colleges have resorted to online teaching to continue producing the next generation of health professionals during the crisis.

The situation is similar at the country’s remaining medical schools: the universities of Pretoria, Free State, KwaZulu-Natal and Limpopo, as well as Walter Sisulu University and Sefako Makgatho Health Sciences University (formerly known as Medunsa).

Several other tertiary institutions, including some universities of technology, have thriving health-science faculties. Yet only those that train doctors – in other words, offer the flagship MBChB programme – are considered ‘medical schools’ or ‘schools of medicine’.

Nelson Mandela University (NMU) in Port Elizabeth is about to boost its health-science faculty by opening SA’s 10th medical school. ‘We had hoped to have our accreditation from the Health Professions Council of South Africa [HPCSA] and the Council on Higher Education [CHE] by now, but the coronavirus has caused delays,’ says Lungile Pepeta, executive dean of health sciences at NMU, who is also a well-known paediatric cardiologist.

‘We are ready,’ he said in June. Key staff members have been recruited and lecture halls, laboratories and offices have been revamped at the Missionvale campus, which is opposite Dora Nginza hospital – one of the sites where students will rotate for their clinical training. 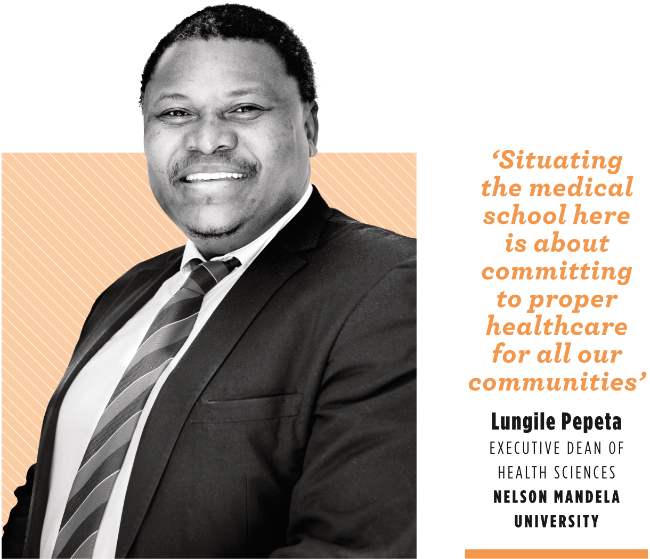 ‘The campus was originally part of the old Vista University, built for black people during the apartheid years. Situating the medical school here is about committing to proper healthcare for all our communities, and contributing to urban renewal and development,’ according to Pepeta.

The professor explains the school’s intention to develop ‘comprehensive general family physicians, appropriately trained both for SA’s medical and health needs and in how to best serve diverse communities’ – inspired by the Cuban model, where 80% of practitioners are comprehensive family physicians, and only 20% are specialists in other medical fields.

‘Sixty percent of spaces are reserved for matriculants from quintile 1 to 3 schools, which include non-fee-paying schools.’ Graduates will be encouraged to return to their communities to serve as doctors.

Further inland, North-West University (NWU) is also looking into establishing its own school of medicine to train much-needed doctors for the province. The university submitted its business plan and financial model a few years ago. More recently, it appointed a medical school committee that includes members from Sefako Makgatho and Wits medical schools as well as the provincial health department. However, NWU corporate communication director Louis Jacobs says that for now the medical school remains ‘future music’.

This sentiment is echoed by STADIO Holdings, the JSE-listed private higher-education group, whose CEO considers a medical school his ‘big, hairy, audacious goal’. According to the company’s head of marketing and communication, Julian Ribeiro, its vision is ‘to offer premium-brand private education at the same level and cost of public universities. However, setting up a medical school is far more expensive and complex than other faculties, because it involves the provincial government, public universities, hospitals, as well as accreditation bodies such as the HPCSA and CHE’.

Currently the group is focused on migrating most of the institutions under its umbrella to the joint STADIO brand. ‘While a medical school is not our priority right now, it certainly remains our dream for the future,’ says Ribeiro.

Since it’s so difficult to secure a place for medical training in SA, the HPCSA has seen an increase in students ‘pursuing their doctor dreams’ abroad. The government has a long-standing training programme with Cuba, initiated in 1996 by Nelson Mandela and Fidel Castro, which has produced thousands of SA doctors from disadvantaged communities. However, the cost of sending a student on the Cuban programme is more than double the cost of training them at home (more than R2 million compared to R900 000, says the DA).

There are also government-funded programmes to Russia and China, and many South Africans pay their own way to study medicine in various countries worldwide. The qualifications are not always up to scratch, though.

‘On their return and after all the cost, effort and sacrifice, these students have to be registered – like all healthcare professionals in the country – with the HPCSA in order to practise,’ the HPCSA states on its website. ‘They are required to follow the same process as all foreign-qualified doctors. They’re furthermore required to complete a two-year internship training at a recognised institution – if they have not done this abroad – followed by compulsory one-year community service.’

This reignites the discussions about increasing local capacity through private medical-education providers, which would retain more medical students in the country, reduce doctor shortages and ease the pressure on the public system. Yet the Department of Health still prohibits the accreditation of private medical schools – unlike private nursing colleges, which already play a significant role. 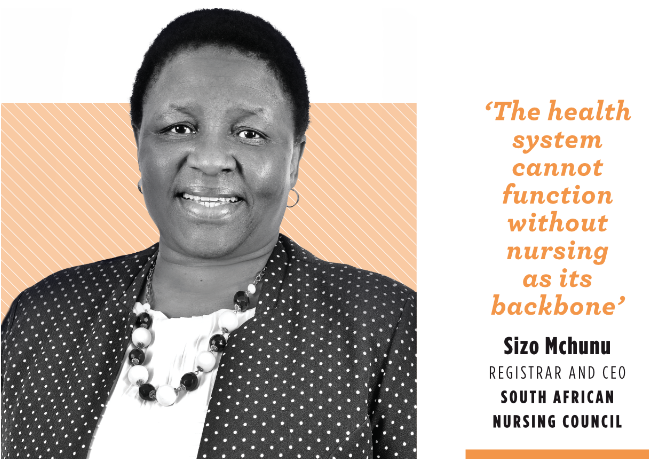 The private sector could – in addition to getting involved in medical schools – participate in the clinical training of students through private hospital groups and specialists. One such partnership is under way at SU, where undergrad students serve some of their practical training at Mediclinic hospitals.

‘We’re striving to expand our clinical teaching platform to include greater numbers of appropriate training sites, in order to continuously expose students to the primary healthcare environment early on in their training,’ says Hennie Botha, a member of the MBChB curriculum-renewal team at SU’s medical faculty, where he heads the obstetrics and gynaecology department.

‘Historically our focus used to be almost exclusively on disease and the patient, while we ignored aspects such as self-care, community and how medicine is understood,’ says Botha. ‘Our new curriculum intends to develop socially accountable doctors who are able to address the burden of disease and the realities of South Africans.’

For the majority of South Africans, nurses rather than doctors are the face of healthcare. The sector is nurse-driven, with a ratio of one nurse for 202 people, according to the South African Nursing Council (SANC).

In contrast, there is just one government-employed doctor for every 2 457 people (not covered by medical aid). In private care, one medical aid-registered doctor sees between 429 and 571 people, according to fact-checking service Africa Check.

‘The health system cannot function without nursing as its backbone,’ says Sizo Mchunu, SANC registrar and CEO. ‘Nursing is a noble profession that requires the highest degree of professionalism, dedication and care.’

In order to uphold nursing standards, the SANC regulates the training and practice of nurses and mandates that qualified nurses must pay an annual registration fee. Recently, the overhaul of nursing qualifications in SA has kept the regulatory body particularly busy, as all existing nursing training institutions – as well as newcomers – have had to apply for fresh accreditation in line with the new curriculum and training requirements.

The criteria are the same for private and public nursing training and education institutions, which include some universities. The new qualifications range from a one-year higher certificate in auxiliary nursing to a three-year diploma in nursing and a four-year bachelors degree. There’s a compulsory 12-month (paid) community service and the option of adding a one-year postgraduate advanced diploma in nursing and midwifery.

‘The phasing out of the current programmes has begun, since [as of January 2020] there are no new intakes of students into these legacy qualifications,’ says Mchunu.

And who knows, perhaps the current appreciation of nurses, doctors and other health professionals, who are sacrificing their lives for coronavirus patients, may lead to more and better medical training in SA.