It’s concerning that according to the Trends in the International Mathematics and Science Study, SA’s Grade 5 and Grade 9 pupils score poorly on international maths and science benchmarks, with proficiency ranking among the world’s lowest. And, perhaps more worrying, the situation shows no sign of improving.

Chris Campbell, Consulting Engineers South Africa CEO, believes the problem is ingrained. ‘Unless one adopts a systemic analysis and intervention at the critical levels, you are not going to achieve the desired outcome,’ he says. ‘The starting point I believe is that we have insufficient early childhood development. The foundations for all children are lacking.’

What should be urgently addressed, he continues, is at the basic-education level. ‘The competency and passion of the teachers has, for a long time, not been at the level it should be,’ he says. ‘We need to look at the teachers – do they have the knowledge and do they have the passion – because it is the competencies and behavioural traits of teachers, present or future, that make or break young people.’ In terms of the role companies and organisations have to play in promoting STEM interest among youths, Robert Zwane, senior executive of national projects at the South African Institute of Chartered Accountants (SAICA), says that ‘for scarce-skills professions like chartered accountancy, bridging the shortcomings in our education system is a strategic priority’. In this regard, he adds, quality teachers are crucial. ‘One of the biggest opportunities we as business can take is to better equip and train teachers to ensure that quality education is delivered to learners across the country.’ He calls for collaboration on programmes that pool together knowledge and skills. ‘This is especially true when it comes to STEM subjects – of which maths is of particular concern for SAICA,’ says Zwane. ‘The biggest hurdle faced by scarce-skill professions is the low number of learners passing maths with marks above 60%. We are all fighting for a slice of the same shrinking pie.’

To help create a pipeline of talent in SA, SAICA pioneered the Thuthuka Education Upliftment Fund, which works at both school and tertiary level. More than 1 million learners at school level have been reached since the programme was first implemented in 2002. Initiatives include development camps, career exhibitions featuring STEM-subject promotion, as well as educator and curriculum support programmes such as olympiads.

At university level, initiatives include the Thuthuka bursary and capacity-building programmes at historically disadvantaged institutions to facilitate access to the chartered accountancy profession. To date, the Thuthuka bursary has created more than 1 500 qualified CAs(SA) with in excess of 2 000 currently in various stages of the qualification pipeline.

According to Zwane, scarce-skills professions must collaborate to stress the message to young people that maths matters, and help them understand that the subject choices they make in Grade 9 might hamper their ability to pursue certain careers when they matriculate.

Campbell agrees, adding that better career guidance is required. ‘The information available to young people is so limited. If they don’t have the right exposure, they may even make the wrong choices and pursue subject choices or careers that limit them,’ he says.

Globally, fewer females enter careers in STEM fields than males. This is no different in SA. While the country might be the continent’s leader as far as female employment in STEM fields is concerned, it lags behind the global average of 30% of women in STEM careers, says Unesco, sitting at around 28%.

Campbell believes this is a legacy issue. ‘It has always been driven by a male-dominated society,’ he says. To change this, children need to be exposed to different forms of play.

‘At a societal level, there needs to be an openness to exposing kids to all kinds of toys. We need to encourage rather than frown on what is and isn’t “appropriate” for boys and girls. It’s the starting point for females not feeling welcomed into the STEM environment. There is an unconscious bias and it is limiting. We need to raise awareness about this.’

Attrition is another cause for concern, says Campbell. ‘We need to make the environment inclusive and welcoming, and address the issues that talk to females in the environment,’ he says. ‘All of this stifles the retention of an already small number of females. It is also self-fulfilling because, with such a limited number of role models, what message do young female learners see? They cannot relate. And that’s a major challenge.’

According to Zwane, through SAICA’s Thuthuka efforts and commitment to gender equality, the organisation has gradually seen its membership demographics for students entering into CA-stream BCom degrees as well as the two SAICA qualifying examinations shift closer to a 50/50 intake of men versus women. ‘This is the direct result of our concerted effort to ensure that gender diversity remains one of the top priorities for our pipeline school projects,’ he says.

Siemens Stiftung, the corporate foundation of Siemens AG, is an active advocate of stronger science and technology education. Its international education programme, Experimento, provides educators with practical training and continuous education opportunities, along with high-quality teaching and learning materials.

The latter helps educators devise a modern science and technology education based on discovery-based learning. The foundation works extensively across SA, and has been doing so since 2012. In 2017, it seed-funded and founded the STEAM Foundation.

‘Science and technology skills are important for shaping Africa’s long-term future, which includes expanding renewable energy and clean technology, fighting disease, [promoting] sustainable agriculture, and creating digital societies,’ says Nina Smidt, MD of Siemens Stiftung. When it comes to promoting youths’ interest in STEM, Smidt says the most important step is to ‘build the bridge between theory and technical application; between classroom knowledge and real-life science’.

One of Experimento’s aims is to encourage more females to enter STEM fields. ‘[It] offers the opportunity to experience abstract topics in a practical way and thus discover one’s strengths. It is about de-mystifying STEM subjects. That’s especially important for girls,’ according to Smidt. ‘With the help of projects like this, we can build bridges. We want to inspire young women for these STEM professions and tap their valuable potential.’ 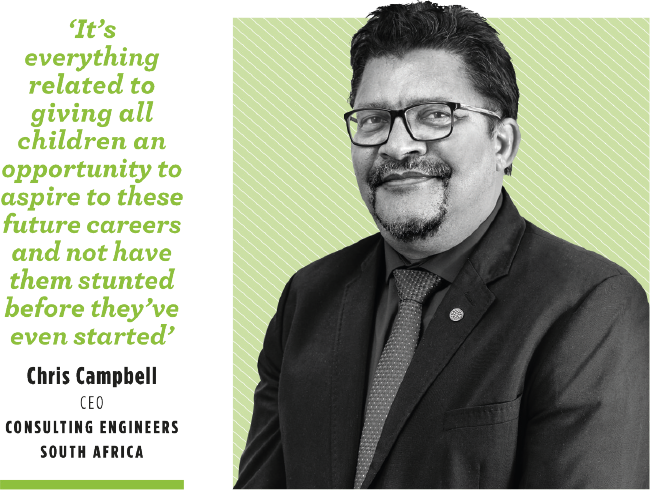 Suzanne Morel, Mastercard South Africa country manager, says the company is committed to seeing females not only succeed but also thrive in domains where they have historically been overlooked. ‘Driving inclusion and equal opportunity are key priorities at Mastercard,’ she says. ‘Through our Girls4Tech programme, we are committed to developing a strong pipeline of talent by encouraging girls to embrace the subjects that will prepare them for the workforce of the future, while helping to reduce the shortage of STEM skills that are needed to boost South Africa’s economy.’

Launched in 2014, the Girls4Tech programme, which prioritises girls between the ages of seven and 12, offers activities and a curriculum built on global science and maths standards, enabling students to discover a range of STEM careers.

‘A lot of girls believe that they are not cut out for technology careers and need more confidence. They need to have good role models so they can see that they can do it too,’ says Morel. ‘STEM skills are not only critical in giving women a leg up in the job market, but they can also help to boost their earning potential. This is important if we are to close the gender pay gap.’

Further bolstering SA’s technology skills sector, Nedbank announced in July 2021 that it was joining forces with Amazon Web Services (AWS) to provide free cloud-computing skills development and job training to unemployed youths, through the AWS re/Start initiative. The programme is part of AWS’ commitment to train 29 million learners for free by 2025. Learners for the programme were selected from the Nedbank’s 2021 Youth Employment Service programme.

Bianca Swartz, Nedbank cloud migration and transformation lead, says that ‘these skills are especially needed in a world where technology expertise is falling short of the requirements as we move into a world in which the way of work will change forever, spurred on by the coronavirus pandemic that has decimated lives and economies across the world’.

While much is currently being done to promote the uptake of STEM subjects by learners and the pursuing of careers in STEM fields, it is evident that a greater collective effort is needed. Campbell adds that while collaboration is certainly needed to address the issues, SA first needs to acknowledge that it has a serious problem.

‘We’ve compromised quality over quantity. It comes down to the teaching environment,’ he says. ‘It’s everything related to giving all children an opportunity to aspire to these future careers and not have them stunted before they’ve even started.’