Media headlines trumpet it, opinion pieces paint it as the answer to SA’s jobs crisis, corporates put it at the top of their CSR agendas. And, with our employment figures looking increasingly bleak, the E-word is gaining more and more prominence.

Globally, entrepreneurship is seen as a driver of economic growth and job creation, especially in emerging economies. And with SA’s employment shortage, it’s seen as imperative that this sector grows – fast. Given low economic growth, companies in the private sector are either cutting jobs or not hiring as they try to prevent further retrenchments.

According to the Quarterly Labour Force Survey for Q2 2019, SA’s unemployment rate increased by 1.4 percentage points from 27.6% in the first quarter of 2019 to 29% in the second quarter. More than 6.7 million people are unemployed in SA, with only a third (33.4%) of those having a matric.

Entrepreneurs are not only vital for creating businesses and wealth for themselves, but also for helping to create jobs for others, and so breaking the cycle of generational poverty. Growing entrepreneurship has many benefits for any country. As for SA, which has such a high youth unemployment rate, the significance of focusing on youth entrepreneurship cannot be overemphasised.

Setlogane Manchidi, head of CSI at Investec South Africa, explains: ‘This is because the active economic participation of many South Africans can be facilitated through entrepreneurship. Entrepreneurs create businesses and new businesses create jobs and help fight youth unemployment. ‘South Africa’s everyday social challenges and other needs may very well be addressed through the youth’s entrepreneurial lenses,’ says Manchidi. ‘Entrepreneurship has the power to awaken the creativity, potential and purpose in South African youth – which will in turn benefit all in this country.’

Sunil Geness, director of government relations and CSR at SAP Africa, agrees, and considers the youth unemployment crisis a significant opportunity to ‘scale-up and transform the future of Africa through skills development and entrepreneurial innovation’ during what he calls a time of significant change for the continent that has the world’s youngest population. It’s a topic that NGOs, corporate boardrooms and government take very seriously indeed.

President Cyril Ramaphosa referenced this in his State of the Nation Address in June when he announced that government would expand the scale of its foremost youth employment programme, the National Youth Service. The programme will take on tens of thousands of young South Africans, as well as assisting young entrepreneurs working in, for example, sectors linked to new technologies. Even as Deputy President, Ramaphosa called for entrepreneurship to be included in the basic education curriculum. 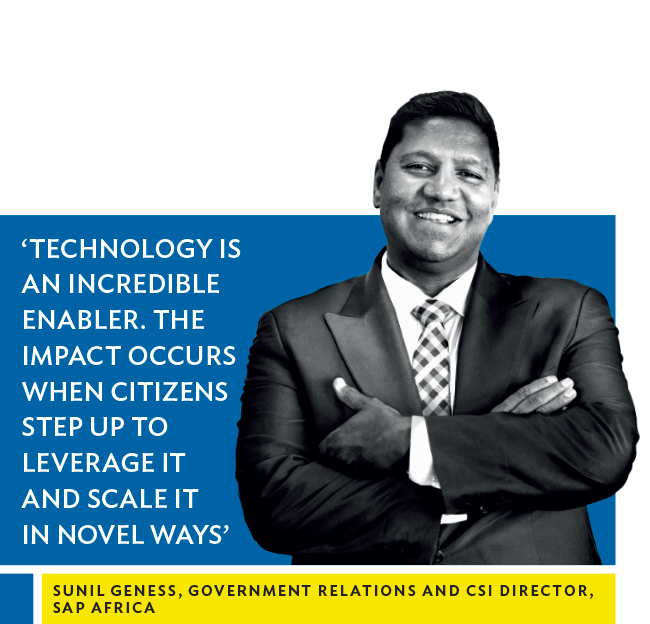 So we know just how important entrepreneurship is – but how are we measuring up? Right now, we are lagging. Just 15% of SA start-ups are successful, despite SA having the second-highest ranking on the continent, according to the 2018 Global Entrepreneurship Index. A report on the State of Entrepreneurship in SA, by the Gordon Institute of Business Science, found that although entrepreneurial activity is increasing, SA still trails other countries, according to ExpertHub.

It quotes Nontobeko Mabizela, Allan Gray Orbis Foundation head of impact assurance, who says that ‘never in South Africa has there been such a crying need for entrepreneurs who not only succeed, but who have the ability to positively impact and transform their community’.

For entrepreneurs to bring new ideas to life they need to be encouraged and supported as their entrepreneurship journey can be a long, difficult and lonely journey, Manchidi points out. ‘The private sector can contribute by supporting programmes aimed at stimulating entrepreneurial thinking and activity, making self-employment both possible and attractive among youth in South Africa,’ he says. This includes ‘facilitating opportunities that nurture and enable innovation which in turn contribute to increased entrepreneurial activities. Where appropriate, the private sector should facilitate access to finance as well as markets, just to ensure that emerging entrepreneurs have a fair chance to succeed’.

SA may have a way to go, but there is no shortage of youth development initiatives on the boil. The Youth Empowerment Service, known as YES, is one of the first social initiatives between government, business and labour created with the aim of giving a million young people opportunities to succeed at entrepreneurship. Over the next three years, the programme will incentivise businesses for hiring youth and giving them an opportunity that they may never have had before with real work experience and learning.

The Junior Achievement South Africa (JASA) initiative, meanwhile, is based on the belief that SA’s youth need education and training. Its Youth Development programme teaches young achievers between the ages of 18 and 35 to establish their own sustainable venture. It introduces students to entrepreneurial concepts that will inspire them to build their businesses. They get to start their own company in an incubator-style programme while receiving support, as well as being introduced to micro-finance institutions.

Then there’s the National Youth Development Agency, which offers a government grant to fund youth entrepreneurs in SA. The programme has been also been broadened to include mentorship and development initiatives. Young people can apply for the grant funding, whether their business is formal or informal and in either the start-up or development phase. The grants apply to youth-owned businesses that are actively involved in community development and facilitation projects.

The corporate sector, too, is a massive driver in this sphere, with scores of standout examples. Investec has a number of entrepreneurship-related programmes. These include a global exposure programme, in which the company sends a group of young entrepreneurs from various sectors to specifically selected countries to gain international exposure. Each itinerary provides them with opportunities to network and to engage with venture capitalists, funders and captains of industry.

The aim is for them to return home not only stimulated and inspired, but also with a list of potential partners, funders and markets for their product or service. Many of these entrepreneurs have also chosen to participate in some of other entrepreneurship programmes on return from these global exposure trips. 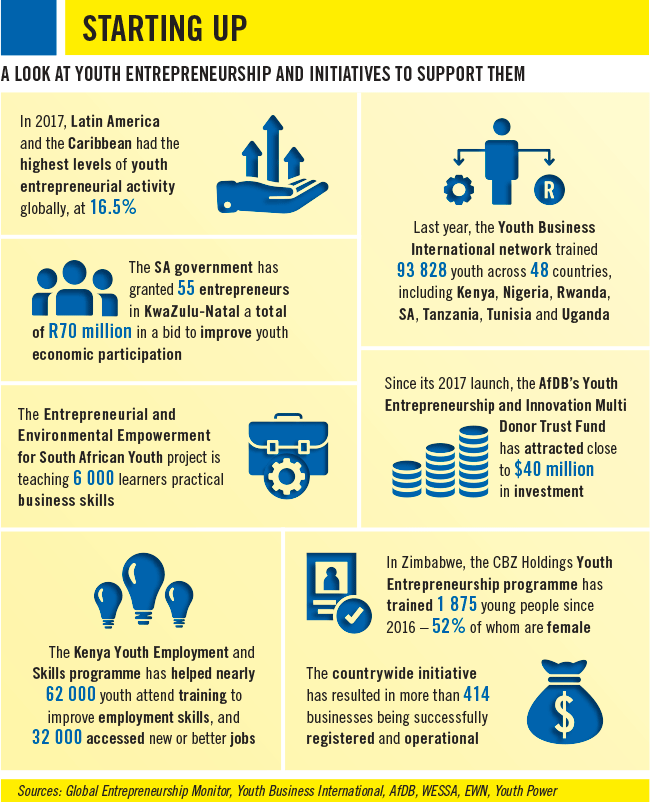 Investec also has its StartUp School. Launched by successful entrepreneurs in SA with Investec’s support, the initiative offers entrepreneurs the opportunity to expand on their business insight through a challenging and interactive 12-week online learning journey.

The programme enables the young participants to develop their networks and make new connections. By the end of the course, the attendees emerge with a comprehensive business plan and an enhanced understanding of how to develop and fund a business.

For its part, SAP is focused on getting young entrepreneurs skills-ready to meet the needs of the new digital economy. ‘For years, SAP has been engaged in Africa’s workforce readiness, youth employment and entrepreneurship,’ says Geness. ‘Our endeavours helping African youth gain basic coding skills show youngsters that they have self-efficacy and are not shaped by technology, but rather have the ability to use technology to shape their future.’

In 2015, the global software solutions company launched Africa Code Week, an ambitious, continent-wide digital skills development initiative, which has engaged more than 4.3 million youth and 50 000 teachers across 37 African countries, including SA. The 2019 programme will introduce an additional 1.5 million African youth to code and 21st-century digital skills.

The SAP Young Professional programme and the SAP Dual Study programme are offered under the auspices of the Skills for Africa initiative, and are designed to build digital-skills capacity and support the broader SAP ecosystem within key African markets. ‘Technology is an incredible enabler,’ says Geness. ‘The impact occurs when citizens step up to leverage and scale it in novel ways to inspire progress in a rapidly changing world. Digital technology in Africa will enable exponential growth and inclusive, sustainable development in the coming years.’

Barloworld announced in July that it wanted to bridge the gap for start-up social enterprises across SA and do things differently by setting up a R30 million fund for innovative business ideas that actively solve local challenges. As a result, the industrial conglomerate launched Barloworld Mbewu (‘seed’), a next-generation approach to corporate social development geared towards scaling up social enterprises.

Global soft-drinks giant Coca-Cola, meanwhile, is working locally through Coca-Cola Beverages SA to help young people struggling to get onto the employment ladder, by introducing them to the possibilities of entrepreneurship, through a concept dubbed Bizniz in a Box. The initiative gives young people between the ages of 24 and 35 and living in townships the opportunity, skills and funding to set up and run their own successful container shops.

Many of SA’s financial institutions are also at the vanguard of boosting enterprising initiatives with various creative programmes to bring attention to entrepreneurship, and provide financial advice and support. Manchidi states the reason for this in a stark manner: ‘The more people are enabled to earn an income through the creation of successful enterprises, the more disposable income they have, which can be positive in stimulating further economic activity and associated growth.’

Stimulation of business growth, job creation and facilitating income generation through entrepreneurship is a significant way of growing the economy – a focus on the youth will also contribute towards economic growth among young people. It may not yet be enough, but entrepreneurship is undoubtedly getting the attention it needs. The seed has been planted.