From education and healthcare to skills development and housing – and plenty in between – mining companies are at the forefront of community upliftment, contributing millions of rands each year. But apart from investing, ensuring the projects have an impact is what’s really important.

Gold Fields – which operates the South Deep mine in SA – focuses on socio-economic development initiatives and shared value projects, targeting the priority needs of host communities. These include employment, skills and enterprise development, environmental rehabilitation and access to water. South Deep is located near Westonaria in Gauteng’s West Rand District Municipality, home to 10 host communities, with an estimated 111 000 people impacted by the mine.

Among Gold Fields’ initiatives are numerous community procurement projects, where the mine seeks to acquire goods and services from its host communities; a skills training drive, covering early childhood development through to tertiary level; an agriculture programme; and a healthcare facility. These are delivered directly or through trusts and foundations, often in partnership with government and NGOs and, in SA, via an alliance with its peer, Sibanye-Stillwater (previously Sibanye Gold).

Sven Lunsche, vice-president of corporate affairs at Gold Fields, believes that the host community procurement project has had the greatest effect. ‘It creates jobs in the communities in which we operate. Unemployment is a huge issue in most of our host communities in developing countries,’ he says. ‘If we don’t provide these jobs, unemployment creates many social issues. It also builds up a skills base in these communities, which enables further job creation down the line.’

According to Lunsche, procurement spend is Gold Fields’ largest budget item. ‘By allocating as much as is feasible from this large budget to national and host community suppliers, contractors and other service providers, we ensure that a large portion of our spending stays in these communities – to the socio-economic well-being and benefit thereof,’ he says. 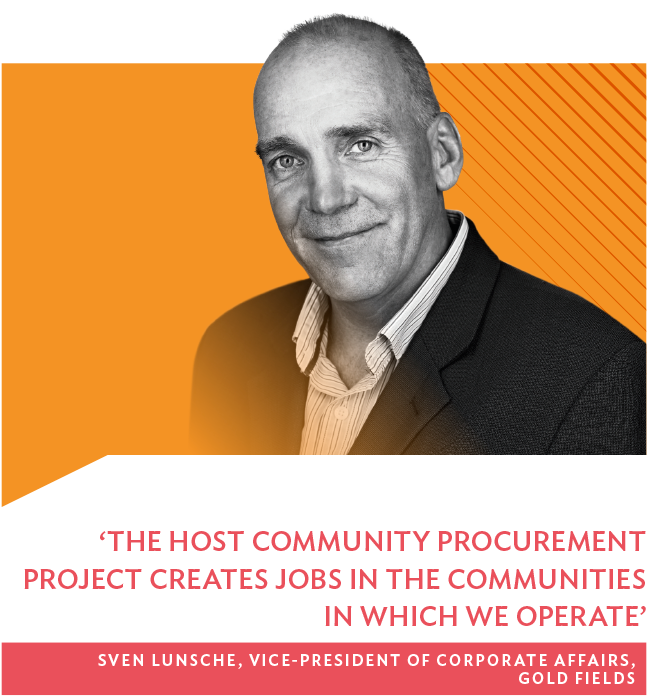 Over the last five years, Anglo American’s businesses in SA have contributed R3.2 billion to mine communities through infrastructure development in healthcare, education, housing and sanitation. In addition, the company’s dedicated CSI initiative – the Anglo American Chairman’s Fund – makes investments on a national scale. During the same period, in excess of R430 million has been spent through this fund, which focuses on early childhood development; teacher advancement in mathematics, science and languages; infrastructure support to rural schools; innovative HIV/Aids prevention programmes; public healthcare; and skills improvement.

According to John Nkosi, Impala Platinum’s manager of group sustainable development, the company has spent more than R3.7 billion in providing accommodation and improving living conditions for its workforce.

‘To date we have built approximately 3 200 houses for our employees, the majority of whom are first time homeowners. In 2014, we, in partnership with the Impala Bafokeng Trust and the North West provincial government, completed Sunrise View primary and secondary schools, which benefit over 1 300 leaners from local communities. In 2017, we spent R2.6 billion on procurement from local tiered suppliers in the Bojanala district of Impala Rustenburg and the greater Sekhukhune district for Marula Platinum. Through our partnership with the Impala Bafokeng Trust, we continue to support education, healthcare, capacity-building and sport and recreation projects in the North West.’

Nkosi says the sustainability of the company’s mining activities depends ultimately on the well-being and prosperity of its mine communities.

‘We engage proactively with communities and other stakeholders – local municipalities, tribal authorities and regional government – to identify needs in our communities and to ensure that the socio-economic initiatives we embark on are not only designed for maximum impact but help build sustainable communities.

‘These initiatives have strategic implementation plans and are continuously monitored. Each year external consultants conduct an independent review and assessment of the socio-economic impacts of a selection of our social investment projects.’

Sasol has been influential in the industrial growth and socio-economic development of SA for nearly 70 years. Through its mining business unit, the organisation creates jobs and contributes to social and economic progress in its host communities. Key social investment projects include War on Leaks (plumbing artisan training), an HIV/Aids community initiative, and the Siyazenzela Youth in Business programme. Under way within the Govan Mbeki Municipality in Mpumalanga, the Siyazenzela programme empowers and develops SMEs, equipping them with life skills and work experience within the business environment. In the two years that it has been running, 55 existing and start-up business owners have graduated.

According to Melanie Naidoo-Vermaak, sustainable development executive at Harmony Gold, the firm’s primary concern is the development of its host communities and labour-sending areas. ‘Our key focus is on health, education, agriculture and infrastructure – each of which are equally important,’ she says. ‘We believe that leaving communities with self-sustaining projects; learnerships and bursary schemes for children; access to information through digital hubs; and sustainable agricultural projects, all play an important role in providing a better life for everyone.’ 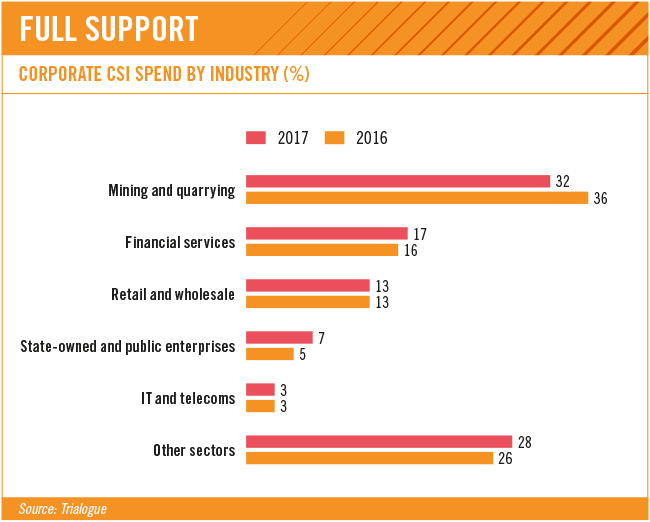 Naidoo-Vermaak believes it is ‘imperative for corporate South Africa to support social initiatives’. Moreover, she adds, corporates must identify the different needs of the communities in which they operate or serve, and then have a strategic action plan in meeting those needs.

Tracey Henry, CEO of Tshikululu, says social investors, regardless of the size of their financial portfolio, will always have limitations. ‘Deciding on what the end state looks like, and how to get there, should be a deliberate process of informed decisions backed by sound developmental principles.

‘Social investors also require sound governance and ethical frameworks to guide their decisions, and they need to develop robust governance and risk management frameworks. These are often perceived as onerous and against the “spirit” of giving. But social investment is not about giving. It’s about backing initiatives that have a deliberate vision and clearly defined outcomes, involving financial resources and an investment in partnerships that should focus on transforming lives and increasing opportunities to advance,’ she says.

‘Social investment is not simply a random act of kindness; rather, it is a considered decision to propel people forward.’