For those who were raised on a diet of sci-fi novels and Star Trek TV shows, the compact ZACube-2 doesn’t look like much. Standing only a few centimetres tall and weighing just 4 kg, the unit is about the size of a four-slice toaster – or (given what it can do) the size of an incredibly advanced desktop computer tower. But as anyone with an interest in digital technology will tell you, looks can be deceiving. As one of Africa’s most advanced nanosatellites, the ZACube-2 – which cost about R16.5 million to build and was launched into orbit about 700 km above the Earth in early 2019 – is the first of a planned ‘constellation of satellites’ that SA’s Department of Science and Technology (DST) plans to send into orbit in the near future.

ZACube-2 was developed by the Cape Peninsula University of Technology (CPUT), Stellenbosch University, the CSIR and the South African National Space Agency, and it is also the latest entry in a worldwide space race for Africa. SA, with its home-grown satellite development programme, is one of the frontrunners in that race.

Yet other countries are also seeing the opportunities provided by Africa’s skies. At the beginning of 2018, UAE-based satellite operator Yahsat launched its third commercial satellite, Al Yah 3, with the aim of expanding its commercial Ka-band coverage to reach 60% of Africa’s population. Al Yah 3 is able to provide broadband connectivity to 95% of Brazil, plus 24 countries across Africa – from Cameroon, Côte D’Ivoire and Nigeria to Algeria, Angola, Ghana, Malawi, Morocco, Mozambique, Rwanda, Senegal and others.

Speaking to ITWeb on the day of the launch, Yahsat CEO Masood Sharif Mahmood said: ‘The demand that we have seen in the market, and especially in the African market, has encouraged us to enrich our capacity in those markets and also increase the number of countries that we have coverage in. […] Africa is an important market for us and after six years of operation in that market, we are the number one satellite and broadband provider in Africa.’ 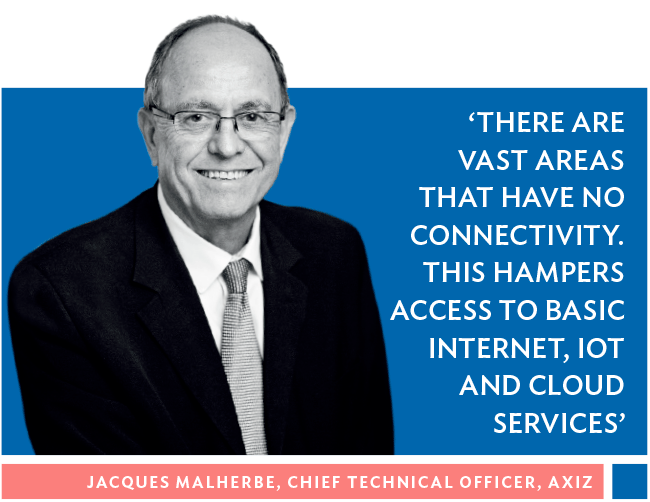 Australian-listed company SAS Global is one of dozens of other companies that might want to challenge that last part of Mahmood’s statement. Hoping to capitalise on Africa’s data services boom, SAS Global recently announced plans to launch 200 nanosatellites by the end of 2020, with the intention of tapping into that African market. ‘We are on track for launch next year and within less than two years we will have the entire constellation of 200 satellites in space,’ SAS Global CEO Meir Moalem told Reuters in November 2018. ‘Africa is a huge untapped market with very large economic opportunity.’

Intelsat would agree. In October 2018 the global communications satellite services provider – which, incidentally, provides the satellites for Multichoice’s DSTv offering – announced a strategic investment in Africa Mobile Networks (AMN) to accelerate the deployment of mobile connectivity to unserved communities across sub-Saharan Africa. ‘Intelsat shares our view that mobile coverage isn’t spreading quickly enough [in Africa] and as such, invested in AMN’s vision of installing a cell site in every African village,’ according to AMN CEO Michael Darcy.

‘Together, we can accelerate the deployment of mobile connectivity and work to ensure that communities, wherever they are located, have equal access to high-quality, sustainable and affordable broadband connectivity.’

Like SA specifically, Africa in general covers a large, hard-to-reach area that terrestrial fibre cables can’t easily or affordably access. Those gaps in connectivity represent – as Moalem said – a huge, untapped opportunity for technology firms that can offer satellite connectivity. In this environment, Ka-band high-throughput satellites (HTS), with their economic broadband speeds, low-cost terminals and simple implementation; and nanosatellites such as ZACube-2, with their relatively affordable $1 million price tags, make clear business sense. ‘It’s extremely cost-efficient,’ according to Moalem. ‘That means you can get your return on investment without charging an arm and a leg for the services you are selling.’ 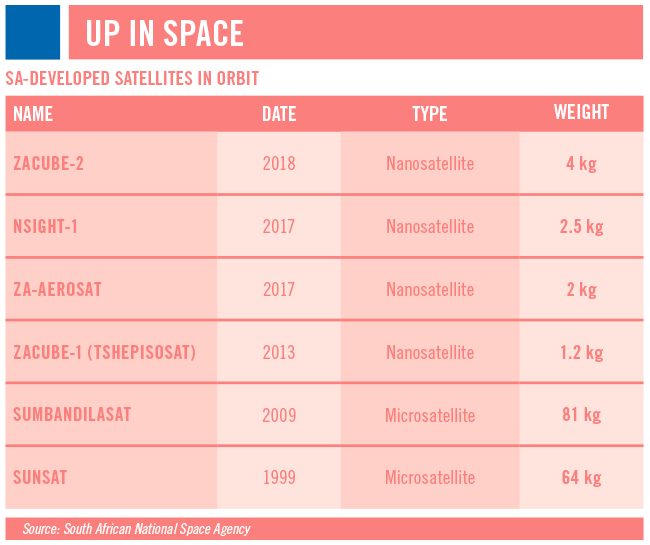 Satellites are becoming more cost-effective by the day and the technology is moving forward at such a rapid rate that US satellite communication company EchoStar is now planning its satellite development to keep up with the advances. During an earnings call in February 2019, EchoStar’s chief financial officer David Rayner said: ‘We can go spend and build two Jupiter-3 [Ka-band satellites] simultaneously and have that capacity available longer, but the reality is that a subsequent satellite is going to have better technology, better economics; and so you want to try stage things appropriately so that you get the best returns on the capital investment.’

That’s exactly why SA is investing in this technology. In February the DST announced further funding for CPUT’s satellite programme, whose scientists were behind the ZACube-2 nanosatellite. Speaking at a plenary briefing after the ZACube-2 launch, DST director-general Phil Mjwara said: ‘We have contracted CPUT to develop three more nanosatellites to the value of R27 million to be launched by 2020. This investment will allow us to take full advantage of South Africa’s vast and exclusive economic zone, our oceans, which have the potential to add R177 billion to the country’s gross domestic product and create over 1 million jobs by 2033.’

ZACube-2’s primary mission is to monitor the movement of ships along SA’s coastline, providing navigational data to the government in support of its broader Operation Phakisa initiative to grow the country’s maritime economy. (It also has an onboard camera that helps detect veld fires.)

ZACube-2 is significantly lighter than 1957’s original Sputnik, the first man-made satellite to be launched into space, weighing in at 83 kg. And, in the eyes of some critics, satellites have always been – and will always be – slow and expensive, with data latency problems that make it an inferior alternative to fibre connectivity. ‘That was almost true back in 1960, when satellite was invented,’ Kim Gruttke of satellite network solutions company Q Kon writes in a recent blog post. ‘With the latest satellite technologies enabling +50 Mbps links to customer sites and cost points dropping, it’s a completely new landscape. Our advice is that perceptions and past experiences should best be evaluated under new technology scenarios to get an objective and updated view.’

Gruttke suggests changing the argument from whether to use satellite or fibre, to when to use satellite and when to use fibre. ‘These are very different communication technologies, and they are alternative options, not competing options,’ he says, pointing out that while fibre is ‘a long-term, point-to-point, fixed location and fixed cost option’, satellite is ‘a tactical, anywhere, anytime, flexible, point-to-multipoint option’.

Local ICT company Axiz, a subsidiary of JSE-listed Alviva Holdings, appears to agree with that line of thinking. In January Axiz partnered with broadband satellite solutions provider Innova HTS to expand its digital platform offering. ‘Because of the geographical spread in both South Africa and the rest of Africa, there are vast areas that have no connectivity,’ according to Axiz chief technical officer Jacques Malherbe. ‘This hampers access to basic internet, IoT [internet of things] and cloud services. All these Fourth Industrial benefits can only be realised with connectivity.’

Innova HTS director Rob Griggs, meanwhile, explains how his company’s Ka-band HTS technology would answer any lingering questions about speed and latency. ‘While Ka-band HTS has been in the First World for three years, extensive coverage for Africa only came about with satellites being launched from late 2017 onwards,’ he says.

‘Ka-band HTS is a game-changing, industry-wide innovation that is vastly expanding the market for satellite communications. Furthermore, the economic broadband speeds, low-cost Ka-band terminals and simple implementation lend itself to a channel model from a respected distributor such as Axiz.’

As the demand for high-speed connectivity spreads from SA’s metros into its more remote areas, this level of interest in affordable and reliable satellite solutions seems set to grow. While the scope of ZACube-2’s mission remains limited to monitoring the country’s coastline and watching for veld fires, the significance of its development (in SA, by South Africans, for SA) shouldn’t be underestimated.

Businesses that see an opportunity in this rural connectivity gap – or whose operations demand this gap be closed – may soon find themselves tapping into this technology too… Or at least looking to the skies for solutions.