Are we setting our girl children up for failure by not encouraging them to pursue careers in STEM subjects – science, technology, engineering and maths? Unesco estimates that in 2017, 130 million girls between the ages of six and 17 were not in school and that 15 million girls of primary-school age – half of whom are in sub-Saharan Africa – would never enter a classroom.

The World Bank has deemed girls’ education a strategic development priority. Better-educated women tend to be healthier, participate more in the formal labour market, earn higher incomes, marry at a later age, have fewer children, and enable better healthcare and education for their children (should they have them), it says – consequences that help lift households, communities and entire nations out of poverty.

Jackie Carroll, CEO of Media Works, one of SA’s leading adult education and training providers, says that, by and large, the country’s education system is failing its learners – girls even more so than boys. ‘In the matric courses offered by Media Works, the majority are women who were unable to complete their schooling. The reasons for this are myriad: financial, in many instances, but also circumstantial. Unplanned pregnancies and familial obligations fall hard on young women, and their education often suffers as a result,’ she says. ‘I think this is a legacy issue, which has unfortunately been normalised. We have come from a very paternal cultural position, and it will take time to balance out.’

Filling roles in STEM fields has a lot to do with the way the world will look and function in the near future – the Fourth Industrial Revolution being upon us. Research shows that up to 80% of jobs will soon be technological or, at the very least, related to technology. Will SA be ready? ‘There are currently quite a few initiatives to ensure that as South Africans, we are ready for the Fourth Industrial Revolution,’ says Carroll, adding that much focus has been placed on STEM subjects at both school and higher, tertiary levels.

The mandate of the Sasol Foundation is to support STEM education. Programme manager Rufus Wesi says the foundation prefers interventions that have a broader systemic impact which will be felt through the entire education system. The initiative with the greatest direct impact on girls is the foundation’s bursary programme, he says. Offering bursaries for studies in science, engineering and technology fields, it has a deliberate target of 60/40, female-male split. ‘It’s not an ordinary bursary programme either,’ says Wesi.

‘It’s accompanied by comprehensive support, including mentoring and assistance with research by our scientists at Sasol. At least twice a year, we fly scientists from our research and development facility to the universities where our bursary students are, to help them with the subject matter and research. Between visits, students are supported through online mentoring. On a regular basis, we also bring the students to our labs for hands-on experience.’ While the number varies per year, more than 1 400 students have benefited from the bursary programme since it was founded in 2011.

The foundation’s mobile science laboratories are another highly successful initiative. Completely refurbished ‘Kombi’ buses that have been made safe to load and transport science equipment are sent to schools in mostly rural areas, where they are run – and staffed – by the foundation’s partners, including Sol Plaatje University in the Northern Cape, Unisa in Gauteng, and the National Education Collaboration Trust in the Eastern Cape. 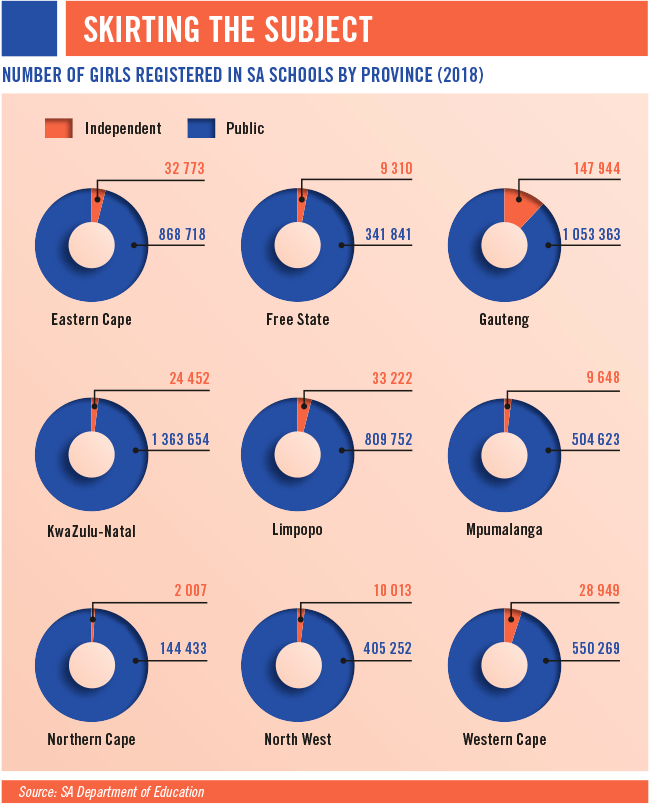 Wesi says the difference this programme has made in rural schools is phenomenal. He highlights the improvement in science marks as evidence of this. ‘We have a number of schools in the Eastern Cape that have remarkably improved their science marks from 16% to 100%; 43% to 97%; 28% to 100%; and 9% to 86%. That is a very definite impact.’ There are currently nine mobile labs servicing four provinces, though two more will be handed over within the coming few months.

To inspire young people to pursue careers in STEM fields, Shell has created various education platforms and offers bursaries for learners to pursue STEM-related studies at institutions of higher learning. Rally to Numeracy, which was introduced in 2011, has helped increase educator understanding and teaching of the maths curriculum, in so doing improving numeracy levels in beneficiary schools. Shell has also partnered with institutions such as the Maths Centre and the Read Foundation to give STEM learning opportunities to students, as well as to further develop teacher training in these subjects.

In SA, IT is a field still dominated by males. To address this, IT firm Dimension Data runs a Saturday school. The programme extends over two years and assists 100 learners in grades 11 and 12 each year. Of those, 60% are female. ‘We have enhanced the curriculum since the inception of the programme in 1995,’ says Zellah Fuphe, executive director of corporate services at Dimension Data Middle East and Africa. ‘Originally our programme focused only on maths and science but has now grown to include additional subjects, including coding, leadership, ethics and entrepreneurship modules.’ In these sessions, the learners are encouraged to develop self-leading skills and to view themselves as proponents of change, including contributing to a diverse and inclusive society, she says.

Together with its partners, including the Moshal Scholarship Programme, the South African Actuaries Development Programme and the Belgium Campus, Dimension Data offers full bursaries to learners wanting to study further. ‘Over the years, the Dimension Data Saturday school has produced actuaries, medical doctors, engineers of various disciplines, computer scientists, entrepreneurs, to name a few,’ says Fuphe. ‘Of the 44 learners who have been awarded a bursary through Dimension Data, 70% have been female.’

Samsung’s Engineering Academy is helping the tech giant to further its mission of developing technicians, technologists and engineers across SA, to address the critical technical and engineering skills shortage. Established in 2011, the academy (which comprises six campuses focusing on different skills) equips unemployed matriculants from low-income areas with the latest global technological skills. There are two intakes each year for both the Women Technical Programme and the Boys to Men initiative. There has already been remarkable success, with hundreds of students enrolling and graduating every year since the academy opened.

According to its 2018 Sustainable Development Goals report, the membership demographics of the South African Institute of Chartered Accountants (SAICA) have changed over the past five years, moving more in line with the demographics of the national population. This, it says, is largely due to the work of Thuthuka, which supports programmes targeting numeracy and literacy. Since Thuthuka’s first cohort of students came through the pipeline and qualified as new members in 2012, SAICA’s gender transformation commitments have represented an even split between new male and new female members. Some 6 211 new female CA(SA)s have qualified since 2012. 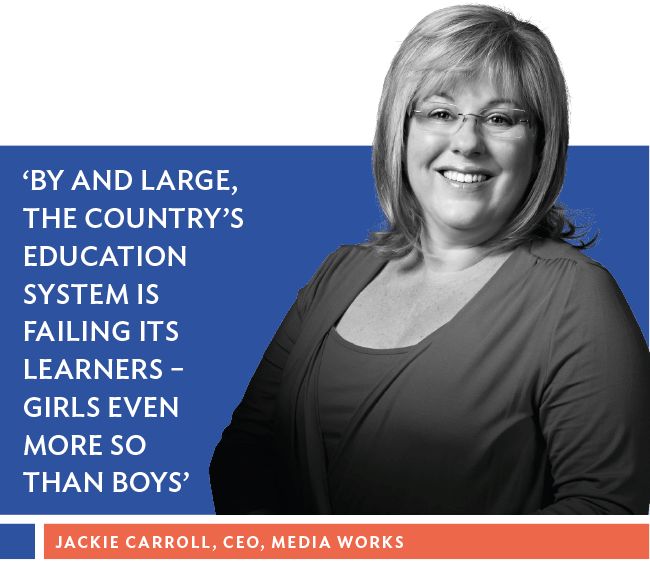 As at May 2019, 18 509 (or 39%) of SAICA’s CA(SA) and AGA(SA) members were female. Among the female-focused projects run by SAICA is the Thuthuka Girl Learner Development Camp, run in conjunction with the Gauteng Department of Education. The camp is aimed at encouraging girl learners to study towards STEM careers, including chartered accountancy. In 2018, just shy of 300 female learners were supported by this initiative.

Robert Zwane, SAICA senior executive: national projects, says: ‘We need to shine a light on the professionals who are doing great things and happen to be female. I use “happen” because they are as capable as I am. In my very own profession, the accounting profession, I see great women who have broken so many barriers and continue to do so today.’

Consulting firm Accenture’s Coder Dojo initiative enables disadvantaged youths to develop critical digital skills. For the initiative, Accenture South Africa partners with Wits University’s Tshimologong Digital Innovation Precinct and the Joburg Centre for Software Engineering, providing both training and job opportunities. Last year’s programme culminated in the 2018 Hour of Code – a coding-focused workshop and maker space, attended by 65 youth from across Johannesburg. The firm also partners with Reconstructed Living Lab on an initiative through which more than 4 000 disadvantaged youth have been equipped with ICT skills. One of these is Thembeka George from the Free State. She studied coding through this initiative and went on to develop an app that helps young people create CVs for themselves. She now works as a programmer at a global tech company and is getting ready to launch her own business.

‘When we compare ourselves to other BRICS countries, we are punching below our weight when it comes to technology, mainly because of our education system,’ says Khethiwe Nkuna, head of corporate citizenship and inclusion and diversity lead for Accenture in Africa. ‘Coding is one of the basic enablers allowing people to access opportunities within the digital economy. There’s definitely an opportunity in South Africa that needs to be accelerated.’

As for what we could be doing to encourage more female youths to take an interest in STEM subjects and careers, Wesi says that while a number of drives by government or other agencies exist, they lack cohesion. ‘We need co-ordination of these efforts so that their impact is better felt. There’s a need for evaluation, co-ordination and monitoring, so that we know what is happening, what’s changed. Have we moved the needle or not yet?’ he says. ‘Do we need to do more, and if so, how much more?’