Not much happens out in De Aar. Located in the middle of the Northern Cape, it’s known for its sunshine and not much else. Yet sleepy little De Aar is putting itself on the map in a big way with a green economy landmark that will soon set the benchmark for bigger towns and cities.

In March this year, De Aar harnessed that sunshine and opened the biggest solar farm ever completed in the southern hemisphere, Africa and Middle East region. The 175 MW, 473 ha facility – operated by Solar Capital – is the culmination of a R4.8 billion, two-phase project. It consists of 503 942 solar modules; took just more than two years to build; and has the capacity to provide power to approximately 75 000 homes every year. (That’s almost double De Aar’s population.)

‘The Northern Cape of South Africa has some of the highest irradiation levels in the world, with the location of this facility boasting 2 168 kWh/m²,’ Solar Capital chairman Paschal Phelan said at the launch. ‘This allows the abundant sunlight in the region to be converted into green energy to be transferred to the national energy grid.

‘The launch of the solar farm is not only a success in its own right but also allows for the opportunity to spread the message of solar success. It has no mechanical parts, it has minimal operation costs, no emissions, no water usage and it is safe. It needs to be a priority in South Africa that we continue the investment in this source of abundantly free, green, sustainable energy.’

The project – and those spin-off benefits – was part of the Department of Energy’s (DoE) Renewable Energy Independent Power Producer Procurement (REIPPP) programme, which allows for foreign investment in renewable energy.

Launched in 2011, the REIPPP has already attracted more than $14 billion in investment. Nearly 30% of that has been foreign direct investment (FDI), providing a significant boost to the country’s GDP growth. At the same time, SA’s total installed renewable capacity surpassed 1.3 GW in 2014, with the largest contributor being solar PV at 774 MW, followed by wind at 570 MW.

‘The REIPPP has been a resounding success, spurring not only investment into South Africa’s energy sector, but in the broader region,’ Scott Brodsky, partner and energy lawyer at international law firm Macfarlanes, said in a recent statement. 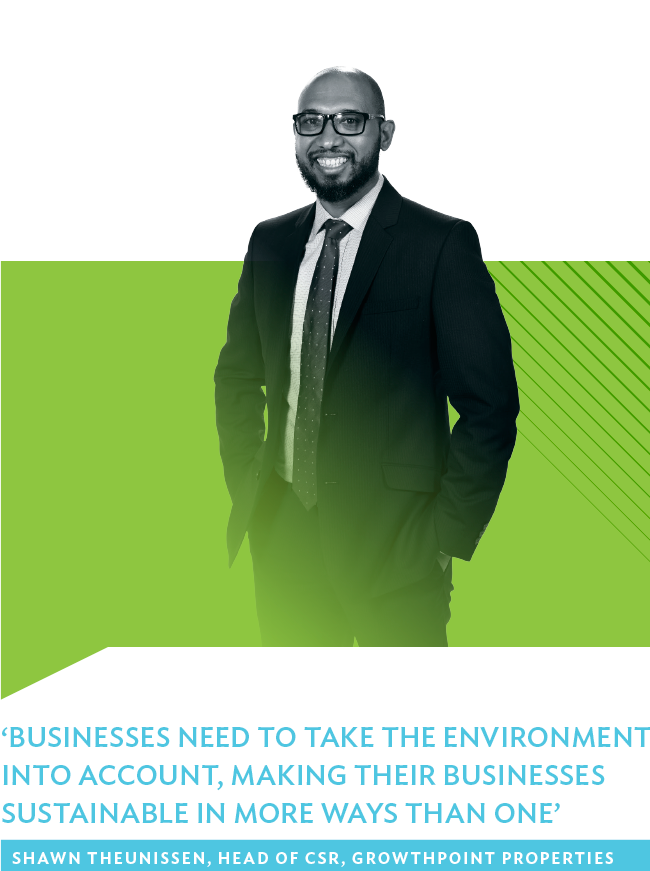 That sentiment was echoed by the African Development Bank when it announced a $1.34 billion loan towards Eskom’s capital expenditure programme. ‘South Africa has the third-most attractive renewable energy market across emerging markets – behind China and Brazil – and this programme, spearheaded by the South African Department of Energy, is an example of how to approach green growth in Africa,’ said Stefan Nalletamby, the AfDB’s acting vice-president for private sector, infrastructure and regional integration.

‘The REIPPP programme is bringing about a tangible transformation to our country’s power sector and economic and physical landscape,’ Sandra Coetzee, head of strategy at the DoE’s independent power producer (IPP) office, said at a recent conference held in Sandton.

Part of that positive spin-off has been how major companies have supported SMEs dedicated to the green economy. In August last year, enterprise development firm Fetola partnered with the JP Morgan Chase Foundation to launch the pilot #JustAddGreen SME accelerator programme in Gauteng. The initiative aims to stimulate and strengthen emerging businesses to become environmentally sustainable suppliers to corporates – and successful businesses in their own right.

‘Interest in the green economy is rapidly increasing among citizens who recycle, reduce energy usage and strive to eat healthier food,’ according to Fetola director Catherine Wijnberg. ‘There is also a growing awareness in sustainable practices in South Africa from government, the corporate sector and finance houses alike, making this a timely initiative.’

Then, in October 2015, risk financier Business Partners Limited launched a R300 million green fund, which aims to finance and support SMEs operating in the green industry. The fund will provide expansion capital, start-up funding and property finance of between R500 000 and R30 million to selected ‘ecopreneurship’ businesses.

‘We recognise the huge market potential of the green economy – opening new and growing opportunities for both large businesses and small and medium enterprises alike,’ Nazeem Martin, then Business Partners Limited MD, said at the launch event in Cape Town.

‘The Business Partners Limited Green Fund seeks to develop, grow and invest in sustainable businesses, enabling them to capitalise on opportunities in the green economy – especially in the clean and green technology, renewable energy, recycling sectors – and deliver on its inherent job and wealth creation potential.’

The fund will look at SMEs ranging from renewable energy providers to energy or emissions savings product and service providers, to recyclers, waste managers and green building service and product providers.

‘South Africa is one of the world’s most carbon-intensive economies, reported to account for nearly half of Africa’s carbon emissions, and the 12th-largest carbon emitter globally,’ said Martin. ‘Given its rich alternative energy sources, the country has the potential to reduce its unsustainable levels of carbon emissions through increasing the renewable component of its energy supply mix. And the knock-on effect for economic growth and job creation from investing in these new alternative energy sectors will be substantial.’

To Martin’s point, SMEs make up an estimated 91% of formalised businesses in SA and contribute more than 60% of new jobs created. 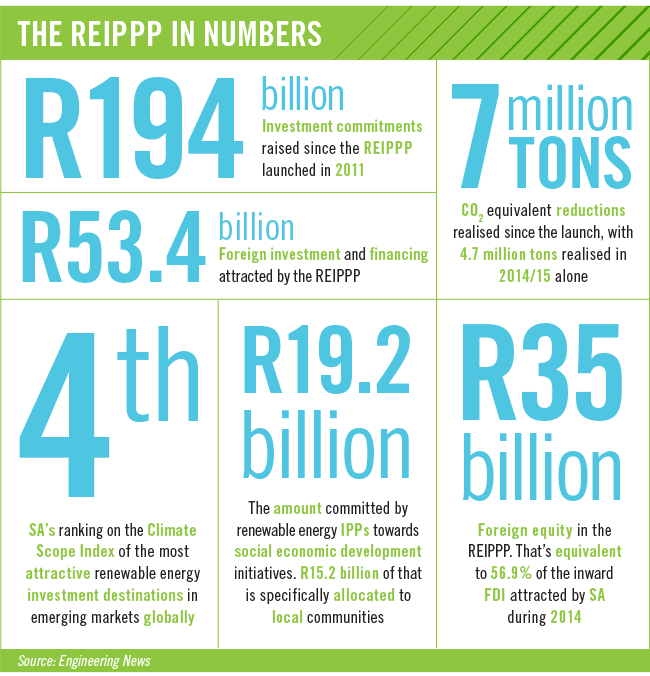 ‘SMEs are a vital contributor to the country’s GDP and employment,’ he said. ‘We believe by equipping SME entrepreneurs to thrive in the green economy, we can enhance their contribution to the economy and the environment.’

Meanwhile, Property Point (a Growthpoint Properties initiative) has seen more than 100 businesses participate in its two-year programme, which aims to generate procurement opportunities for SMEs and boost their ability to create jobs. The programme has already generated in excess of R451 million in procurement opportunities for participants. Property Point claims that these participants have reported revenue growth of up to 54.5%.

Speaking ahead of the 2016 Green Building Convention, held in Sandton this past July, Growthpoint Properties head of CSR Shawn Theunissen said: ‘Green building in South African property has grown exponentially and as a result, we have seen the demand for eco-friendly, resource-efficient development, management and maintenance of buildings in the industry increase too. This in turn provides numerous opportunities for innovative small businesses to make their mark on the property industry.

‘However, finding real procurement opportunities can often prove challenging for them, and so by giving entrepreneurs […] access to decision-makers who are looking for sustainable solutions from sustainable businesses, we give them a greater chance to realise their full potential.’

While these funding programmes, of course, provide a huge helping hand to SA’s candidate SMEs and ‘ecopreneurs’, there’s a bigger benefit to the country as a whole.

Before that solar farm was built, De Aar was – from an enterprise development point of view – a quiet town with a railway station, a lot of sunshine and little else. Now, as the town reaps the benefits of the green economy, more than R24 million will be spent by the end of this year on further economic development projects – including community training centres and free WiFi for the entire town. The future, it seems, is very bright indeed.