AT THE READY - JSE MAGAZINE

A passive investor who bought Anglo American shares in London at the beginning of 2015 would have seen the value of that asset plummet 75% by the end of the year. But if they had held on, those same shares would have increased sevenfold in value over the course of 2016.

Anglo’s development is one of the most radical examples of the general manner in which mining companies have responded to the fall in commodity prices since mid-2014. They have been forced to cut debt and improve operational efficiencies. Most are now positioned to take advantage of any rally in commodities. Their debt-restructuring processes have also seen a plethora of opportunities for those who were not so burdened by debt in 2014 and 2015 – notably Sibanye Gold.

There are signs that the commodity market has bottomed out and that prices can be expected to keep improving. The oversupply that has bedevilled prices in the last two-and-a-half years is unwinding, although the situation varies from one mineral to another. Nevertheless, at the end of November 2016 Reuters was able to report that international money managers were in the process of building long positions in industrial metals such as copper, aluminium, zinc, lead and tin. But this doesn’t mean the markets expect a rapid surge in prices. The super-cycle upswing of 2000 to 2014, based on China’s industrial growth, was most likely a once-in-a-lifetime event. The new normal will probably see small gains and losses in much more narrowly defined markets.

The price of copper, still the leading barometer of industrial demand, rose in November (by 5.5% to $2.2 per pound), probably because of an uptick in Chinese housing demand. But it isn’t expected to maintain its gains throughout 2017, let alone recover to the halcyon days of $4.50-plus prior to 2012.

In a similar way, the gold price has fluctuated in a narrow band, behaving just like the refuge from global political and economic risk it is. It spiked after the Brexit vote and again after the election of Donald Trump in the US. But on neither occasion did the surge last long.

The uncertainty associated with this ‘new normal’ has implications for the outlook of mining companies. First, they are watching metal prices much more closely in order to judge when to commit cash. And second, with a ‘wait and see’ attitude dominating, the receptiveness of national regulatory frameworks is more critical than ever.

In December 2015, Anglo American announced a radical restructuring across its global operations. The company said that it would reduce its global workforce from 135 000 to 50 000; not be paying a dividend; and sell about 60% of international assets, retaining only the most viable. 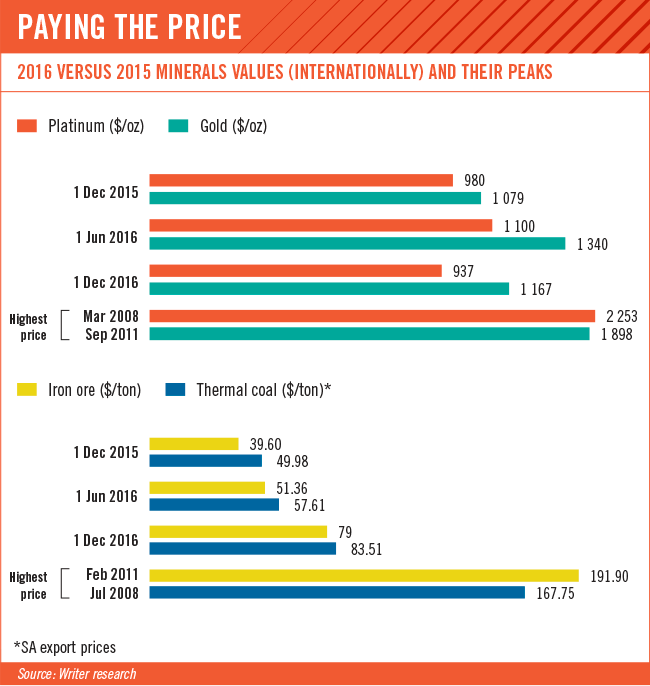 At the time, Anglo’s mostly widely referenced shortcoming was the massive debt incurred when it expanded into Brazilian iron ore through the acquisition of the Minas-Rio mine in Brazil for $5.1 billion. That operation lagged behind schedule and soaked up another $9 billion in development costs. The company had major assets in all four of SA’s main mining commodities – gold, platinum, coal and iron ore.

All this has now changed. Not only has Anglo retained just one asset in the SA platinum sector (the highly mechanised Mogalakwena opencast mine) but it has exited some of the coal sector too via the sale of its minority stake in the black-owned Exxaro Coal for about R3 billion. The company has also been looking for a buyer for Kumba, its Sishen-based iron ore mine.

Kumba breaks even at $34/ton – a price only briefly touched even at the very depths of iron ore’s international bear market. And like Minas-Rio, the major capital expenses and operational improvements are now a thing of the past. In late 2016, there were signs that Anglo is rethinking its strategy and in no hurry to dispose of Kumba.

Iron ore plunged to its lowest price in many years – $37/ton in December 2015 – but has recovered to prices of from $70 to $80 in the last two months of the year. This suggests a ‘wait and see’ attitude may well turn out to have been wise.

Another firm that has restructured and recovered in spectacular fashion is Ivan Glasenberg’s Glencore. The Swiss-based mining company had incurred a debt mountain even bigger that Anglo American’s ($30 billion) during an aggressive expansion drive in the boom years. When commodity prices plummeted there was serious talk of Glencore not surviving the crisis and being forced to file for bankruptcy. But that was underestimating Glasenberg, one of the canniest operators in the business.

In addition to selling assets for up to $5 billion, Glencore launched a strategy of ‘shuttering’ (closing down) production to push up the prices of zinc and copper. Where a player is big enough, such a strategy can shift the market, as demonstrated by Saudi Arabia in the case of oil. The results were spectacular. The day after Glencore announced it was to halt 4% of the world’s zinc output, the metals price in London jumped 10%.

Debt restructuring for the big international miners has been an opportunity for more locally focused firms. Sibanye Gold made a stir when it bought Anglo’s Rustenburg assets recently. The deal was completed on 1 November when the company took ownership, control and management of the Bathopele, Siphumelele and Thembelani operations as well as two concentrating plants, an on-site chrome recovery plant, the Western Limb tailings retreatment plant and surface infrastructure.

Sibanye Gold is committed to the SA jurisdiction. From its origin in four old, marginal gold mines, spun-off out of the Gold Fields group in early 2013, it has now expanded into platinum – and the company has also been investigating acquiring coal assets. 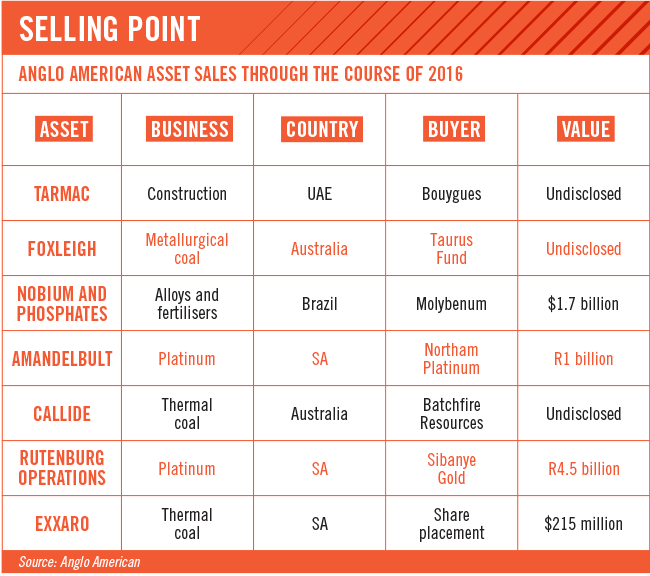 Another Anglo Platinum asset, Amandelbult in Limpopo, has been sold to Northam Platinum.

Acquisitions and expansion are, however, being held back by uncertainties over the broader enabling environment in SA. Both the Minerals and Petroleum Resources Development Act and BEE Charter are being reformulated by the Department of Mineral Resources (DMR). The Chamber of Mines, however, claims it is not being given the opportunity to provide what it considers to be sufficient input into the process.

As a result, many miners are adopting a ‘wait and see’ attitude. Graham Schwikkard, consultant at Datta Burton & Associates, says capital investment in SA’s mining industry is especially low at the moment, adding that Stats SA data, adjusted for inflation, shows a halving of capital expenditure compared to 2008. He adds that the current capital/depreciation ration is below parity – the rate required to simply replace existing capital – and, at present, ‘companies are only looking to maintain or run down their assets’.

Mining is a long-term game with lead times measured in years. Schwikkard argues that this is the reason the decline has not shown up sooner. ‘Committed capital from old projects held [the ratio] higher [until the second half of 2016].’

Other aspects of the industry are, however, looking more positive. It seems that the labour disputes of recent years have been headed off by the generous (10% per annum) three-year wage settlements negotiated by the industry in 2015, and there is every chance of stability continuing in 2017.

Mine safety stoppages – something the industry has been vociferous about – may be about to become less heavy-handed. A recent judgement, in favour of AngloGold Ashanti and against a regional (North West) office of the DMR, was made over a shut-down ordered in terms of Section 54 of the Mine Health and Safety Act.

This is the legislation that allows the closure of an entire mine when often minor safety violations are identified in one part of its operation.

Miners have long argued that the mines inspectorate could utilise the much lighter touch of Section 55, where necessary. That regulation requires that only the affected part of the mine be closed, not the whole operation. Anglo American’s Stewart Bailey argues that the industry has ‘no issue with enforcing safety’ but that in gold mining, 70% of costs are fixed.

‘These are incurred even when the mine is standing still,’ says Bailey. The Chamber of Mines argues that stoppages cost R4.8 billion in lost revenue in 2015.

The judgement in the Johannesburg Labour Court in November 2016 essentially reins in the department’s regional offices, which have – in the industry’s opinion – been far too gung-ho in implementing this regulation.

At the beginning of 2017, the SA mining industry is sitting a little uneasily, watching developments in both commodity markets and the enabling environment. But restructuring since the commodities downturn has strengthened the industry, rendering it ‘lean and mean’.

Favourable developments in either of these exogenous conditions may see a rapid response from the industry.