Recent developments around employee health and safety (such as the class-action settlement agreement with mine workers who had contracted compensable diseases on SA mines), an increase over the past year in the number of mining accidents (after declining for close to a decade), as well as other safety-related incidents in different places of work in the country, have again put the spotlight on the current set of laws that govern occupational health and safety for workers.

Richard Spoor of law firm Richard Spoor Inc explains that health and safety law emanating from the workplace is a complex area that incorporates various other intersecting fields, including mining law, environmental law, medical law, information law, administrative law, constitutional law, the law of delict and even consumer law. He says numerous disciplines or experts are involved, from lawyers to medical practitioners, occupational hygienists and engineers. ‘A failure to ensure good health and safety protocols is also regarded by our courts as a breach of several constitutional rights, including but not limited to the right to be free from all forms of violence from private sources – Section 12(1)(c) – and the right to an environment that is not harmful to their health or well-being – Section 24(a),’ says Spoor.

He explains that at present, employee health issues are typically divisible into prevention and restitution issues at their core, though this division is in itself misleading and unhelpful. In the mining and work sector, the Mine Health and Safety Act (MHSA) – together with its regulations – governs the dos and don’ts regarding safety issues. The other sector employers are regulated under the older Occupational Health and Safety Act (OHSA), and its regulations. ‘The two statutes, however, are not entirely parallel and separate, and should be considered together in certain instances where the one contains specific regulations [and] the other does not. These statutes generally try to ensure prevention of injuries and diseases, and include the formation of various inspectorates under the Department of Mineral Resources and the Department of Labour. ‘These two frameworks are far from satisfactory from either an industry or a worker’s perspective, and they contain numerous and often frustrating problems within their provisions and their implementation. For example, prior to the matter of Industrial Health Resource Group vs Department of Labour, inspectorate findings on the cause of serious workplace accidents that resulted in employee deaths were “classified”, defeating the entire point of the statute to prevent further problems. Where these two statutes are complex and problematic, the restitution statutes are infinitely more so,’ he says. 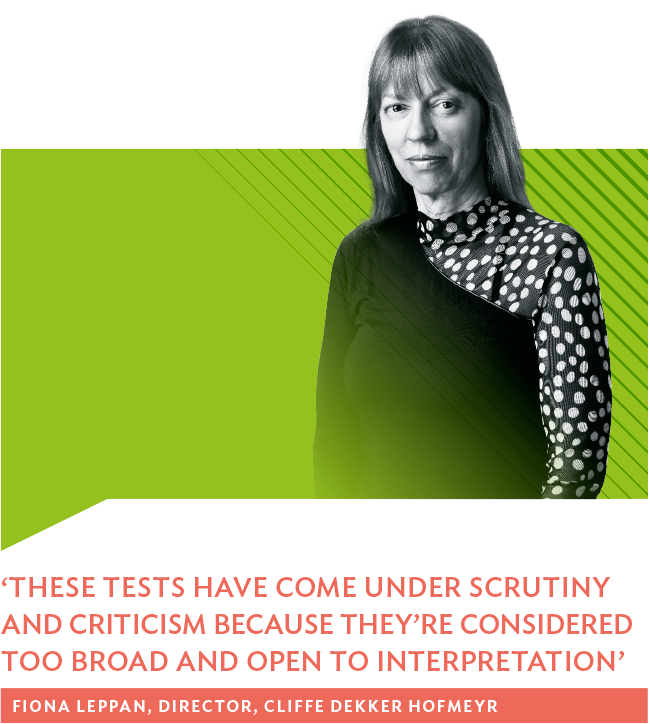 Fiona Leppan, director at law firm Cliffe Dekker Hofmeyr, says international trends are likely to influence legislative changes that are currently under review in SA. In 2017, for instance, the introduction of the Singapore Accord (on the standards of OHS professionals) represented a call to action to encourage safety organisations internationally to endorse their commitment to upholding and standardising health and safety regulations. ‘The objective is a greater universal standardisation for health and safety, representing an overall positive transformation in workplace safety and compliance,’ she says.

This view is backed by Warren Beech, partner and head of mining at Hogan Lovells, who says a balance between worker safety and the need for companies to remain competitive is being achieved organically, as a result of changing sentiments and approach to compliance globally. ‘This is the appropriate method of achieving balance, organically and dynamically, rather than being forced through legislative changes. Organic change is generally more successful because it tends to be based on the buy-in of all relevant stakeholders.’

Beech says there have been ongoing debates regarding whether the mechanisms and structures under the OHSA and MHSA are too rigid, and do not achieve the intended purpose. ‘In relation to the MHSA, mining companies have repeatedly requested greater flexibility and self-regulation. These representations have largely been successful, and the MHSA and its regulations provide for self-regulation in several respects, including the hazard identification and risk assessments [HIRAs] that must be carried out, and the various measures to be implemented to address the identified hazards and the assessed risks, so as to ensure that incidents and accidents do not occur, and so that persons are not exposed to hazards to their health.’

On the other hand, Beech adds, the Mine Health and Safety inspectorate has argued that self-regulation has not worked, citing the recent upward trend in fatal accidents on mines as proof of this. ‘In the years there was an improvement, the Mine Health and Safety inspectorate generally argues that this resulted from increased enforcement by the inspectorate, including the issuing of the stop notices under Section 54 of the MHSA. ‘The health and safety of workers needs to take absolute priority, and profits cannot overshadow health and safety. Where companies are not profitable, this tends to have a significant impact on health and safety in the workplace because this inevitably results in restructuring – with the consequences that flow from this, such as disruption to working rhythms, reduced supervision, reduced number of employees in a crew, and so on.’

However, Beech points to a significant change over the past 18 to 24 months, whereby investors are increasingly basing decisions on health, safety and environmental compliance, and in many instances, with full acknowledgment that profits may be impacted by compliance. ‘Even if stakeholders do not subscribe to compliance with the MHSA and OHSA on moral or legal grounds, most mature stakeholders, including companies, employers and investors understand that the fallout from a single fatal accident can be extensive, not only to the bottom line but also reputationally.
‘Also, many of the accidents and fatal accidents in the mining sector can be attributed to non-compliance with the provisions of the MHSA or OHSA, the regulations, and the extensive health and safety systems that are implemented in support of compliance with the MHSA and OHSA.
‘Both the MHSA and OHSA provide good frameworks for compliance, including appropriate self-regulation and flexibility. The emphasis needs to shift back to basics, ensuring that persons at all levels – at mines or other workplaces – understand why something is being done, in addition to being trained on what has to be done,’ says Beech. He adds that ‘understanding why a particular risk assessment is necessary, or why compliance with a particular rule is critical, is essential to improved compliance with both the MHSA and OHSA’. On the positive side, SA has pioneered other aspects that should address workers’ health and safety in some way. In 2011, says Spoor, Regulation 28 of the Pension Funds Act was introduced, which now requires such funds and their boards to ‘at all times before making an investment in and while invested in an asset, consider any factor that may materially affect the sustainable long-term performance of the asset including, but not limited to, those of an environmental, social and governance character’.

SA courts have already recognised and interpreted that health and safety risks constitute an environmental, social and governance issue. This means pension funds are obliged to not only look at the green policies of the companies they invest in but also the health and safety record behind them, says Spoor.

Leppan says SA’s OHSA is being ‘substantially’ amended but that no draft documents have yet been released for public comment. She adds that there’s a debate that the law should revert to a system of ‘strict liability’ but this may have severe consequences for employers. This is because, in the event of an incident, an application of strict liability might impact an employer being able to lead evidence that it did not act unlawfully, which could be a different regime with a different focus in terms of enforcement.

She adds that one should bear in mind that from more latterly, SA legislature adopted two mechanisms to balance the tension between the pursuit of economic objectives and the attainment of health and safety measures. This has been achieved through the application of the reasonable practicable test and an application of the cost-benefit analysis. It requires employers to impose a measure of self-regulation in applying a general legislative framework of health and safety duties, and obligations at the workplace. The feasibility and cost of imposing such measures is a component of determining to what extent a risk can be eliminated or satisfactorily controlled.
‘Both these tests have come under scrutiny and criticism because they are considered as being too broad and open to interpretation, which makes it possible for wrongdoers to avoid liability.
‘The law enforcement authorities – notably the chief inspectors – issue mandatory guidelines for the implementation of compulsory codes of good practice. This sets formal procedures on how hazard identification [and] risk assessments should be performed, and it requires employers to adopt such guidelines and apply them,’ according to Leppan. ‘The significant administrative fines and risk of prosecution are seen to act as deterrents to safety infringements.’