Tracing its roots back to the mid-1800s, Fasken has more than 150 years of mining industry experience. The company is also consistently recognised for having a greater number of mining and mining finance experts than any other law firm.

Fasken’s combined team of lawyers offer unrivalled expertise in industries that are important to developing economies, including – but not limited to – capital markets, banking and structured finance, mining, energy, infrastructure and projects.

EXPERIENCE AND EXPERTISE
Based on their understanding of African cultures, legal systems, regulatory and economic environments as well as local markets, Fasken has advised both governments and private parties involved in major energy financing projects, mining, infrastructure, privatisation and regulatory reforms, and telecoms.

The firm understands Africa’s corporate laws and brings expertise dealing with the Organisation for the Harmonisation of Business Law in Africa; Economic Community of West African States; Common Market for Eastern and Southern Africa; Central African Economic and Monetary Community; West African Economic and Monetary Union; and other bodies of regional laws governing business on the continent.

Clients benefit from the commercial, proactive and efficient approach the company uses to help manage the completion of mining transactions in Africa. Whether clients are at the exploration, development or mining phase; need to secure financing; or plan to acquire other companies, Fasken’s global mining group has the richest source of experience and international prestige available. 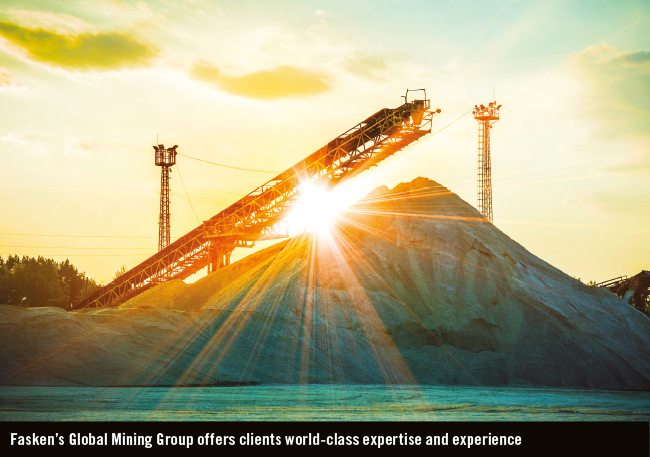 Mining contacts
Leading mining producers retain Fasken regularly for M&A and mining transactions, giving the firm a keen understanding of its long-term commodity outlooks, views on developing countries and other business insights. The firm’s most active client base gives it an understanding of the challenges of raising capital; exploring and drilling for new discoveries; permitting/building/expanding mine operations; negotiating offtake arrangements; and developing/implementing closure plans.

Access to financing
The firm’s ability to make introductions to financial institutions and investment banks has proven invaluable to its clients. Fasken has acted for most of the world’s leading banks and brokers in Canada, Europe and Africa, and is the only law firm to rank among the top 10 law firms for financing and new listings on both Toronto’s TSX and London’s AIM. The firm’s strong team in Johannesburg also facilitates transactions involving the JSE and NYSE Euronext.

Global reach
As the only law firm with offices in the world’s key mining finance centres (Toronto, Vancouver, London and Johannesburg), Fasken addresses the international dimensions that characterise many mining industry transactions. 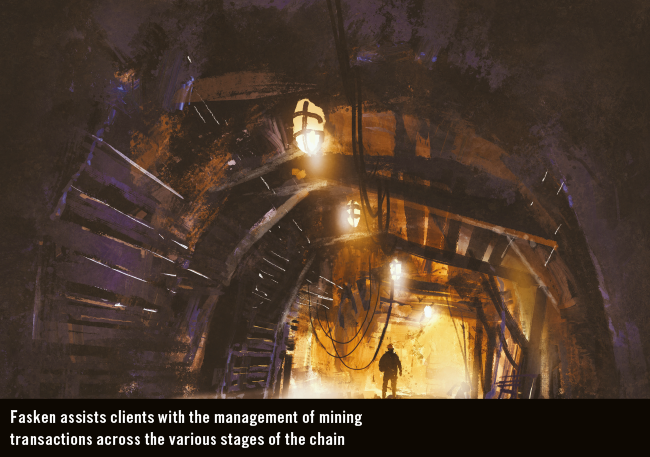 SERVICES
At Fasken, they work with their colleagues across the firm to help clients succeed. The Johannesburg offices are located in Sandton, home to the JSE and the location of many corporate and investment banks, global audit firms and the regional headquarters of many international businesses.

Fasken is able to serve clients in English and French, and in all of SA’s official languages. The company advises on:

RANKINGS AND RECOGNITION
Among the most highly qualified in the world, the firm and its lawyers are recognised by leading legal directories, having been named ‘Global Mining Firm of the Year’ by Who’s Who Legal nine times. The breadth of Fasken’s international reach was also recognised by Chambers Global, ranking its Canadian and Latin American mining practices in Band 1.