Setting the bar in terms of distinction within their fields, these young and dynamic CAs(SA) are the top three of SAICA’s Top 35 Under 35.

Faraimose Kutadzaushe – 32, founding director of Supreme Brands/investment, specialist at investec asset management
In 2008, Faraimose Kutadzaushe achieved his dream of becoming a chartered accountant by qualifying with results that placed him in the national top 10 candidates in Zimbabwe. Not wasting any time, he immediately sat for the examinations to convert his qualification into a CA(SA).

‘I was fortunate enough to land a secondment to work at Deloitte in Philadelphia for three months, during which I invested a lot of time in learning about the various MBAs that were offered in the United States,’ he says.

In 2010, at the age of 27, Kutadzaushe partnered with three friends to form Supreme Brands, a company that manufactures toilet paper products in Zimbabwe. They aimed to make a difference by creating employment much needed in the economy.

‘My dad had recently passed away, so my mother provided my friends and I with a great support structure that made the formation of this company a success. She picked up the reigns and operated the business as its CEO. Supreme Brands quickly gained traction and, two years later, I decided to fulfil my “note to self” by applying to a business school.’

Kutadzaushe was accepted to Stanford Business School. He received a merit-based scholarship from Goldman Sachs, an investment bank that he subsequently joined after graduating. 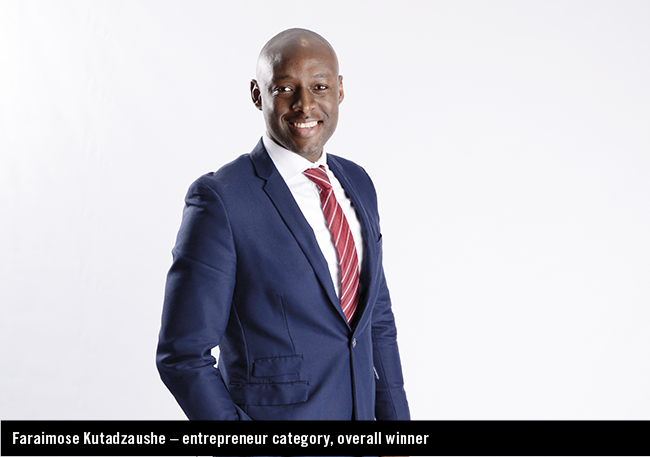 While at Goldman Sachs, he worked as a senior associate in the San Francisco office where he advised large multinational companies on multibillion dollar M&A, IPO and debt transactions.

Meanwhile, Supreme Brands was invited by N-Richards – Zimbabwe’s largest wholesale group – to be admitted into its selective supplier development programme as a leader in the toiletry segment in all of the group’s 26 outlets. Supreme Brands currently supplies leading retailers in Zimbabwe and occupies more than 80% of the nationwide toilet paper shelf space across retailers. It also manufactures the house brand of OK Zimbabwe, one of the country’s largest retailers. The company currently employs 77 people and has generated revenues in excess of R70 million since inception, with the bulk of this over the past two years. Kutadzaushe is also a CFA charter holder. 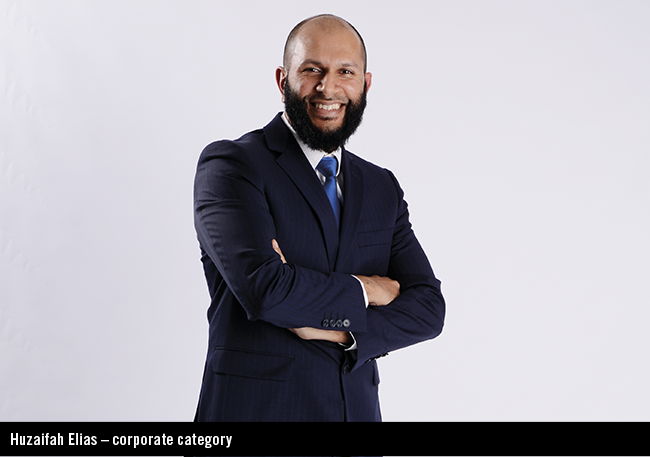 Huzaifah Elias – 34, director: Africa Operations GUD Holdings
Following a highly successful tenure in the commercial and technical finance field at GUD Holdings, Huzaifah Elias was entrusted with the strategic initiative of expanding the group on the African continent. As director of Africa operations, he has built up complete operating businesses in some of the most difficult countries – including Mozambique, Zambia and Nigeria – and expanded into more than 10 countries.

With a return on investment greater than 150% per annum, exceeding profitability targets and doubling revenue, the results have been outstanding.

Through knowledge garnered as a CA(SA), Elias has developed various platforms to manage forex risk, which has earned the group millions of rands. What’s more, Elias has learnt Portuguese in order to operate in lusophone Africa, and he has a working knowledge of French for operating in North Africa.

Upliftment of the poorest in Africa through automotive education and training is close to his heart and this has been rolled out across Africa. Elias also oversees the Zimbabwean manufacturing plant and chairs the board of directors in Mozambique, Zambia and Zimbabwe.

Nico van der Merwe – 35, associate professor in financial reporting, North-West University
In a career marked from the very start by various accolades and achievements, during his training contract Nico van der Merwe achieved the highest ratings for his performance. Thereafter he joined the academic staff of North-West University (NWU), where he quickly progressed to being the subject head and later leader of the CA(SA) programme.

At the age of 26, he was promoted to associate professor in financial reporting, and awarded the Absa bronze medal for best masters student in social sciences at NWU.

Other achievements include an award for best lecturer at NWU in 2008 and, in 2010, the institutional award for excellence in research and Rapport faculty award for inspirational education. 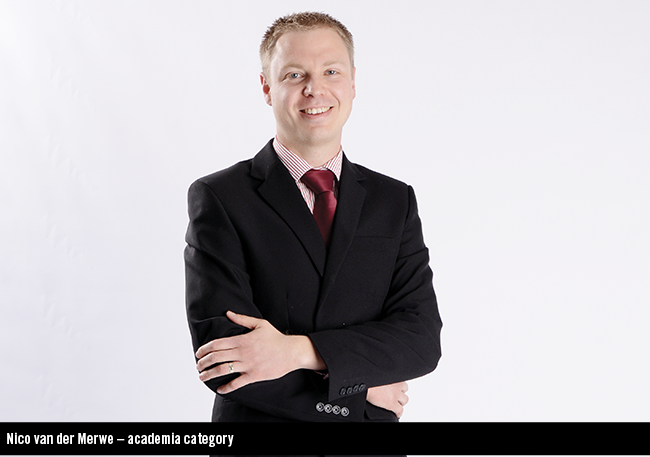 Van der Merwe holds a PhD with which he has made a significant contribution to improving and transforming the education of CA(SA) students. He has also published various articles in national and international journals.