Bonds are fixed income instruments that represent borrowings, in other words a loan, to a government or a company. They are used by governments, entities of governments or companies to finance operations or projects and are issued for a fixed term. Bondholders are effectively creditors of the issuer of a bond and typically buy a bond to receive the yield (or interest) thereon, as well as a final repayment on maturity. The prices of bonds are inversely correlated with interest rates. Therefore, when rates go up, bond prices fall (and vice versa).

The JSE operates a secondary market in bonds where investors are able to buy and sell bonds among each other. The institutions that trade in this market include non-resident entities as many global players invest in SA bonds. In recent years, as the country’s sovereign credit rating has declined, its bonds have been seen as ‘riskier’ and have generally dropped in price. The trading by non-residents in SA bonds is carefully tracked by many market participants, explains Mark Randall, Director: Information Services at the JSE. This data has been published by the JSE on a daily and monthly basis for a number of years. In January, the JSE launched a new, enhanced report on bond transactions by non-residents. ‘The introduction of the settlement-based reporting on non-resident transactions is our first market data product that combines trading data and settlement data to provide deeper insight into non-resident activity in our markets. This report focuses on settled trades rather than reported trades and complements the existing transaction-reporting approach by aggregating the total non-resident purchases and sales of bonds that settle on any given day, regardless of when the original trade was confirmed or reported. This will provide a more accurate view of flows, which will be of benefit to analysts and other market participants.’ 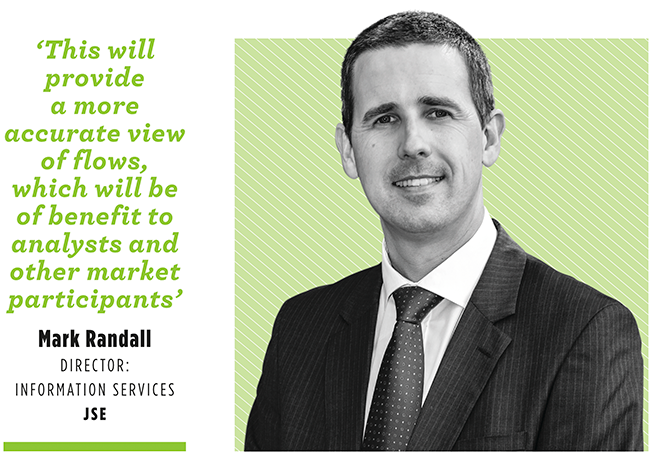 In terms of holdings, non-residents held 37% of government-issued bonds at the start of 2020. At the end of 2020, this had decreased to 30%. Randall says this change during last year was driven mainly by two factors, namely ‘non-residents in aggregate selling out of some of their RSA government bond holdings’, as well as ‘government raising new debt through the issue of bonds, with less take-up seen by non-residents relative to locals’.

When including non-government bonds, such as those from state-owned enterprises, municipalities and corporates, the percentages of foreign holdings are slightly lower as non-residents are less likely to purchase these types of bonds.

Due to global volatility linked to COVID-19, March saw the largest sell-off of SA bonds by non-residents, with a net sell-off of R53 billion. This trend continued in April, May and June, with a further R32 billion of net sales over those three months. However, ‘foreigners were net purchasers of South African bonds in seven months during 2020. It was definitely a “tale of two halves”, with R66 billion in net sales in the first half and R51 billion in net purchases in the second’. Total net sales by non-residents for the year was R15.2 billion.

According to Randall, other factors aside from COVID-19 drove non-resident interest in the market. These include SA’s credit ratings, as well as other macroeconomic factors namely, the amount of new bonds issued and total indebtedness of government. The prevailing bond yields, interest rates and inflation levels also contributed to the trade activity.