The rand is one of the most traded currencies in the world, with the Bank of International Settlements’ Triennial Central Bank Survey ranking it 18th globally in 2019. It – along with currencies such as the Mexican peso, Russian ruble, Indian rupee, Turkish lira and Brazilian real – is often seen by investors globally as a proxy for emerging markets. This liquidity regularly means volatility – the currency can appreciate on one day and weaken the next, as it mostly takes its direction from sentiment offshore.

Elaine Mabiletsa, Manager: Currency Derivatives at the JSE, says that ‘as a free-floating currency, the rand’s value in relation to other currencies is determined by demand and supply – strengthening when its demand increases and depreciating when its demand drops. These fluctuations, and sometimes relative stability, in the value of the rand may require companies, investors, traders, importers and exporters to use foreign exchange derivatives to hedge themselves against the volatility’.

Currency derivatives are effectively a type of insurance cover that enables those who require foreign exchange to protect themselves against currency risk, explains Mabiletsa. ‘This management of exchange-rate risk is a critical tool that is essential for any organisation – local or multinational –focused on stability or growth.’ Aside from the management of risk, currency derivatives also provide traders an opportunity to speculate on movements in the underlying foreign exchange rates.

The JSE’s currency derivatives platform was launched in 2007 and allowed for the trading of currency futures and options on the exchange. Previously, these were only available on over-the-counter markets. According to Mabiletsa, the JSE’s platform ‘provides market participants with a transparent and regulated trading environment that does not require Reserve Bank approval and complicated paperwork for entering and exiting trades’. She adds that all the trades executed through the JSE are matched daily by the exchange’s world-class clearing house, JSE Clear, which acts as a counterparty that ensures every derivative contract traded is, in fact, settled. 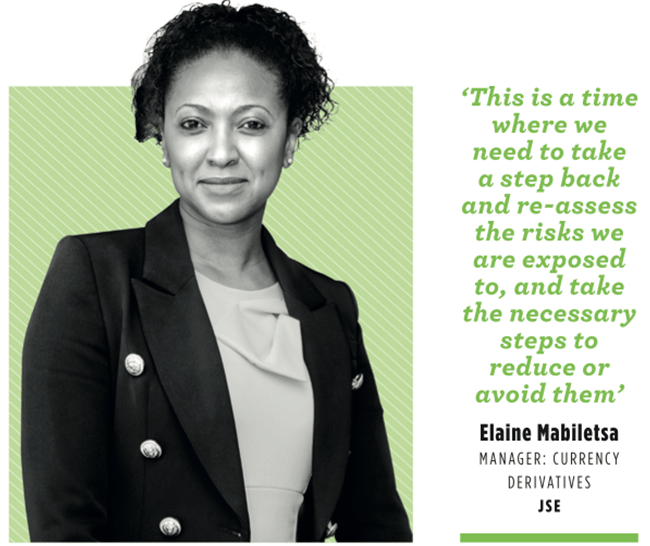 ‘The most commonly traded foreign exchange derivative is the futures contract, which enables a user to buy or sell a specific quantity of foreign currency at a predetermined exchange rate at an agreed point in the future,’ says Mabiletsa. ‘On the other hand, currency options grant the purchaser the right but not the obligation to trade a currency at a predetermined date in the future at a pre-arranged price, regardless of where the underlying market is trading.’

The buyers of currency futures are typically importers as they would require certainty on the future value of the currency. Practically, these buyers generally agree to purchase US dollars and sell rands at a point in the future, with the objective of locking in a specific exchange rate and without taking physical delivery of the foreign currency, says Mabiletsa.

The JSE offers a range of currency derivatives, tracking the rand-exchange rate to the US dollar, euro, UK pound, Australian dollar, Japanese yen, Swiss franc, Botswana pula, New Zealand dollar and Canadian dollar, among others. These are offered across both futures and options contracts, and the exchange allows buyers to select a bespoke expiry date, known as an Any Day contract. The JSE also enables investors to create a bespoke option, which allows for the listing of strategies to meet the risk being hedged.

‘The COVID-19 pandemic has highlighted to the world the importance of being prepared to protect your business in the event of unforeseen developments. The financial impact experienced by individuals and companies alike due to the pandemic has left an indelible mark across the globe,’ says Mabiletsa. ‘With the pandemic still hanging over the global economy and delays in vaccine roll-outs, there is no telling how the global economy and currency markets are going to be impacted. This is a time where we need to take a step back and re-assess the risks we are exposed to, and take the necessary steps to reduce or avoid them.’