SPACs are growing in popularity

US SPACs raised a record $76.2 billion last year, which was up 557% from 2019. ‘In fact, SPAC stocks have delivered average annualised returns of some 17.5% since 2015,’ says Patrycja Kula-Verster, Primary Markets Business Development Manager: Equities Department at the JSE. ‘The explosive growth in these “blank-cheque” entities, which exist solely to acquire other companies, has provided a way for sellers and an efficient way for private companies to tap into public equity markets.’

SPACs are non-operating, publicly listed companies set up with the objective of identifying and purchasing a private company, thus enabling the acquisition target to have publicly listed stock.

‘In essence they are a corporate shell,’ says Kula-Verster, adding that they’re actually initial public offerings (IPO), but in reverse. ‘When a SPAC purchases a private company, it acquires that target company and becomes an operator of the underlying asset. The SPACs are typically led by management teams with strong experience in a certain industry, and they usually have two years to find a target and close the deal, and realise their promises.’

The typical life-cycle of a SPAC comprises its creation, new listing/IPO, target search, voting, acquisition and operating company. They aren’t simple mergers and require a comprehensive understanding of all their intricacies, which, says Kula-Verster, can be daunting. ‘Most importantly, a company going public via a SPAC must meet the same extensive regulatory requirements as those taking an IPO path, but in only a matter of months – not the year or two that a typical IPO takes.’

SPACs typically find success in the renewables and technology sectors, but given the advent of the COVID-19 pandemic last year and the changes it manifested in economies, there are now more opportunities for buying up assets across a vast array of industries. 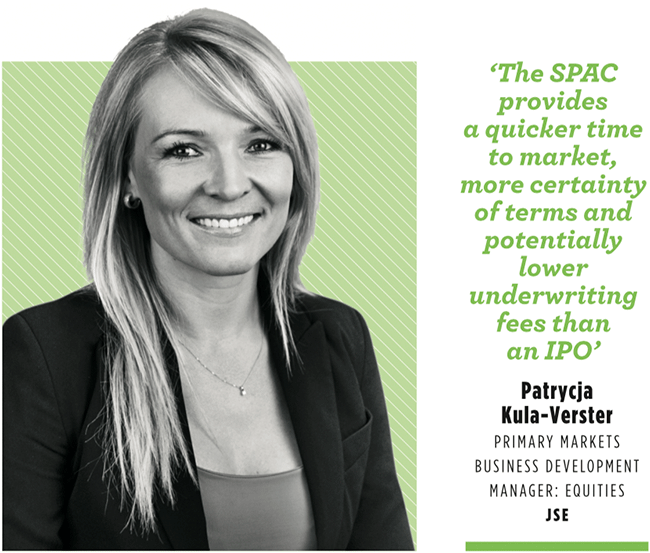 According to Kula-Verster, the proof is in the increase in enquiries the JSE has had for more information on SPAC listing requirements. ‘Yet it’s not just the listing that needs to be kept in mind, but also the current market sentiment and appetite for specific sectors from investors,’ she says. ‘Common targets for SPACs currently include companies held by private-equity funds, corporate spin-offs and, occasionally, family-owned firms with significant operations and professional financial reporting and internal controls.

‘Going public by merging with a SPAC rather than launching an IPO or new listing is worth considering for an increasing number of private companies,’ says Kula-Verster.

Those companies are exposed to several unique benefits, such as limited downside risk for initial participants and access to pre-IPO/listed companies, but these come with a variety of risks. ‘Indeed, at the time of the initial listing, investors know little about the company they will ultimately own, and therefore place a lot of faith in management to find a suitable target and reach a quality deal. Yet, for those targets, the SPAC provides a quicker time to market, more certainty of terms and potentially lower underwriting fees than an IPO.’

Also considered a risk, but with a positive protective spin, is that the JSE holds the money in escrow, which incorporates regulatory safeguards that help protect all parties throughout the SPAC process. ‘Should the SPAC fail to make the acquisition, the funds are returned to shareholders.’

The JSE has facilitated R3 billion for eight SPACs to date and, says Kula-Verster, while the SPAC market may become over-saturated elsewhere in the world at some point in time, this is unlikely to happen in SA, ‘as we have much more runway in providing access to deep local and international-listed investment mandates. The JSE hopes to get more SPACs listed on the JSE and has been engaging with a number of market participants on the various opportunities in SA and abroad’.