The JSE will expand its current Green Bond Segment and introduce a Sustainability Segment in order to drive sustainable investment. Altaaf Aboo, Bonds Specialist in the JSE’s Capital Markets division, says ‘there has been a significant global trend towards impact investing, which is the ability to have a measurable non-financial impact along with a financial return on one’s investment.

According to Aboo, Green Bonds were the ‘natural first target’, because the risk of climate change has accelerated global flows into green activity such as renewable energy. Broadening this to a Sustainability Segment is the natural evolution of this model, he says.

Along with Green Bonds, the JSE’s Sustainability Segment will include two other instruments – Social Bonds and Sustainable Bonds. Aboo says this addition ‘will allow investors to know that their investments are going towards green, social or sustainable activities while making them a financial return’.

All three instruments are based on the same ‘use of proceeds’ model. ‘They look and act like a typical vanilla bond, except that the capital raised is earmarked for either green or social activities.’

Companies or institutions would use Green Bonds to raise capital for environmental projects. Although most automatically think of renewable energy, such as solar or wind plants, the proceeds from these bonds can also be used to improve current water infrastructure or reduce waste.

‘Social Bonds are used to raise capital for social initiatives, and the United Nations Sustainable Development Goals are a good guide to what the proceeds could be used for,’ says Aboo. 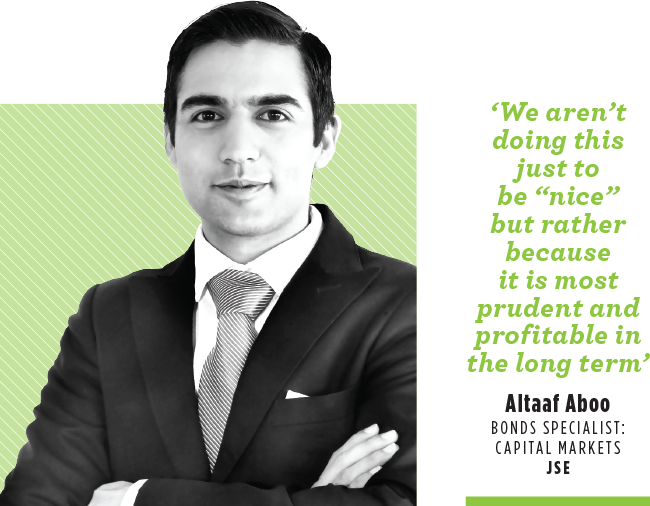 ‘Social initiatives don’t mean that these won’t achieve an equivalent financial return. There are many examples of great social investments in South Africa – particularly in low-cost housing, SME financing and schooling – that have proved to provide excellent returns while having a positive social outcome.’

Finally, capital raised in a Sustainability Bond would be used for a ‘mix of social and green activity’. An example of this would be a low-cost housing development with its own solar power and recycled-water plant, explains Aboo.

The trend towards championing sustainability has been in place at the JSE for a number of years. It was the first stock exchange globally to introduce a sustainability index. It did so in 2004, and this index measures companies on indicators related to environmental, social and governance practices. The JSE is a signatory to the UN-backed Principles for Responsible Investment, and it’s also a founding partner of the Sustainable Stock Exchanges Initiative. Its Green Bond Segment was launched in 2017.

Aboo points out that globally, green bond issuance has grown rapidly – it is expected to reach $500 billion this year from less than $50 billion in 2014. This year, social and sustainability bond issuance will reach $25 billion and $75 billion respectively.

‘Sustainable investing is critically important because eventually, the unsustainable activity will catch up to the world,’ he says. ‘If we are using resources that are in limited supply, polluting the environment we rely on or failing to develop the communities we live in, we will have to pay the price at some point.

‘When there is social upheaval or climate damage, this will hurt us in monetary terms. We aren’t doing this just to be “nice” but rather because it is most prudent and profitable in the long term to invest sustainably.’