TOOLS OF THE TRADE - JSE MAGAZINE

The JSE has a number of innovative instruments across its two major market segments, the equity market and the debt market. On the equity front, Thato Matsafu, Head of Primary Markets at the JSE, highlights five product suites, instruments or methods of listing on the local bourse.

He says that so-called ‘direct listings’ have received a lot of attention in recent years, particularly given that a number of technology companies have used this method of listing. Swedish streaming giant Spotify and messaging service Slack both went public on the New York Stock Exchange through direct listings in 2018 and 2019, respectively. In a direct listing, no new shares are created and only existing shares are listed. This enables liquidity and the introduction of new shareholders.

‘We have the same method of listing,’ says Matsafu. ‘We simply call it something different: listing by way of introduction. This has been in place since 2006 and, to date, we have had 140 companies listed in this way.’ Listing through this method enables company insiders to go public without necessarily diluting themselves, he explains.

Special purpose acquisition companies, or SPACs, have also been in the news, following some high-profile listings in the US this year. There, SPACs have raised more than $31 billion this year. Hedge fund manager Bill Ackman listed the largest-ever SPAC in July, raising more than $4 billion. Matsafu says SPACs could be considered ‘reverse initial public offerings’ as a cash shell is listed to raise capital. ‘The managers of these SPACs are then given 24 months to meet the acquisition criteria and buy viable assets with the raised capital.’

That these are in the spotlight now, he says, is a function of the economic cycle given that many asset prices are a lot more attractive following the impact of the COVID-19 pandemic. Eight SPACs have listed on the JSE in recent years with the majority of these still listed, having acquired viable assets. 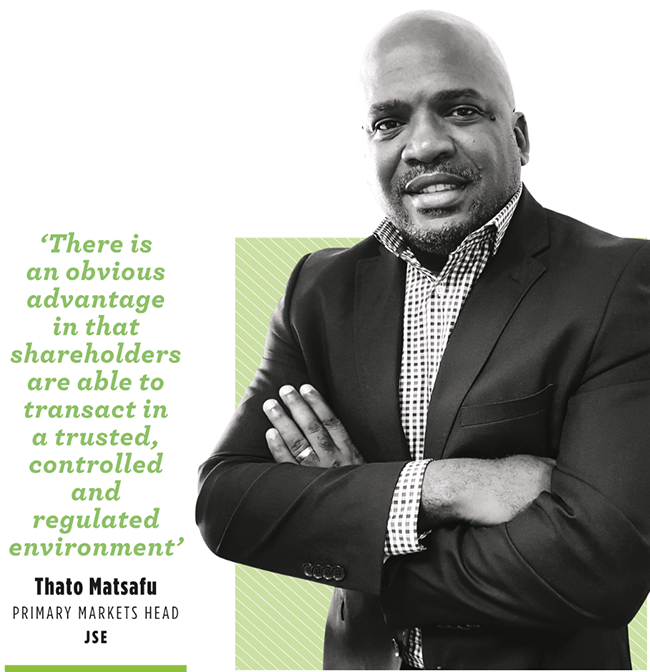 Earlier this year, the JSE amended its listing rules to allow the London Stock Exchange (LSE) standard-market companies to be eligible for a Main Board listing. Previously, they were only eligible for the junior board (AltX). Matsafu says this amendment is an addition to the JSE’s fast-track inward-listing procedure.

These LSE standard-market companies are now able to list on the JSE via an inward listing by means of an announcement only. Beyond this, says Matsafu, the JSE is focused on refreshing its empowerment segment. It enables a secondary market for shares that were previously traded on various over-the-counter platforms. Following a change in regulation, these shares must be traded on a licensed exchange.

The segment ‘was created to address the national agenda, in that it gives previously disadvantaged individuals access to capital markets by allowing them to buy and sell shares in empowerment schemes. There is an obvious advantage in that shareholders are able to transact in a trusted, controlled and regulated environment’, he says.

Similarly, the Section 12J regime also talks to the national agenda, according to Matsafu. Investors in this space are able to receive 100% tax rebates by investing in approved venture-capital companies. These, in turn, invest in SMEs, which is critical for economic growth as they are the biggest creators of jobs, he says.

Globally, IPO or listing activity has been subdued because of the environment, and ‘some issuers have postponed their listing plans given the uncertainty’, says Matsafu. ‘Once economic conditions improve, we will see confidence return to the market and those listing plans will resume.’