Since the JSE acquired the Spire Awards along with the Bond Exchange in 2009, it has regularly enhanced the spread of its asset class award categories. This year sees the inclusion of equity and equity derivatives asset classes, as well as additional categories being incorporated in the Commodities market, which was added just three years ago.

A further 2018 change is to the Spire Award process and auditing, with its management now being undertaken by Intellidex, which has acquired a reputation as an independent and credible leader in SA capital markets and financial service research.

Bernard Claassens, Acting Head: Interest Rate and Currency at the JSE, says that over the past nine years, the evolution of the JSE Spire Awards has been to ensure the development of a comprehensive range of asset classes and is in response to its reception by the capital markets. ‘It has become the benchmark by which capital market organisations can measure their key performance areas, elevated more so because entrants are voted for by the largest institutional investors in the country.’

Without the JSE Spire Awards, organisations would need to depend heavily on their one-to-one interactions to determine their service excellence levels. Based on their trading volumes and the votes cast, the JSE Spire Awards allow these organisations to compare their offerings with those of their peers. It makes for a very competitive environment but one, says Claassens, that is healthy.

‘In some cases we have seen organisations introduce subtle changes to their business to make it more relevant, in pursuit of JSE Spire Award status. Such changes are based on feedback they receive from their clients, who are the institutional investors with which they trade.’ 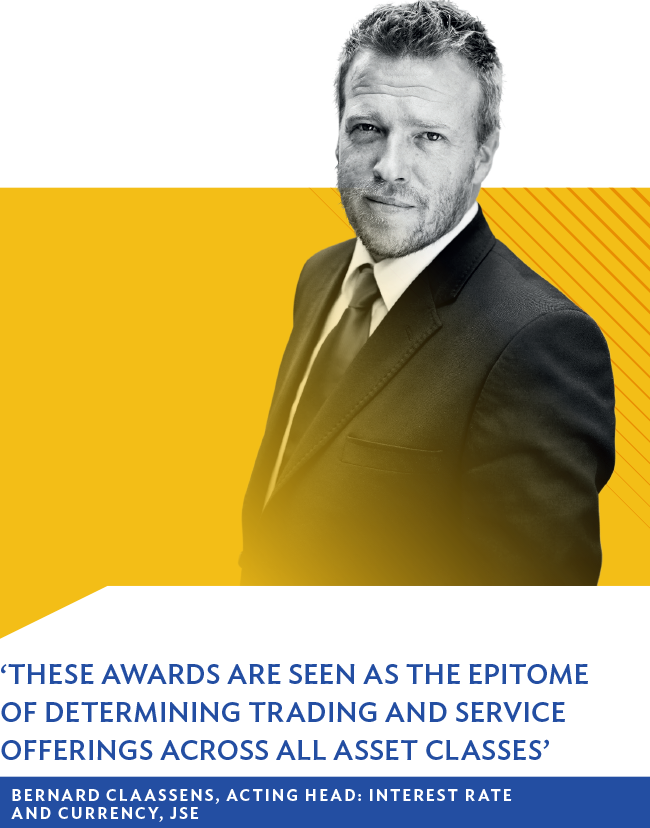 Annually new participants across all asset classes are invited or encouraged by the JSE to vote, with an excellent response rate that Claassens confirms is around 100 institutions. ‘The X-factor those institutions seek as a differentiator in terms of how they vote changes annually but what has become clear is that while the markets are small in number in terms of nominees and candidates, the Spire Award process results show that the top two organisations in the top category – Best Fixed Income and Currency Derivatives House – have never been more than half a percentage apart.

‘While certain organisations may appear to be stronger than others because of their service offerings, and given that all entrants are very client-driven organisations, over the past six years the spread across categories has evened out, whereas before it was somewhat easier to anticipate the top two winners,’ says Claassens.

‘The banks, particularly, regard the JSE Spire Awards very highly, with a number of those investing significantly in specific Spire marketing projects. That sort of buy-in indicates just how keen they are to ensure they are focused on earning an accolade. These awards are seen as the epitome of determining trading and service offerings across all asset classes.’

Two regular accolade winners, Rand Merchant Bank and Absa Capital, will be attending this year’s event, on 25 October at the Maslow Hotel in Sandton. Among the more than 300 guests will be traders, analysts, treasurers, executives and other senior financial market professionals from banks, brokerages, state-owned companies and National Treasury.