TJ Matsena, Director of Trading and Market Services at the JSE, says the exchange will keep a close watch on trading market structure and technology in the US as events unfold following the recent approval by the US Securities and Exchange Commission (SEC) – granted to alternative trading group IEX – to proceed with the launch of a new public stock exchange.

IEX would be the only stock exchange to include a so-called speed bump (a 350-millionths-of-a-second delay) in incoming and outgoing orders. The group claims the ‘speed bump’ protects investors from high-frequency traders who pick up on trading signals and use their faster technology to electronically front-run slower investors. The SEC’s sanction comes in the wake of a protracted battle between established US-based exchanges such as the NASDAQ, New York Stock Exchange and BATS Global Markets, all of which use high frequency trading (HFT) at the fastest-possible speeds without delays, and fledgling IEX.

The long-established exchanges say SEC regulations prohibit any deliberate delays in trades and price displays and are therefore opposed to the sanction granted to IEX.

Matsena says HFT accounts for relatively small numbers of trades on the JSE compared to US and European exchanges. HFT is currently also not separately regulated in SA as it is in those parts of the world although, in time it will be, he says.

In SA there are mandates in place that form part of the JSE rules and directives that govern the use of electronic access, says Matsena. The JSE does however, limit HFTs by automatically throttling the number of trades a broker may submit into the cash equities markets. Presently, the threshold is 300 orders per second, per broker. 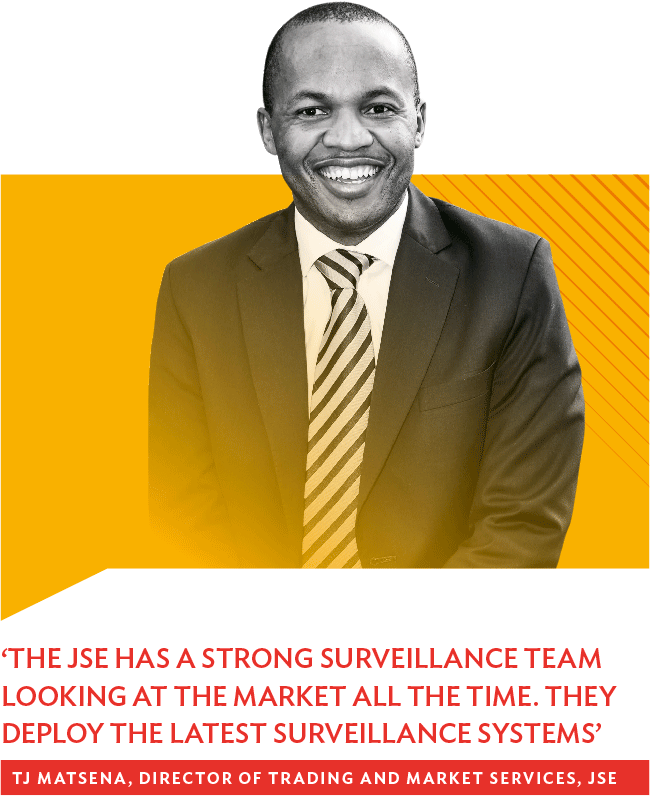 The JSE also prohibits trades in so-called dark pools that are a common feature of HFTs at different exchanges in the US and Europe.

‘The JSE has a strong surveillance team looking at the market all the time. They deploy the latest surveillance systems and techniques to pick up any market abuse,’ he says.

‘You get two types of HFT. The first is so-called “execution trading”, where a large order is executed via a computerised algorithm. The programme is designed to get the best possible price. The order may be split into smaller pieces and executed at different times.

‘The second type of HFT is opportunity-seeking trades, where the trader looks for and spots small trading opportunities in the market from which profits can be extracted.’

He adds that HFT has been in the news for all the wrong reasons in the last couple of years. ‘This is unfortunate because not all HFTs are the same. While it’s true that some HFTs have caused issues in the market – like the “2010 flash crash” in the US – they have also added a lot of liquidity in the market. I think in the next couple of years we will see more participants coming into the market using different strategies, which will make our markets a lot more dynamic.

‘Because the market is changing at a rapid pace, we need to make sure that our rules and directives keep step with the market,’ he says.

Back in the US, the SEC justified its controversial decision to allow IEX’s use of the ‘speed bump’ to trade legitimately, saying the approval was granted in terms of an interpretation under Regulation NMS, for National Market Systems. The regulator says it had determined that ‘a small delay will not prevent investors from accessing stock prices in a fair and efficient manner’, according to Reuters.

The SEC further announced its intention to consider delays of less than one millisecond at a de minimis level from now on. It added that it would also conduct a study within two years to determine the effect of intentional delays on market quality, including asset prices.