BEST OF ALL WORLDS - JSE MAGAZINE

Gone are the days when a hatchback was simply a hatchback, an SUV purely an SUV or a sedan just a sedan. Today, manufacturers are playing with body types – and expectations. So it is that the humble sedan has morphed into all manner of intriguing things.

The most popular progression is into the form of a sportback, essentially a saloon with a hatchback; all the kudos and authority of the traditional sedan, but with the convertibility of a hatchback, the lines of a sports car and none of the hatchback’s perceived mommy-wagon status.

There will likely always be a need for the traditional saloon. In its latest incarnations it is, ironically, the hub of much innovation – ingenuity that will filter down to lesser siblings in due course. It’s this amalgam of tradition and technology that makes the executive sedan the frontrunner it is. Tradition, with a twist.

Audi S8, RS5, RS7
Arguably the champion of turning the saloon into a sportback is Audi. The marque has been on a major offensive in SA, releasing no fewer than 15 new or updated sports models in the first quarter of 2021. Among the covetable machinery are three standouts, the company’s flagship S8 and two sportbacks: the astonishingly beautiful RS5 Sportback and the RS7.

The trio serve to underline the industry’s shifting focus. The S8 is an entirely conventional sedan, much like the smaller A6, A4 and A3. Although loaded with cutting-edge tech and the latest digital safety aids, it remains an Audi old-schooler, whereas the RS5 Sportback and RS7 represent the contemporary face of the company. Both feature a hatchback; both have pillarless windows and lower profiles; both accent performance over space and comfort.

Sport, essentially, is the buzz word, whether in a SUV, a sedan or a hatch. The word suggests dynamism, rapid progress, the future, say the marketing gurus. Which is not to say the S8 is dull or lacks currently fashionable toys. For one thing, it employs Audi’s bahnstorming 420 kW, 800 Nm twin-turbo 4-litre V8 petrol engine – good for a rocket-like sprint time to 100 km/h of 3.8 seconds. It also features all-wheel steering (rear-wheel steering now joins front-wheel steering for tighter turning circles), a sport differential and the marque’s latest predictive, active suspension as standard. The predictive part is important; on test the car’s ride proved remarkably even over the worst of a nasty obstacle course, intuiting what was ahead by means of cameras feeding surface assessments to a powerful electronic brain.

Still, climbing from the S8 into the RS7 or RS5 Sportback is like time travel. Not everyone will appreciate the low, hunkered-down seating or the sports-car tightness, but get past that and the experience is addictive. Both of Audi’s stars handle with remarkable poise: the V6 unit in the RS5 Sportback both agile and willing, that innate Audi lightness obvious in every touchpoint and operation.

The RS7 uses that self-same S8 V8, which translates into neck-snapping acceleration and a sound like a Zero dive-bomber over the Pacific. The current cabins of all three are astonishing, the latest digital virtual cockpits beautiful, intuitive and easy to use. Touch-sensitive screens access the car’s various infotainment and other controls; the padded seats with diamond-shaped stitching are ergonomic as well as supremely elegant; and brushed aluminium is the order of the day. Sublime. 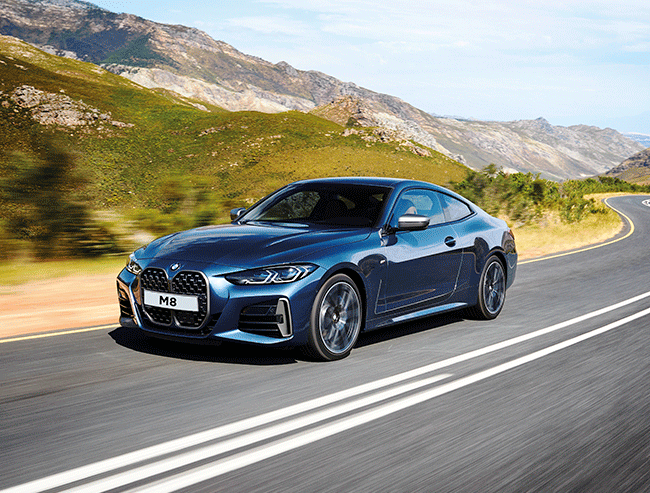 BMW M3, M8 Competition Gran Coupé
BMW’s iconic M3 had a makeover for 2021 – the 3.0-litre, in-line six-cylinder drag racer so beloved of the bullet brigade is now more tractable, less lairy in town and generally   more sophisticated. The biggest change is to the gearbox, which makes around-town pottering less stressful than it used to be; the latest 8-speed is far better at changing down and snicking imperceptibly into the required gear without complaining, hunting, clunks or hanging on to ratios. The trade-off is in shift times when you really put the hammer down or feed into a series of curves at full tilt. It’s simply not as quick as the previous box. Not too many will notice it, but then again, this is the M3 and most owners are aficionados.

The ride is better too. That has a lot to do with BMW’s multifaceted electronic chassis and dizzying array of settings. Essentially it is up to the driver to dial in whatever balance they require, whether rock-hard sports feel or comfy boulevard cruising. Suspension, chassis, gearbox, engine and steering can all be configured separately. The interior is just as configurable and it will take any owner an age to set up the ideal screens, seating positions, safety-warning levels and infotainment requirements. M3 purists will decry the digitalisation of a once-analogue experience, but hey, that’s progress.

Though the M3 is hardly compact, it feels like a toy compared to the M8 Competition Gran Coupé. In its latest iteration, employing the company’s monster V8, the four-door leviathan feels like a yacht that has been press-ganged into service as a nitro drag boat, good for the smuggler’s run from Cuba to Key West. It’s an enormous beast, easily the size of a 7-Series, and it stands testament to what can be achieved with the magic of electronics. Quite simply it seems to defy the laws of physics; that much weight really shouldn’t be able to corner that fast or with so little fuss.

The M8 is best when flattening continents –effortless, comfortable, even over terrible roads, true at galactic speeds and solid as a rock. And when the red mist descends, it plays the role of Valkyrie as if born to it (it was, of course), issuing an archaic bellow, sharpening its senses, no prisoners taken. It’s frightening, addictive, elemental. 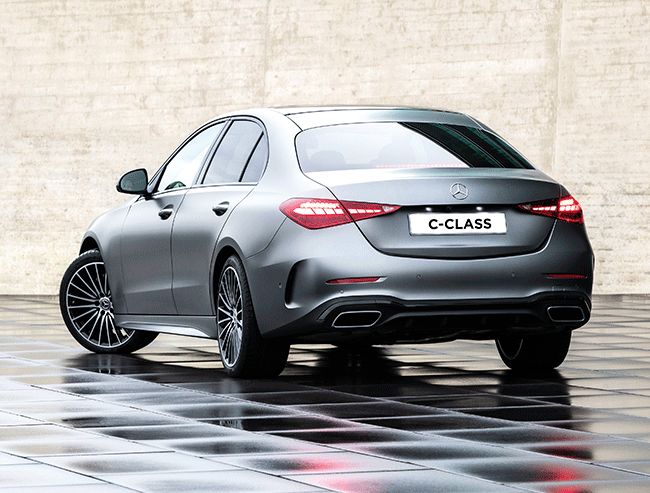 Mercedes-Benz S-Class, C-Class
A new S-Class is always big news, especially when the competition has been catching up at an alarming rate. Traditionally the electronics avant-courier, the harbinger of clever things to come, S-Class now has stiff competition, and not just from traditional rivals BMW and Audi. Lexus has stepped up of late, with its luxurious LS. Porsche too is now playing in the big sedan sandbox with both Panamera and the electric Taycan. Equally the S-Class needs to fight off its sports-star brother, the GT63 S four-door coupé. Add to that the democratisation of tech and the S-Class has a battle on its hands to stay ahead and relevant.

Visually it is not revolutionary, unlike the latest BMW 7-Series, which shocked the industry in 2019 with that enormous grille. The most obvious transformation is inside, to the dashboard, now an entirely minimalist affair – two giant screens in place of traditional driver dials and middle console buttons, confirming an industry-wide shift to electronic interactivity. Like the latest Audi S8, it also features a smart suspension system that reads the road ahead, to maximise passenger comfort. Comfort and safety are imperative to Mercedes, with much attention given to rear occupants, specifically. Larger rear screens, a centre console tablet, individually configurable sound and climate zones and, for the first time, rear airbags for frontal impact. The clever car can also raise itself up in a side collision, helping to minimise injury to occupants.

In terms of engines, SA gets the S500 4Matic with a petrol 3-litre inline six-cylinder and the S400d 4Matic with a similar diesel unit. All-wheel drive and a nine-speed automatic transmission are standard in both cases. The model range will grow through 2022, likely to include a Maybach V12 S680. Soon after S-Class is the launch of the volume-seller C-Class – arguably more important than the bigger saloon because it is made in SA for local and export markets. The new C-Class is all automatic, all four cylinder and features a selection of hybrid drivetrains. Engines will be the 1.5-litre turbo as well as the 2-litre. And even when the fire-breathing AMG C63 arrives, it is likely to be a four-cylinder unit, mapped to deliver the kind of performance noted in the A45 AMG.

Inside the C-Class is a mini S-Class, the company’s latest twin-screen dashboard a feature. That centre screen in the console is huge, but the news is that both it and the one in front of the driver can be upscaled as an option. Like the S-Class, the C-Class gets better materials inside and walks a conservative path, design-wise. Previous generations of both cars sold extremely well, so ‘don’t fix what ain’t broke’ seems to be the strategy.

Lexus IS, ES, LS
Lexus recently took the brave decision to opt for an exclusively hybrid fleet – no more V6 or unaided 2-litre in the SA line-up. Into this environment step three Lexus stalwarts, flying the flag for sedans everywhere. The compact IS, the larger ES and the flagship LS have all had updates to visuals, electronic architecture and accessories. The IS is arguably the finest looking of them all, a superb amalgam of sharp lines and delicate curves.

ES has stepped it up too – the car moves closer to the family look – while the flagship LS errs on the side of caution in its redux. Under the skin, the trio all add safety kit and larger infotainment screens, as well as a host of smaller improvements. The overarching focus for the marque is to deepen quality, says Lexus International chief engineer Tetsuya Aoki, which translates into better materials, improved sound insulation, more attention paid to the tactile nature of the owner experience. Given the high standard of previous models in all those areas, that’s no mean feat. 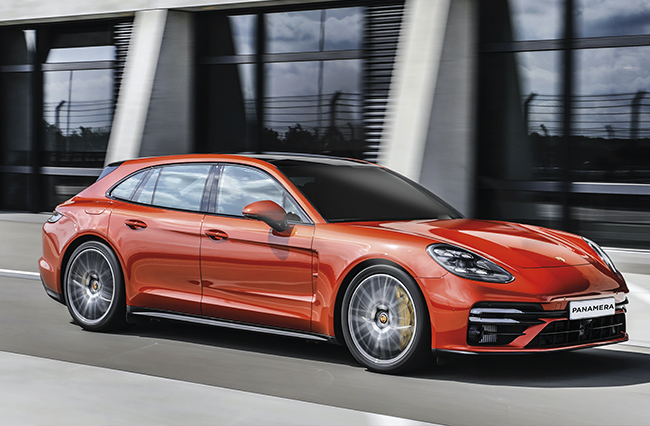 Porsche Panamera, Taycan
Porsche has negotiated the SUV/sportscar/sedan conundrum with aplomb. It is now represented in all those segments, and leading the way in electric sports mobility to boot, at least in SA. While Panamera soldiers on as the sports sedan of choice for fleet-footed directors, it’s the Taycan that is stealing all the headlines. Porsche’s ‘standard’ Taycan sports star is one of the fastest-accelerating cars ever made – but they’re not done yet. The new Taycan 4 Cross Turismo adds extra length, better headroom and the adaptability of a full hatch.

Its electric drive, 800V architecture, a high-tech chassis with all-wheel drive and adaptive air suspension does the rest. There are five versions of the Taycan in all, with the superstar Taycan Turbo S the real charger – it produces 460 kW, but with launch control dialled up, this climbs to 560 kW. That means a 0–100 km/h time of 2.9 seconds and a top speed of 260 km/h. If you use the car to take advantage of all that power it’s unlikely you’ll manage the claimed range of 420 km, but still, this is the future of motoring, and in a four-up saloon, that’s remarkable.