The global motoring community would be forgiven for believing Shakespeare’s appellation that hell is empty, and all the devils are here – semiconductor shortages, electrification legislation, climate change, COVID, global belt tightening… It’s been a hell of a time. Yet despite the challenges, much excellence was evident last year and will continue into 2022 with some excellent examples of outstanding achievers fully deserving of your attention, if not your custom.

The new year promises tempests still, though the resilience of our tested country is remarkable. In the chaos there are firm plans for expansion (Toyota, Mercedes and BMW are showing strong growth); real progress is being made in electric motoring (expect a slew of full-electric models from BMW, Mercedes, Audi and VW); and there is movement at last from the government on electric charging stations. It’ll be a bumpy ride with more to come – what’s past is prologue – but brutal lessons about adaptability have, in many cases, been learnt. The industry is now leaner, more focused – and finally getting ready for the electric storm.

Mercedes-AMG SL Roadster
A new SL is always good to see, especially when the EU eco-hounds are out for its blood. The iconic roadster lives to fight another day, cocking a snook at the Brussels lot bent on consigning anything over 900 cc to the rubbish dump of history. It replaces both the S-Class Coupé and Cabriolet as well as the AMG-GT Roadster, so needs to be good. It is. First off, the new SL is genuinely beautiful, the minimum prerequisite for the company’s historic two-door dreamboat. That hasn’t always been the case, so a round of applause for designer Gorden Wagener, who promised he’d be channelling the original 1954 300 SL Gullwing, in spirit if not actual form. Beautiful then, but also interesting – the 2022 SL has a cloth roof for the first time in decades, a two-plus-two seating layout, layers of modern tech such as air suspension and all-wheel drive and a stonking twin-turbocharged 4.0-litre V8 as a middle finger to the grey-suit grandpas. Models are SL55 and SL63, both using the V8, with the SL63 mapped to produce a muscular 430 kW. Inside it’s all S-Class, the tech and luxury evident in the giant tablet interface dominating the centre console and the cross-stitching of the gloriously comfortable seats. The roof drops in seconds and stores behind the rear seats, under a neat Porsche 911-like cover. Beautiful beast.

Mercedes-AMG E53 Cabriolet 4Matic+
The AMG E53 may look like the boulevardier many want it to be, but it also pulls like a locomotive. Which is as it should be – traditionally there’s at least six under the bonnet of any self-respecting executive cabriolet, and there’s nothing like the suppleness of a well-sorted petrol V6. And Mercedes’ current flag-bearer is one of the very best, aural, theatrical and muscular to boot. The stately E-Class droptop trades in elegance and imbues its owner with a certain relaxed savoir faire. Obvious exertion is so very middle class. 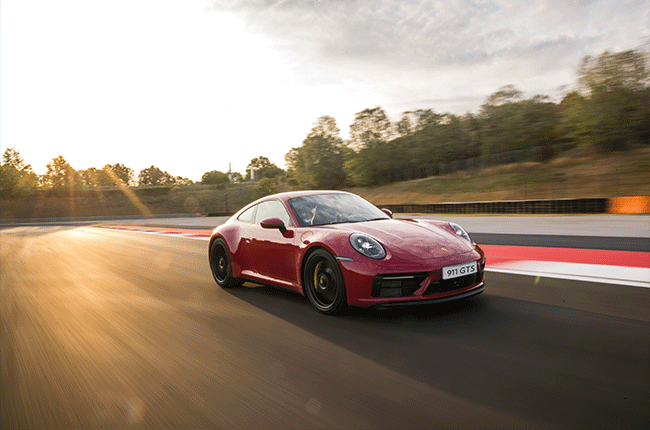 Porsche 911 GTS and Cabriolet
Fans of Gregg Hurwitz’s Orphan X series of novels will know Evan Smoak’s 10 Commandments. Second and third here – ‘how you do anything is how you do everything’, and ‘master your surroundings’. Cue the latest 911 GTS, Porsche’s champagne supercar, somewhere between the Dom Pérignon flagship Turbo and the everyman Clicquot Carrera S. It’s a fabulous beast, the GTS. For 2022 the suspension has been tweaked for comfort and handling (with componentry care of the Turbo), and it’s now louder than a mating howler monkey and quick enough to worry the Dom Pérignon lot over at whale tail central. And absolutely it’s Evan Smoak’s champ – the touch-weighting of the console buttons, the shut lines, the glassy sheer of the blackened rims – all are executed with the same obsessively Teutonic attention to detail as the nuanced response at your foot to the 353 kW flat-six Boxer, the bite of the (also) Turbo-derived brakes, the feel and precision of the steering in your hands. The second commandment then lays the foundation for the third. And it is master of its environment. The phrase ‘fit for purpose’ might have been conjured just for the GTS. Make sure it’s red. Or yellow. Not white. 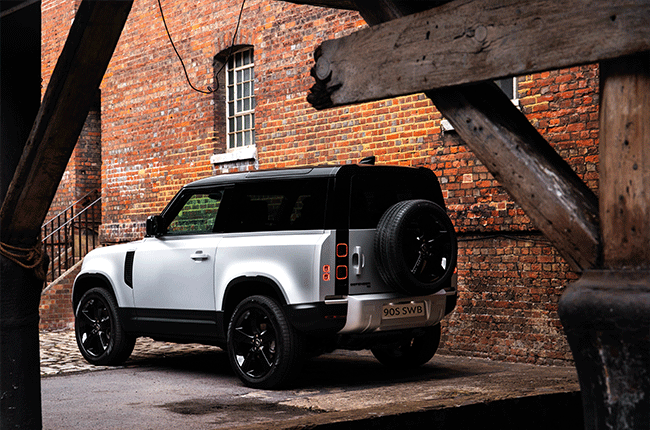 Land Rover Defender 90S SWB
Late 2021 saw the launch of the short-wheelbase 90, and what a joy it is. Where the four-door follows big brother Range Rover, the two-door treads its own path. And there’s ‘magicalising’ going on. How do you make a towering, short-wheelbase bundu basher feel and ride like a cruisy limousine, with minimal pitch and no loopy sway? The answer, of course, is an army of aids, buttons for which pepper the console.It makes for a weirdly contradictory experience – Crocodile Dundee trick-or-treating in Silicon Valley. Superbly capable of both pampering and pulling. Not so clever is the noisy (optional) fabric sunroof and the even noisier roof rack. We suggest you pocket the R90 000 and buy a standard Land Rover Defender 90S SWB instead. It’s mad to disturb all that curated hush.

Audi S8
Lawdie Audie, what a masterfully fast, entirely addictive machine. Few, if any, manufacturers manage the alchemy of light touch and searing speed quite like Audi. That they’ve managed to imbue the QEII land yacht S8 with the same brutal delicacy is frankly mind-blowing. The twin-turbo V8 is at Starfighter warp speeds before the rear TV screens have had a chance to boot up. And at those speeds, just a lot of hush – no pitch or sway; nothing to suggest continents are being flattened before breakfast. It’s also great for party tricks. There’s that rear-wheel steering, always good for entertaining the assembled (the rear wheels turn up to five degrees against the direction of steering, to reduce the turning circle by about 1m to 11.4m). Also, the leprechauns up front read the road ahead and bellow for the suspension workers to respond accordingly. It’s most fun over speed bumps, which, at a certain speed, are levelled. Of course, the idea is to make the flagship as smooth as possible at all speeds and verily, it is that. Inside it’s a glassy digital triumph, Porsche Panamera and Lamborghini Uris obvious in the touch-sensitive architecture (VW AG owns both marques). Those screens, intuitive as they are, get dirty quickly and, even though they profess to clean themselves, end up looking like a children’s party after a day’s use. And features? It goes without saying that the S8 does everything short of tie your shoelaces. Especially intriguing are the noise-cancelling Bang & Olufsen speakers, which detect disturbing noises and produce their own sounds to cancel the din. Very clever, those Danes. The $64 000 question is, of course, is it better than the Mercedes S-Class or BMW 7 Series? It is. Especially if individuality is paramount to the buyer. People actually like you in an S8, wave happily, move over, want to chat. No dark mutterings about capitalist exploiters amid a forest of middle fingers.The S8 owner gets BMW’s balance, Mercedes’ luxury, and the approbation of fellow motorists. Now, about those rear end looks…

BMW 520d M Sport
What’s the accountant’s BMW doing on a must-have list? The answer is that the 5 Series has come a long way in a short time and deserves much praise. If the current model were a spirit animal, it would be an eland – long, powerful gait, excellent at eating up distance with little obvious effort. Our test unit was the colour of the big guy too, very fetching, ideal for hiding the accumulated gunk thrown up by the byways of our challenging road system. On the road it’s as quiet as a Trappist priory inside, even when putting yet another entitled SUV right-laner in their place (left lane, good man, left lane). We managed a trip average of 6.3 litres per 100 km (5.1 litres going up the Garden Route, with a howling tailwind, believe it or not). It’s also quick, the 400 Nm of torque ensuring effortless, senatorial progress while being supremely cosseting, rock solid through the passes and engaging to boot. We could have carried on to Mozambique. 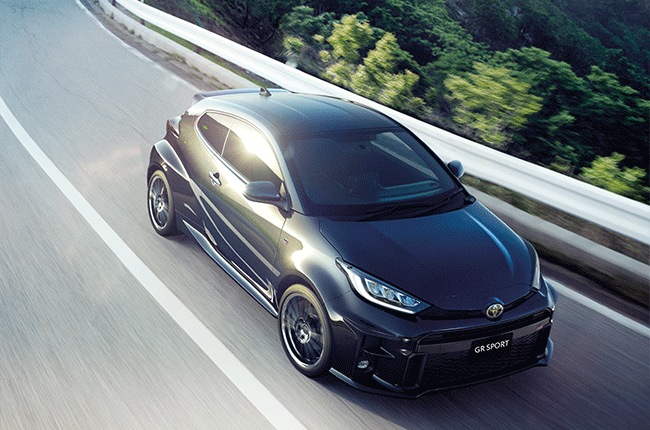 Toyota Yaris GR Sport
Toyota’s assault on the sports market continues with the roll-out of GR Sport models across the range. And surprise, surprise, this little fellow is far and away the best of them (to date). That’s no wonder – the passion project of CEO Akio Toyoda and WRC champion Tommi Mäkinen, the cyborg Yaris got everything it needed, no expense spared. Witness the all-wheel drive, the monster turbocharged 1 618 cc triple cylinder, the extra-wide track (with a hybrid chassis, part-Corolla, part-Yaris), aluminium and carbon-fibre details, double wishbone suspension to handle the 360 Nm of torque, a rock-solid manual gearbox and clutch to cope with 200 kW, and big old clappers to bring it to a halt on a ha’penny. The result feels bespoke – and exhilarating. In gear, acceleration is astonishing; 5.5 seconds to 100 km/h doesn’t sound particularly special but the drama, the brutality of the shove is mesmerising. Suctioned to the road, it’s unperturbed through tight S-bends (though there’s a certain rubberiness to the steering at the limit) and hurtling down a highway it’s a .243 out of a Winchester – true and unstoppable. The temptation to just bury your foot is enormous. Negatives? It’s noisy on bad surfaces, tight inside for six-footers, nearly impossible to see out of the back, has a ridiculously small fuel tank and doesn’t like being off the turbo in town. But none of that matters. It’s crazy, crazy fun to drive, fabulous to look at and worshipped by all who encounter it. World Rally Championships in SA. What a lot of fun.

BMW M4
In the middle of testing BMW’s latest M4, it occurred to us that most of the admirers were under the age of 25. That’s interesting, because BMW is dead keen to make its flagship sports stars (the M3 included) more desirable to the youth. To that end they’ve introduced a range of peculiar colours and trim options. Our test unit was green outside and baby blue inside. It leads us to suspect that the monied classes are much changed since wealthy types bought the first BMWs back in the dark ages (the 1970s). Those were gold with brown leather. Even a black interior was deemed a bit racy; the smarter the car, the greater the expectation of subtlety. No longer, clearly. M4 is meant to announce itself, mechanically as well as visually, so lime green works along with the keening wail, ideal if you’re a footballer or the person who invented the revolving toilet. Entrepreneurs. Early adopters. Free State cheese farmers. Once you’ve parted the Red Sea of pubescent idol worshippers, negotiated the rally form solid-state seats, found the red start button (between the seats) and set the adaptive electronics to Terrify Yourself, all is as expected. Blurry. Brow furrowing; 375 is an awful lot of kilowatts, especially if lime-green, carbon-fibre everything has reduced the weight to that of a Suzuki S-Presso. Well, almost. The trick is not to stop, though it’s as good at that as it is at going. Because, as soon as you do, the crazies, the Zombie army of bedroom fans, descend. It’s a bit like being a buffalo in northern Kruger – slow down and the tsetses limpet onto your bum. Or splay across your bonnet. The Samsung selfie, we can tell you, is perfectly possible at speeds up to and including 26 km/h, after which the platform trainers become a liability.