The speciality finance sub-sector on the JSE, with a combined market cap in excess of R40 billion, comprises companies operating in the non-bank or alternative finance space, a significant number bearing the characteristics of traditional investment holding companies. Together, the companies in this sector hold stakes in hundreds of businesses, many of which are household names (or which own brands that are), across radically diverse sectors. These include TymeBank, Rain, Sportsmans Warehouse, Burger King, Weet-Bix and Twinsaver.

Transaction Capital is the largest by market value and at almost R11 billion equates to about a quarter of the listed sector. The group comprises two divisions: SA Taxi and Transaction Capital Risk Services. The former is a vertically integrated business that ‘provides a comprehensive financial, insurance and allied services offering to minibus taxi operators. The division offers a unique blend of vehicle procurement, retail, repossession and refurbishment capabilities with asset-backed developmental finance and insurance for focused vehicle types’.

In November it sold a 25% stake in this business to SANTACO, the national body that represents the industry, for R1.7 billion. Future dividend flows will be used to settle debt, with a 10% ‘trickle’ flowing directly to a trust being set up to represent the body’s provincial structures. While Transaction Capital promotes its risk services unit as ‘a technology-led, data-driven provider of customer management solutions in South Africa and Australia’, it is at its core a collections business. It either acquires non-performing loan portfolios and then collects against those, or it acts as an agent on a third party’s behalf. 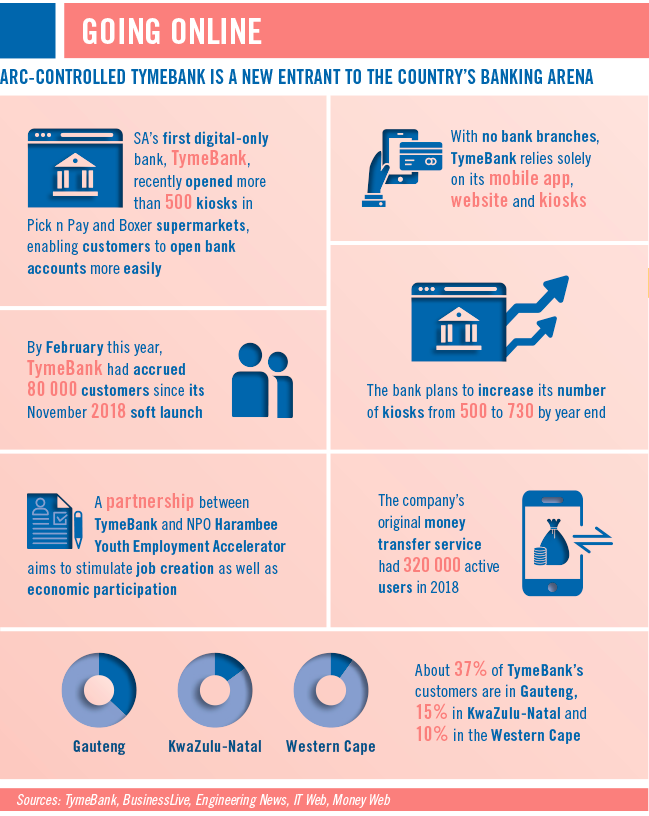 In the 2018 financial year, the group reported headline earnings of R682 million, with just more than half coming from SA Taxi. After listing on the JSE in 2012, it says it has delivered a total shareholder return, compounded, of 40% annually from 2013 to 2018. Trustco, dual-listed on the Namibian Stock Exchange and JSE, has operations across the insurance, banking and finance, and resources sectors, primarily in Namibia. It holds a commercial banking licence, one of eight in the country, for Trustco Bank Namibia. It also operates a life insurance business and a short-term insurance one. The insurance business has used the funds from policyholders to invest in a number of properties. The relatively new resources segment owns a number of diamond mines.

Zeder Investments, a PSG Group company, invests in the agribusiness sector. Zeder says PSG ‘sought a vehicle through which to consolidate its diverse holdings in the broad agribusiness industry’ in the early 2000s. The business was listed on the JSE in 2006, and its portfolio comprises a 27% stake in Pioneer Foods; a 29% stake in egg producer Quantum Foods; and 40.9% in agri-focused retail group Kaap Agri, all listed on the JSE. Pioneer is one of the country’s largest food producers and owns well-known brands such as Weet-Bix, Liqui-Fruit, Ceres, Sasko, Safari, Spekko and White Star.

Zeder also has a 96.9% stake in fruit distribution and marketing outfit Capespan; 93.5% in seed business Zaad Holdings; and 56% in Zambian grain operation Agrivision Africa. It says its portfolio ‘has gone through a process of refinement in the past years’ as it has ‘moved from several smaller investments to fewer, larger commitments’.In 2018, it reported recurring headline earnings of R474 million. It values its portfolio on a sum-of-the-parts basis, publishing a sum-of-the-parts value per share in mid-March of R5.87, versus a market price of R4.30.

Two of the companies in the sector, ARC Investments and Ethos Capital (EPE Capital Partners), look a lot like private equity groups. Both have similar structures, in that they are based in Mauritius and effectively hold stakes in a portfolio of businesses, alongside their major shareholders. In essence, they offer a way for investors to access these investments. ARC Investments, with a market value of R5.2 billion, holds a 49.9% stake in African Rainbow Capital’s financial services business, along with direct interests in a number of other sectors, including telecoms; business process outsourcing; mining; construction and energy; property; agriculture; and private equity. It says the intrinsic value of the total portfolio as at the end of 2018 was R8.567 billion.

Among ARC Investment’s portfolio of diversified investments, data-focused network operator Rain, in which it holds a 20% stake, accounts for R2.3 billion in value. It also owns 36.7% of TymeBank, a new entrant in the banking arena. TymeBank sells itself on being simple and ultra-low cost, and is heavily digitally focused. The financial services holding company (co-owned by ARC and the ARC Fund) acquired control of the bank in November. Independent analyst Chris Gilmour says: ‘ARC Investments is regarded by some analysts as “the new Remgro” with its great diversity of interests.’ He says the group ‘has made some really fascinating strategic investments like Rain, many of which are unlisted and … can only be accessed via ARCI itself. [It] is unashamedly in it for the long term and visionary founder Patrice Motsepe understands the nature of long-term investment exquisitely’. 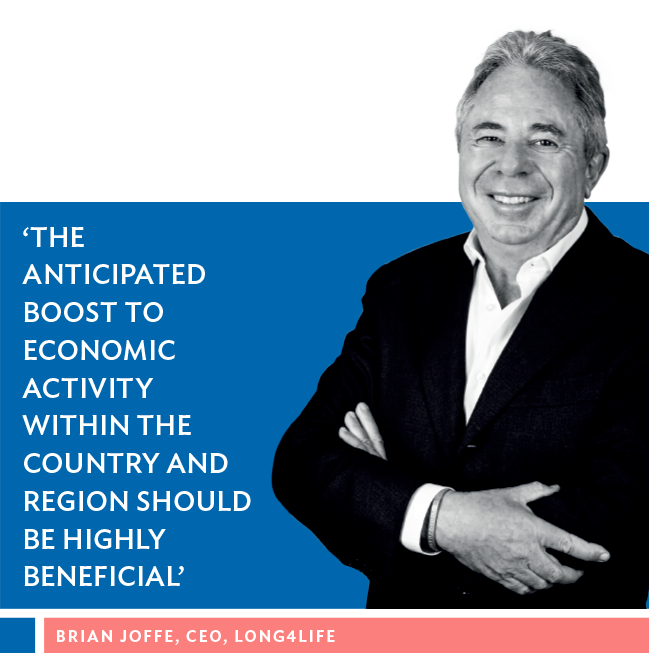 Ethos Capital owns stakes in Ethos Private Equity’s funds and co-invests alongside the funds themselves. An example of this is Ethos Capital’s direct investment alongside one of Ethos Private Equity’s funds in Primedia. At the end of the 2018 financial year, it had R1.9 billion in total assets, with stakes in 17 portfolio companies in diverse sectors, including Twinsaver, Autozone, Echo (telecoms), Primedia (owner of 947, 702 and KFM, among others), Kevro and Channel VAS (a credit airtime service provider to mobile network operators in more than 30 countries).

Long4Life is veteran entrepreneur Brian Joffe’s lifestyle-focused investment group, which listed on the JSE in April 2017. Its three main business segments are sport and recreation, beverages and personal care and wellness. The sport and recreation segment comprises Sportsmans Warehouse, Outdoor Warehouse and activewear producer Performance Brands and accounts for 60% of Long4Life’s revenue. These businesses used to be listed on the JSE as Holdsport, before being acquired by Long4Life. The beverages division comprises Chill Beverages and Inhle Beverages, and both are contract manufacturers and produce their own brands. Perhaps the best-known brand produced by Chill is the Fitch & Leedes range of mixers.

The personal care and wellness division is the newest in Long4Life and comprises the Sorbet group of operations. Long4Life is strongly acquisitive and as at end-August, it had cash resources of R1 billion available. It says its ‘strong balance sheet and the gearing optionality derived from cash-generating businesses provide a basis for further acquisitions. These are continually being assessed and anticipated to lead to the addition of exciting new opportunities’. At the end of 2018, Joffe said: ‘Long4Life’s formation has been cautious and measured, and it has created a superb platform from which to grow. We have had a small, humble beginning, but our vision remains as big and bold as ever.’

He added: ‘South Africa’s changes and challenges over the last year have been significant. The new political leadership is quickly identifying and dealing with the most pressing issues of re-energising the economy, ensuring job creation and dealing with corruption. These challenges will all take time to resolve, but the anticipated boost to economic activity within the country and region should be highly beneficial to South African consumers. Long4Life’s assets are ideally positioned to capitalise on this expected and positive trajectory.’

AEEI, or African Equity Empowerment Investments, is the former listed Sekunjalo Investment and values its total assets at R7.4 billion, as at the end of 2018. The group has stakes in a number of sectors, including fishing, events and tourism, health and beauty, bio-therapeutics, technology (via its associate Ayo Technology) as well as strategic investments (primarily a 25% stake in SAAB Grintek Defence). The bulk of the group’s revenue comes from its 55% interest in Premier Fishing and Brands, which it listed on the JSE in 2017. Events and tourism is the other major contributor, with its flagship property being the Cape Town International Jazz Festival, staged by portfolio company espAfrika.

Grand Parade Investments, historically an empowerment shareholder in a number of casinos in the Western Cape – primarily GrandWest – secured a licensing agreement to roll out Burger King across the country. This saw it move from a company that had a passive portfolio to actively managing operations. It achieved its first target of rolling out 80 stores last year, with a current footprint of 84 outlets. In the six months to end-December, its Burger King unit reported revenue of R495 million. It had hoped to mirror this strategy with two other US brands, Dunkin’ Donuts and Baskin Robbins, but reversed this strategy in early 2019. Grand Parade has also built up a 17.5% stake in Spur Corporation. 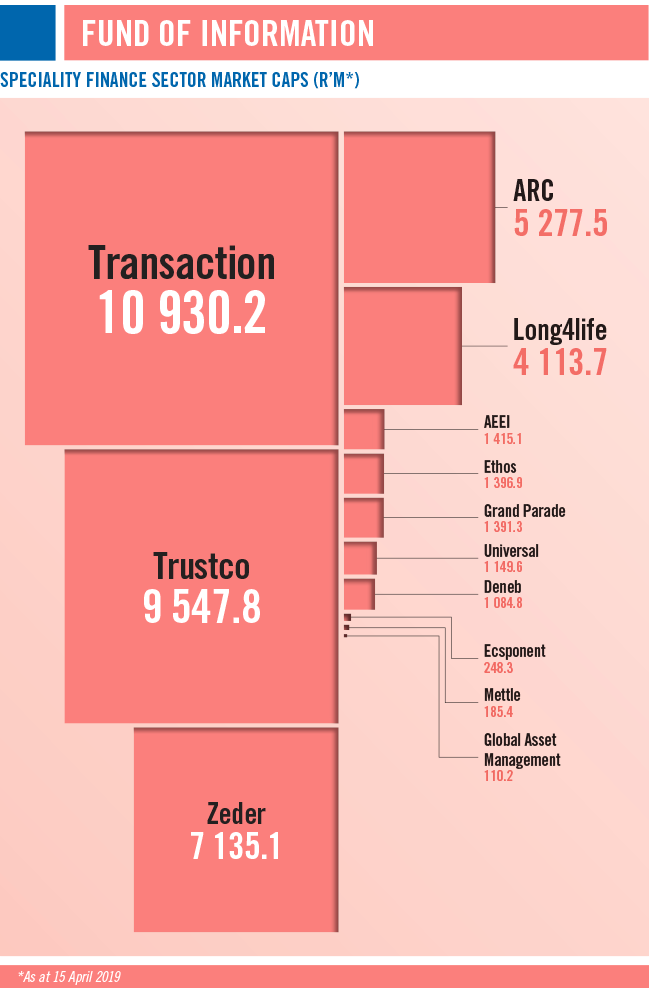 Gilmour highlights the fact that ‘Grand Parade has committed to making Burger King a part of the SA fast food industry – against all odds, it has succeeded in making an operational profit and is probably not too far from making an overall profit. It was a gutsy thing to do and exemplifies the type of approach that is required for success in this sector’. Universal Partners has a primary listing on the Mauritius Stock Exchange, with a secondary one on the JSE. It invests in growth businesses in the UK and Europe, and raised £72 million in its initial public offering. It has made five investments in healthcare; sanitation; automotive; as well as financial and professional services sectors.

Deneb Investments is one of many businesses spun off or separately listed by Hosken Consolidated Investments (HCI) over the past few decades. These include eMedia Holdings, Niveus Investments, Montauk Holdings and, most recently, Hosken Passenger Logistics and Rail. Reporting revenue of R3.2 billion in the 2018 financial year, Deneb comprises four divisions – branded product distribution; industrial manufacturing; textile manufacturing; and properties. The two manufacturing units are specialised and niche and won’t be familiar to consumers. Its branded product distribution business, however, supplies to the local market well-known brands such as Disney, Columbia, Slazenger, Dunlop, Canterbury, Microsoft X-Box, Sharp electronics, Speedo and a number of popular toys and games.

The three smallest companies in the sector –Ecsponent, Mettle and Global Asset Management – together have a market value of just more than R540 million. Ecsponent offers secured credit and enterprise development funding to small and medium businesses, and also has an investment portfolio, with holdings in financial services, digital media, renewable energy and healthcare businesses. Following a restructure, Mettle’s core operation is ‘Reward’, a loan and invoice-discounting provider to UK SMEs.

Far smaller, Global Asset Management is focused on project and structured finance. ‘Most if not all of the companies in this sector rely on the underlying health of the SA economy, so the current state of the economy isn’t helping,’ says Gilmour. ‘But that can’t last forever. One only has to walk into a Sorbet salon to see how great the demand for its services is. Once the economy turns, Sorbet – and most of these businesses – may find it difficult to keep up with demand.’