There’s a certain peculiarity that asset managers are listed on the very thing they invest their clients’ funds in: the market. As Small Talk Daily Research analyst Anthony Clark puts it, ‘these businesses are basically a geared play on the stock market, given they tend to invest in the market they operate in’.

Most list initially to enhance their profile, increase awareness and for marketing reasons, says Clark. Of the nine listed asset managers on the JSE, two smaller players – Sygnia and Anchor Capital – came to the bourse for these reasons. Asset managers are capital-light businesses, he explains, and ‘pay out virtually all of their income in dividends’. They therefore do not need to list to raise capital.

The entire sector on the JSE has a combined market value of about R118 billion. The two largest asset managers by market cap are both listed in Johannesburg and in London: Quilter and Ninety One. Their similarities don’t end there. Both were unbundled from larger, well-known financial services businesses. Quilter was unbundled by Old Mutual in 2018 as part of its managed separation process. This saw it split the business into the UK-based wealth management business (Quilter, previously Old Mutual Wealth) and Old Mutual Limited, a newly created holding company in SA, with operations in this country and other emerging markets. Finally, the parent company also unbundled most of its 52% in Nedbank to shareholders.

Quilter, with a market value of R58.2 billion manages about £100 billion in investments for close to 1 million clients, primarily in the UK. These assets are split between advice and wealth management units and a larger wealth platform business. Quilter CEO Paul Feeney said in March that the year ‘began well, but the sharp coronavirus-induced market correction beginning in late February has created a level of uncertainty as to the outlook for the remainder of 2020’. He added that it remained ‘too early to ascertain what impact market volatility will have on investor sentiment, net client cash flow and the consequential impact this may have on revenues and profitability’. In June, he confirmed that the positive trend in Quilter’s inflows during the first quarter continued into the second.

Ninety One, formerly Investec Asset Management, was demerged from its parent Investec in March. Despite recoiling equity markets in March, the unbundling proceeded largely as planned. The only change, made just days before, was that Investec would no longer sell 10% of the company to new institutional shareholders. It has kept its 25% stake. The business was founded in 1991 (hence the name) by Hendrik du Toit, who is CEO. The group –which has a dual-listed structure, meaning that both the local (ltd) and UK (plc) entities are traded – had £103.4 billion in assets under management as at end-March. It has grown, largely organically, from just £40 million in 1991. The bulk, around £67 billion, are assets managed for clients outside Africa. Of these, the UK is its largest market, followed by the Asia-Pacific region. The Americas and the rest of Europe are broadly similar at about £14 billion in assets. It is unique in that it is one of a few management firms to have built a substantial global footprint from emerging-market beginnings.

Following the separate listing, Ninety One’s management and staff now own 21% of the business. Du Toit, in a June letter to staff and clients, said ‘while we are physically distanced, as is currently the case, we ought to work even harder to nurture and maintain our culture. This culture of ours is unique, has developed organically over three decades, and has become key to our success. It has been built on a foundation of entrepreneurship and our “founder-owner” mindset’.

As with other asset management firms globally, the impact of COVID-19 has been felt in challenging market conditions. Inflows have held up and operationally, Ninety One – like its competitors – has been able to successfully operate and service clients remotely. 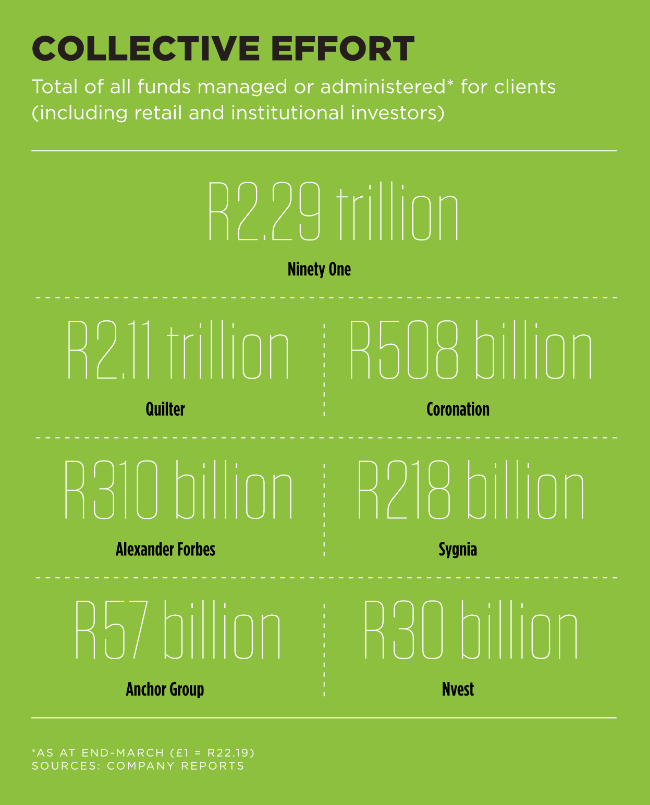 In response to SA’s economic situation, Ninety One has launched the R10 billion SA Recovery Fund in partnership with Ethos Private Equity. Nazmeera Moola, head of SA investments, says the fund will raise capital from institutional investors and is geared to assist businesses that were viable before the pandemic but are now facing ‘severe pressure’. Moola says Ninety One estimates the market will need between R50 billion and R100 billion in funding over the next three years.

Clark says that both Quilter and Ninety One offer SA investors exposure to markets that they cannot get locally. He cites the ‘very large international angle’ with Ninety One. But he does note that because Quilter operates predominantly in the UK market, risks specific to that economy, such as the uncertainty over Brexit, will impact the market, and therefore the business directly.

Coronation was founded in 1993 by a group of investment professionals with an objective ‘to build a world-class, investment-led and independent fund manager’. It is one of the largest active managers in the country, meaning that its investment funds are run by managers who make specific stock-selection decisions. At the end of March, it had a total of R508 billion in assets under management.

At the end of May, it said ‘the COVID-19 pandemic has impacted financial markets with a swiftness and ferocity normally only seen in a classic financial crisis, pushing the world economy into a recession. In a matter of weeks, global equity benchmarks fell from record highs into bear markets. In South Africa, although the initial early response to controlling the virus should be commended, it is evident that the huge economic cost of the lockdown has already exacted a very hefty toll on our country.’ 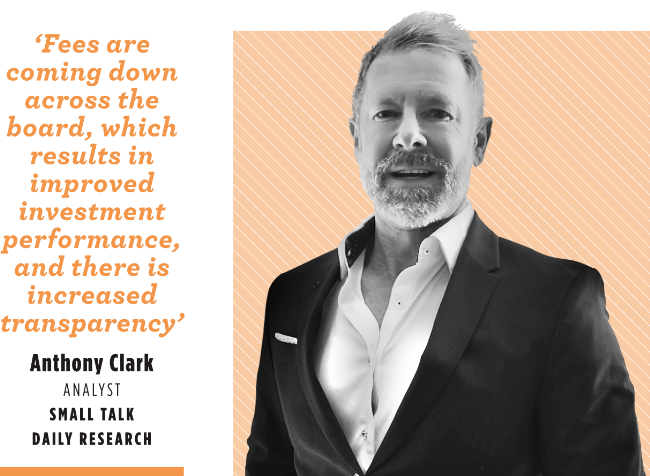 It highlights that ‘these certainly are extraordinary times, and with so many unknowns and no immediate solutions, the reality is that there remains large-scale uncertainty in the global economy. In these conditions, we believe that active management has a significant role to play, not only in mitigating both sector- and stock-specific risks but, our proprietary research and valuation-driven investment approach will assist us in identifying investments that are resilient and offer the best upside potential for our clients’ portfolios. While we are mostly positive on expected returns from current levels, it is too early to forecast outcomes, as we have no way of know-ing how the crisis will ultimately play out’.

In recent years, Alexander Forbes – with a market value of R6 billion – has transformed its business model to one focused on delivering advice to clients across the investment, healthcare and retirement spheres. This means it is becoming increasingly capital-light as it divests units, such as insurance. Its shareholding structure has also changed significantly. Consulting firm Mercer, its previous anchor shareholder, has divested much of its stake, with Patrice Motsepe’s African Rainbow Capital increasing its stake to 33.9%.

The group manages and administers a total of R310 billion in assets (at end March), with in excess of 900 000 clients in its retirement business, and more than 200 000 in its healthcare one.

CEO Dawie de Villiers says that ‘after robustly stress-testing various scenarios for our business, driven by COVID-19 and the sovereign downgrade, we are now confident that we will be able to navigate steadily through these turbulent economic times’.

Peregrine Holdings, which has been listed for more than two decades, operates in SA, the UK and the Channel Islands with four business units: Citadel is a traditional wealth manager; Stenham Asset Management is an offshore discretionary investment manager; Peregrine Capital a more typical asset manager; while Java Capital is a corporate financier. It is selling Stenham, having already disposed of half to management, and has a total of R142 billion in assets under management across the group. It announced in March that it had received an offer from private equity group Capitalworks, which will likely see it go private by September.

Sygnia, self-styled disruptor of the local industry, has helped force management fees lower with its passive investment-focused approach. Its value proposition is that it will deliver the performance of different market indices through index-tracking funds at low cost. This is in direct contrast to active managers who rely on specialist fund managers to allocate funds to certain asset classes, and to certain assets (such as stocks) in those. Sygnia founder and joint CEO Magda Wierzycka has a track record spanning nearly 30 years in the local investment industry. The company has R218 billion in assets under management and administration, with the bulk (R184 billion) from institutions and pension funds. It is also one of the largest ETF managers in SA, after buying the local db X-tracker business (since rebranded as Itrix) from Deutsche Bank in 2017. 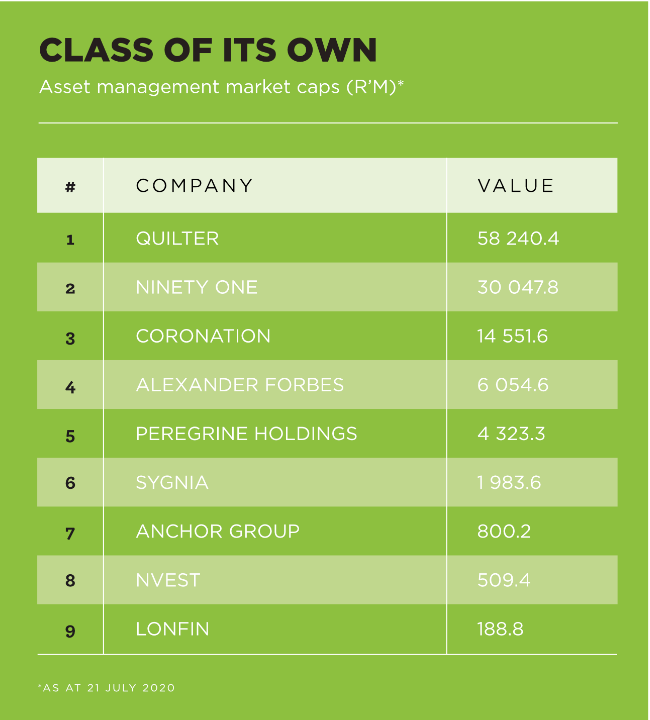 Clark says Sygnia has benefited from efforts by Treasury to reform the retirement industry. Fees have become a big issue and trustees of pension funds increasingly have to allocate portions of their funds to lower-cost passive managers. This has helped drive a ‘rotation between the different asset managers’ in SA.

Anchor Group is most well known for its Anchor Capital asset management business as well as its founder Peter Armitage, another investment professional with decades of experience in the sector. It offers what it terms a ‘complete local and offshore product and service offering’ with offices in SA, Mauritius and London. From a standing start in 2012, it has built up R57 billion in assets under management and advice, across its asset management, private clients and stockbroking divisions.

Smaller Nvest Financial Holdings (with a market value of around R500 million) is a wealth-management business, with niche operations in insurance and property services. It has R30 billion in assets under management and administration. London Finance and Investment Group, meanwhile, is listed on the LSE and JSE, and holds two strategic investments as well as a general portfolio of 30 businesses spanning the food and beverages, chemicals, natural resources and tobacco sectors.

It is undeniable that COVID-19 and the impact of lockdowns globally will see a rise in unemployment. This, says Clark, will impact all asset managers through significantly lower flows into the broader retirement fund industry, larger (and earlier) asset withdrawals from savings, and possibly structurally lower employment for some time to come. ‘Add to this the impact of regulatory changes and significantly more competition, and this certainly paints a picture of a challenging operating environment.’ But, he says, disruptors have proved that they can up-end the asset and wealth management market.

‘Fees are coming down across the board, which results in improved investment performance, and there is increased transparency for clients.’ The undoubted winners are savers.